Mr. Wilbur is a creative triple Piscean(Sun, Mercury and Uranus) with Jupiter and Saturn opposing the Pisces planets from organised, common-sense Virgo. An interview with the poet (HERE) suggests to me that the two Virgo planets, opposing the Pisces cluster, may have inclined Mr Wilbur away from abstract and inaccessible modern styles of poetry writing, and towards the traditional: 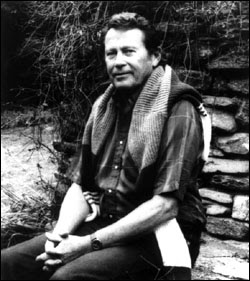 "No poet of his generation has been more committed to careful, organized expression or has more thoroughly mastered the forms and devices of traditional poetry; this conservative aesthetic and his deep love for “country things” link Wilbur to the Roman poet Horace and to his fellow American Robert Frost"

Richard Wilbur's poetry, for the most part, rhymes, unlike that of many of his contemporaries. He says:

"So I never felt I was electing to be “old hat” from the start. It seemed a kind of poetry that anybody at the moment might like to write, and indeed many people were doing so. It wasn’t really until the ’60s that there was a general turning away from so-called formal verse." 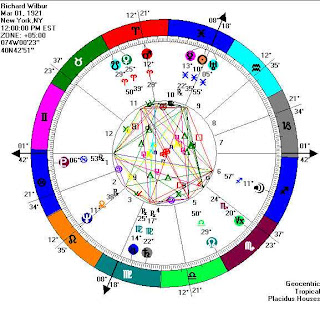 I chose this poem from a selection of Richard Wilbur's poetry for its simplicity and ever important message.

Securely sunning in a forest glade,
A mild, well-meaning snake
Approved the adaptations he had made
For safety’s sake.

He liked the skin he had—
Its mottled camouflage, its look of mail,
And was content that he had thought to add
A rattling tail.


The tail was not for drumming up a fight;
No, nothing of the sort.
And he would only use his poisoned bite
As last resort.


A peasant now drew near,
Collecting wood; the snake, observing this,
Expressed concern by uttering a clear
But civil hiss.


The simple churl, his nerves at once unstrung,
Mistook the other’s tone
And dashed his brains out with a deftly-flung
Pre-emptive stone.

Security, alas, can give
A threatening impression;
Too much defense-initiative
Can prompt aggression.
Posted by Twilight at Saturday, March 01, 2008

A handsome devil to boot, T. I love the poem.
XO
WWW

Yes - cute! I like the sweater draped nonchalantly across his shoulders - very suave! ;-)

Hey! We men are more than just sex objects, don't ya know? One day there'll be equal rights for males in America, and then such talk'll be pounced on. "Sweater draped nonchalantly across his shoulders", indeed!

If you men don't want to be sex objects, then you should stop tantalising us with niftily placed sweaters. What are gals to do in the face of such titilation? ;-)