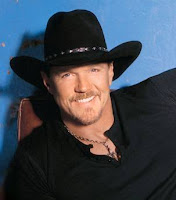 On Friday evening Bill Maher had Trace Adkins as one of his guests on his show "Real Time". By the way, John Townley recently wrote a brilliant interpretation of Bill's natal chart. HERE).

I'm sworn off country music and its attendant politics, so wasn't too impressed when I saw Trace sitting there complete with black Stetson hat. He didn't have much to say, as it turned out. He did come out with a couple of funny one-liners though which warmed me to him, and he does have a gorgeously deep speaking voice.

Next morning curiosity overcame me and I looked at his natal chart, or a 12 noon version of it. Ahaaa! Another Saturn Hybrid. Born 13 January 1962, Sarepta, Louisiana. Of course, 1962 was the year of the Aquarius pile-up. Garth Brooks and Clint Black, two other country luminaries, came into the world a few weeks later.

All Trace Adkins' personal planets, except the Moon, are in Capricorn or Aquarius. Moon could be in Aries or Taurus depending on birth time, but because of his musical background I'd guess Taurus. Ascendant is unknown. 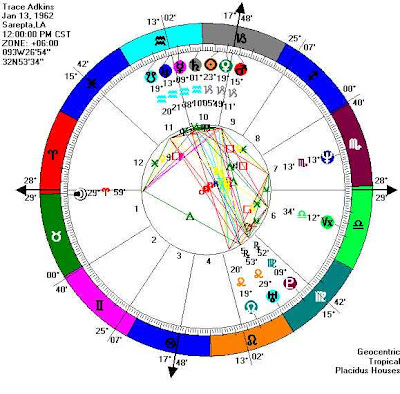 Via Google links, I found that Trace Adkins has written a book, "A Personal Stand, Observations and Opinions from a Freethinking Roughneck", in which as well as the story of his early life, he gives his views on many things, politics, the state of the world and the USA included. This is probably what gave him credentials enough to appear on Real Time. He had also been interviewed by Hannity and Colmes in December. There's a transcript of that interview HERE. It throws some light on his political views, which do indeed reflect a mix of Capricorn and Aquarius, as does his chart.

A good illustration of what I see as the Capricorn/Aquarius mash-up appears in this extract from his conversation with Alan Colmes. There's a typical conservative view muddled up with a decidedly more Aquarian stance here - and he's not "saying which one's better":

COLMES: You say in the book, you say "liberalism is less moral and more civil and conservatism is more moral and less civil."
ADKINS: Yes.
COLMES: What do you mean by that?
ADKINS: When I wrote that particular line, I was in the context of the way that we deal with the rest of the world is really what I was trying to say. And what I mean by that is I feel like liberals tend to just give everybody a pass, no matter what kind of egregious acts they may be perpetrating on...
COLMES: You really think so?
ADKINS: I do. I do.
COLMES: Have you heard about any of the Republican congressional scandals over the last year or so?
ADKINS: Dealing with international...
COLMES: Just dealing with sexual hijinks, dealing with all kinds of things.
ADKINS: Well, that's not what I was talking — that's not what I was talking about.
COLMES: I wanted to give your audience a chance to know what you're talking about.
ADKINS: Well, I'm trying to say it's in the way that we deal with the rest of the world. And I think that conservatives from time to time will try to force their moral objectives on somebody else, and they will do it sometimes at the point of a gun and be a little less civil about it, is the point that I was trying to make. I'm not saying which one's better. But that was an observation I was making.
COLMES: A lot of people — a lot of people think that going and trying to install, let's say, democracy at the point of a gun or a bayonet doesn't really work that well, as evidenced by some of the fallout we've seen from having done it over the last few years...

I prefer Trace Adkins' approach to that of some other flag-waving country singers, he obviously thinks for himself about issues, rather than simply following the herd and pandering to the crowd. But I'm still sworn off country music.
Posted by Twilight at Sunday, January 20, 2008

They're the good gals, yes! They got the cold shoulder from the country music establishment, though.
:-)

Twilight, an interesting blog. I happened on it because of the Trace Adkins link and have to ask what does it all mean? What does it tell us about Trace?

He's mostly a mix of Aquarius and Capricorn, which are signs both ruled by Saturn, but are quite different - almost opposite in some ways. Aquarius is forward-looking, humanitarian, smart and inventive, a bit rebellious. Capricorn is more business-oritented, serious, a bit old fashioned and strict in many ways. So I'd guess that Trace has some of each in his personality. A bit of an enigma to those who know him well, maybe.

Also, if you Google the two signs and read a few descriptions, you can imagine how a blend of them would turn out.

It's a pity we don't know Trace's time of birth so can't know his rising sign which also plays a big part in his personality, also time of birth would tell us exactly where the Moon was - also important. At 12 noon (in the chart I printed) it was right at the end of Aries. If he was born later in the afternoon/evening Moon would have moved to Taurus.
Aries Moon would indicate impulsiveness, impatience, Taurus a more steady, stubborn earthy type.

So what we can know from the info we have available is sketchy, but there's no doubt that Aquarius and Capricorn will play an important part in his personality.

Thanks for stopping by. :-)