Lord Longford - The Perils of Neptune ? 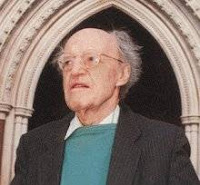 The Golden Globe Awards whizzed past on Sunday evening's TV, barely pausing to draw breath! Thanks to the writers' strike here in the USA the usual glitz, glamour and sappy acceptance speeches were missing - no bad thing in my opinion!

Among the nominations, with its leading actor winning an award, was a TV film, "Longford". I was curious to see it, and luckily found a used copy of the DVD in our local video store yesterday.

I clearly remembered the brouhaha in the UK press at the time when Lord Longford campaigned for the parole of Myra Hindley, an infamous child murderer involved in the killing of five young innocents. He was a regular prison visitor, and champion for all those he saw as outcasts of society. This film provides fascinating insight, especially for someone with an interest in astrology.

Lord Longford, because of his aristocratic title was entitled to take part in The House of Lords - one half of Britain's parliament. An archaic relic of times past, and one which in my opinion should be abolished. But that's another story.

Here's a 12 noon chart for the date of birth of Francis Pakenham, 7th Earl of Longford, "Lord Longford". Confirmation of his exact place of birth eluded me, I've guessed London, it's unlikely to be far off mark - Britain is not vast in size like the USA. 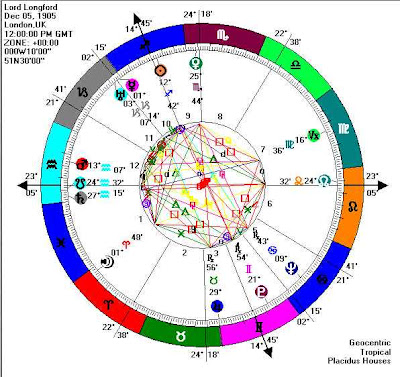 Lord Longford could almost be termed a "Saturn hybrid", but natal Sun lies in Sagittarius. Mercury and Uranus are in Capricorn, Mars and Saturn in Aquarius. Uranus, modern ruler of Aquarius in Capricorn, and Saturn ruler of Capricorn in Aquarius - is that mutual reception ? Well, kind of, but Saturn was also traditional ruler of Aquarius. I suspect this mixture added emphasis to Aquarian and Capricorn traits in his nature.

(I love this almost textbook description of Aquarius, from an obituary in The Independent)
"Lord Longford was the kind of figure who gives British eccentricity a good name. As a supporter of worthy and batty causes in equal measure, he was unashamed to invite ridicule and hostility in order to pursue his chosen goals of social reform.
Lord Longford had a merry disregard for what others would make of him – an essential quality in anyone who wishes to change things against the grain of opinion. In an age when so many politicians strive to project normality and consensus as the highest virtues, we will come to miss those who, whether we agree with them or not, defend their beliefs with vigour and defiance."

The mix of Sagittarius, Capricorn and Aquarius describes very well his connection with law, politics, religion (he was a devout Roman Catholic) and social reform. He was no saint, but he was certainly a good example of how the rigidity and structure of law can be, at the same time, respected and opposed. Lord Longford might have been a good example of a Saturn hybrid were it not for a thick Neptunian mist, proving how, in pursuit of the highest principles of Christianity, one can fall victim to delusion.

There's a Yod formation in his natal chart, linking a sextile between Sun in Sagittarius and Mars in Aquarius, via inconjunct aspects forming an arrow point at Neptune in Cancer, so chanelling the energy of the two sextiled planets and signs through the swirling mists of of Neptune in sensitive Cancer.

There is certainly a very Neptunian feel to his history. Without a time of birth it's impossible to know whether natal Moon lay in Aries or Pisces, or which sign was rising as he came into the world. I'd bet that Pisces (ruled by Neptune) figures in the picture somewhere.

(From BBC News)
"Soon after the outbreak of World War II he was invalided out of the army through illness. He suffered a nervous breakdown at the feeling of humiliation he felt and he said the experience left him with a deep compassion for the underdog.
He decided to contribute to the nation's future through government instead
He worked with Lord Beveridge, during the war, in his researches on social security - the ensuing Beveridge Report laid the foundations of the post-war welfare state."
I think this supports Moon in Pisces, rather than Aries, also more evidence that Capricorn/Sagittarius/Aquarius were well to the fore in his character: work for legislation leading to social reform.

The opposition, between Venus in sexy Scorpio and Jupiter in more staid Taurus, could be said to symbolise his campaign against pornography, which some commentators said was hypocritical.

Two quotes from an excellent article in The Guardian The first could link to his Venus/Jupiter opposition and, with regard to Myra Hindley, self delusion stemming from Neptune lying at the arrow point of that Yod.

"Though conducted simultaneously, the two crusades that made Frank Longford, who has died aged 95, a household name in Britain were an odd combination. The first, launched in the early 1970s, aimed to outlaw pornography and presented him as a prurient reactionary and a shameless hypocrite touring the sex clubs that he wanted to close down. The second, which continued for the last three decades of his life, attempted to win parole for the moors murderess, Myra Hindley. Here Longford was at his most liberal, Christian and naive, building on a lifetime of interest in prison reform, to argue that Hindley, and indeed all offenders, could be rehabilitated if society was prepared to forgive."

And the following could be said, perhaps, to support Moon being in Aries (regarding his mother):

"In Elizabeth Harman, whom he married in 1931, Longford found the emotional warmth and love denied him as a child by a difficult, and often cruel, mother. Made painfully aware of his insignificance in her eyes next to his elder brother, he only recovered a sense of self-esteem while at Oxford. At a summer ball, he was asleep on a couch when spotted by Elizabeth, one of the most beautiful and sought- after undergraduates of her generation."


Lord Longford died, age 95, in 2001. Amazingly, he continued prison-visiting up to the time of his death.

The small image is a portrait of Lord Longford and his wife from the National Portrait Gallery.
Posted by Twilight at Tuesday, January 15, 2008