Here's some dubious support for those astrologers who've gone out on a limb to predict that Hillary Clinton will be the USA's next president.

This prediction is based on a so-called Bible Code. The narrator also makes reference to astrology in part of the video.

For information on the bible code, see Wikipedia HERE, and for a skeptical version Skeptics Dictionary HERE.

On this particular subject, I'm skeptical. I suspect that it would be possible to find whatever one decided to look for. If I had the necessary software, and looked for long enough, I'm confident I'd find a few references to John Edwards and the White House, not to mention Barack Obama and all the other hopefuls. Neverthless, it's interesting to hear what the researcher/narrator has to say.

I had intended to embed the video here, but as it appears to start automatically, without prompting, it's wiser to provide a direct link to the presentation:

Also a link to what seems to be the text of the presentation.


An example of the code. (Words visible here include: Hillary, senate, white house, two thousand eight, house of she.) 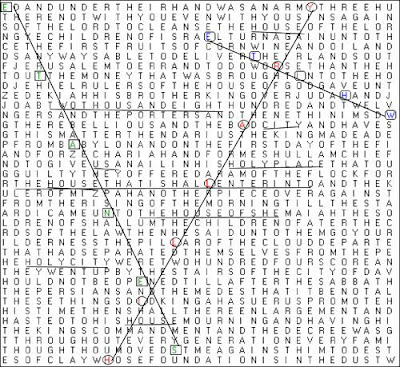 PS:
For a brief, down to earth assessment of the three leading candidates on the Democrat side (sans Bible Code, sans astrology), I recommend Hank Edson's recent article "The Survivor, The Meteor and The Champion".
Posted by Twilight at Friday, January 18, 2008