Today would have been the birthday of Murat (Chic) Young creator of the long-running cartoon strip "Blondie". The storylines and content of "Blondie", which first saw the light in 1930, are based on everyday matters experienced by all of us at one time or another. There's no fantasy, not even much whimsy, just gentle humour rooted in real life. 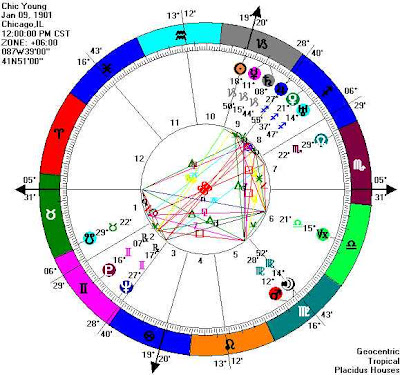 
Sun Mercury and Saturn all in Capricorn seem to appropriately describe Mr Young's creation which has amused and entertained readers for several generations. Capricorn's ruler, Saturn, represents age, passage of time, tradition etc. Capricorn also represents a good businessman, which Chic Young had to be, for his was one of the most successfully syndicated cartoon strips of all. Three other planets (Jupiter, Venus, Uranus) lie right nextdoor in Sagittarius, ruled by Jupiter, planet of publishing(among other things), fit his career history nicely. Jupiter is in exact opposition to Neptune, planet of imagination. This indicates creativity, which, without those three planets in down-to-earth Capricorn, might have led towards a completely different, much less solid and rewarding professional direction. 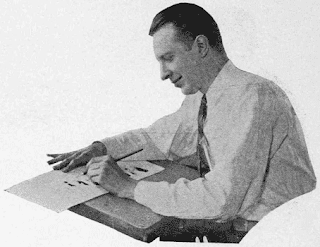 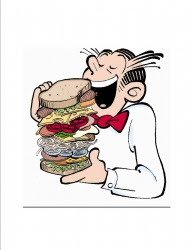 Blondie's husband Dagwood, in common with all husbands, has some irritating but endearing habits. He's seen(right) with his famously huge sandwich. Their eldest child "Baby Dumpling" came along, as if by magic, to further entrance readers, and as years passed the family grew and progressed as all families do. 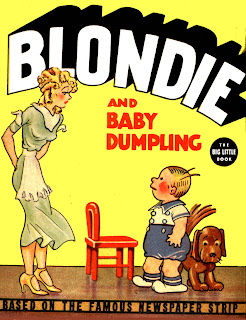 It was and is a long-running soap opera in print, though each mini-episode can stand alone.

When Chic Young died in 1973, his son, Dean Young took over and has brought the cartoon strip into the 21st century.
Posted by Twilight at Wednesday, January 09, 2008