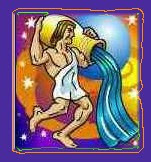 The Sun is now at the gates of the zodiac sign Aquarius. I've made a video pic-book (sorry - now removed) of well known folk who have the sign of the water bearer dominant in their natal charts. These people do not necessarily have Sun in Aquarius. They may have Aquarius rising, or Moon in Aquarius, or several planets bunched together in the sign.

There are one or two high scorers here due to the Aquarius pile-up in 1962. Michael Riley 83.19%, Jennifer Jason Leigh 77.66%, Garth Brooks, Clint Black and Axl Rose all have scores over 65%, the rest featured have between 62 and 39% Aquarius in their charts.

There are a lot of actors and actresses here, some musicians and singers, and the usual mixed bag. What I found a little odd though, is that, with a handful of exceptions, these people (or as much as we know of them) are not yer typical textbook Aquarius. I've thought for a long time that textbook writers have had Aquarius slightly wrong. What textbooks talk about is more akin to the people with Uranus dominant in their natal charts. Hmmmmmm. Food for thought.

It's interesting to consider Aquarius dominant individuals in comparison with those listed below who have Uranus (modern ruler of Aquarius) dominant. Isn't there a slightly different "feel" to Uranus dominant people? I think there is.

As always, data comes from Astrotheme

Astrotheme has a long list of people with Uranus dominant in their natal charts. Many names are unfamiliar to those of us in present-day USA, UK and other English speaking countries. I've picked out a small collection who are well-known to us, and who seem to best represent the flavour of Uranus.

"In Astrology, the energies of Uranus are electric and crammed with change. Uranus is forward-looking. It balks at tradition, and celebrates originality and individuality. Uranus is associated with technology, innovation, discovery, and all that is progressive. On the up side, Uranus is associated with enlightenment, progressiveness, objectivity, novelty, and ingenuity. Negative expression of Uranus is rebelliousness without a cause and irresponsibility.

When Uranus is not developed, it reacts; but when natives are truly in tune with its energies, Uranus is highly intuitive. It represents the spark of intuition that spurs invention. We can see Uranus as the intuition that sparks further studies or investigation."

(In addition, Uranus is thought by some to "rule" astrology.)

Individuals named below have between 25% and 20% Uranus in their natal charts, most do not have Sun in Aquarius.

Percy Seymour of whom it has been said "one of the boldest and most exciting scientific thinkers of our time. He is one of a small group of pioneers who have created a revolution...." (Capricorn Sun)

Newt Gingrich American politician...."In 1995, Time magazine selected him as the Person of the Year for his role in leading the Republican Revolution in the House, ending 40 years of Democratic Party majorities."(Gemini Sun)

Douglas Adams, British author of "The Hitchhiker's Guide to the Galaxy" trilogy of five, and other books. (Pisces Sun)

i have aquarius dominan and uranus dominant
but weird i dont have sun, moon or rising in aquarius maybe because another planet
from : http://www.astro.com

querty - Hi there! Thanks for reading and commenting on this old post from 2008.
This data came from Astrotheme. I did a post more recently, 15 October 2015, about the Walter Pullen method, detail at Astrodienst website. Take a look at my post, then maybe visit Astrodienst and see whether you get the same result from Walter Pullen's method.