We watched TV coverage of the Iowa caucuses on Thursday evening, I wanted to understand more about this peculiar tradition. It was interesting.

But what moved me, and really moved me (to tears), was John Edwards' speech after the results were announced. After hearing him speak, speeches of the other candidates seemed lacklustre, stilted and boring. He won me over. Kucinich wasn't even in the race, and Biden, my other favourite, has now bowed out. What is becoming annoying is that mainstream media is now practically ignoring Edwards - in the way they ignored Kucinich, Biden and the others before Iowa. I find this shocking - Edwards came second, he deserves equal coverage with Clinton and Obama! Bill Moyers on PBC yesterday evening, while analysing Iowa results with an expert, didn't mention Edwards once! John Edwards now seems to me to be America's best hope for real change, but if MSM have their way he'll sink without trace like the rest.

Other astrologers have interpreted Edwards chart in the past, so I'm not going to attempt that. I'd recommend the article about Edwards by Lynn Hayes in her blog about around a year ago.

On Thursday, before watching TV, I'd been working on a post about an artist from 19th century France, Henri Rousseau. When I looked at John Edwards' chart the next day, I remembered Rousseau's. They both have a mixture of Gemini and Cancer in their makeup. Edwards has Uranus close to the ascendant, Rousseau had Neptune. (Click on charts to enlarge. Edwards' is on the left)

I have been wondering whether that combination of Gemini and Cancer is one which has a distinct ability to reach out to people, via a chosen channel or medium. The Moon (ruler of Cancer) is said to represent "the public", Gemini, ruled by Mercury, is the sign of communication of all kinds. Edwards certainly reached out to me on Thursday evening.

So... on to artist Henri Rousseau, born 21 May 1844 in Laval, France. According to Astrotheme he was born at 1am. If this is near accurate it puts Neptune very close to his ascendant. There could hardly be a better placement in the natal chart of this French artist.

His nickname was "Le douanier", the customs officer. He was actually a toll collector at one of Paris's gates, but like everything else about him and his art, a touch of imagination and romaticism edges in. 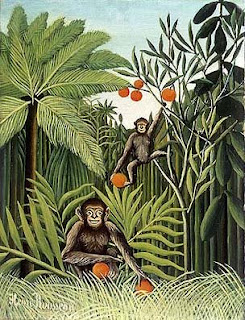 Many of his best known paintings depict exotic jungle scenes. He spread the word that his inspiration came from travels in Mexico, but in truth he had never left France. His inspiration came from museums, botanic gardens and the like. None of this detracts at all from his unique painting style, which comes under the label "naive" or "primitive" - meaning an artist without formal training. Grandma Moses and Beryl Cook are two others from this genre about whom I've written. Although their paintings often lack proportion, perspective and depth, there is something special about them - they seem to live. Could the secret of this be that the artists were so filled with enthusiasm for their subjects, that they acquired a magical ability to convey it to others?

Henri Rousseau's natal Sun, Mercury and Mars all lay in Gemini. Venus and Moon in Cancer. Saturn in the sign of its traditional rulership, Aquarius, along with Neptune which lay in a strong position, just 4 degrees from the Aquarius ascendant (if birth time is correct). Jupiter is in the sign of its traditional ruler, Pisces. A bowl shaped configuration with all planets in one half of the chart, signifies a person with specific and determined focus. 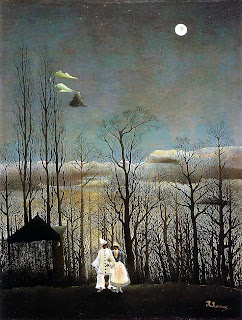 As I understand it these placements do not actually make the planets' energy stronger, but more pure and true to their inherent nature - unadulterated by other factors. Strength, I believe, comes from a planet being on or close to one of the angles, and here we have Neptune, planet of imagination and dreams on the ascendant -possibly the strongest angle in the chart, personality-wise.

Some of Rousseau's paitings are realistic, but the majority of his best work relies heavily on imagination and inventive ideas.

In spite of some ridicule by contemporaries about his work, Rousseau didn't ever lose faith in himself or his ability as an artist. Nor did he ever try to copy the more sophisticated styles practiced by his peers. He remained supremely confident in his own unique style. Was he deluding (Neptune) himself, or were his bloody-minded Aquarian traits overcoming Gemini mutability? Perhaps this kind of confidence could be one result of having several planets in the signs of their rulerships.

Rousseau died in poverty, but like so many of his fellow-artists, the future brought acclaim. Young artists took inspiration from the work which had been derided during his lifetime. The outstanding factor in Rousseau's chart has to be dreamy imaginative Neptune on the ascendant. One of Rousseau's best known paintings is actually called "The Dream", see below. 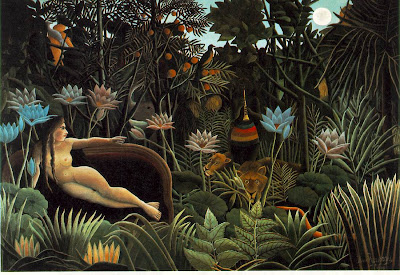 .
More of this artist's work can be explored via Google Image
Posted by Twilight at Saturday, January 05, 2008