Yesterday's post, concerning the sidereal and tropical zodiacs, calls for a little experimentation. The natal chart of one who could well be the next president of the USA, Hillary Clinton, may be a good subject. It's unfortunate that there's a question mark over her time of birth: 8am, 8 pm or neither? I'll use 8am for this purpose, keeping in mind that it's not necessarily correct. 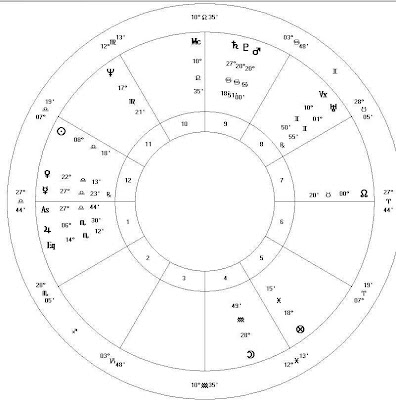 For the tropical version of Ms Clinton's chart,see AstroFutureTrends HERE

Did I ever see Hillary Clinton as a (tropical) quadruple Scorpio? I didn't - not really. Sidereally Ms Clinton would have three planets and ascendant in Libra instead of Scorpio, and Jupiter in Scorpio rather than Sagittarius. Her Saturn, Pluto and Mars in tropical Leo would be in Cancer sidereally. Tropical Pisces Moon becomes Aquarius Moon sidereally.

I like that sidereal Aquarius Moon for her, better than tropical Pisces - but the softness of a Pisces Moon is transferred to the stellium in Cancer - Saturn, Pluto and Mars - three planets with hard reputations. Were this a male's natal chart I'd say the tropical Leo positions fit better. As it is the chart of a female, albeit a female in the spotlight of the public stage, I think the planets in Cancer, softened slightly, may be appropriate. Hillary Clinton can hold her own with the most determined male politician, but her experience as a mother and a daughter has to provide a very different base from that of her male colleagues. I understand that in her past career she has often championed children, and the underprivileged. She fought to improve the health care system in the USA some years ago, long before many politicians saw it as being an important issue. There has to be a deep-seated compassion there, well-hidden by a tough exterior.

Sidereal Libra Sun, ascendant, Mercury and Venus replace the passionate, sexy tropical Scorpio planets. Jupiter in sidereal Scorpio retains passion and determination, but Libra the diplomat takes center stage. Some say that Libra can be a flip-flop, indecisive sign. Hillary Clinton appears to be very decisive, and one who can think on her feet when under attack, but she always remains cool and diplomatic. Aquarius Moon trines Mercury/Venus in Libra, indicating an easy, sharp intelligence, and quick-thinking mind. Whilst not the epitome of charm, as in textbook Libra , she does seem to be well-liked by many politicians who know her personally - politicians of both stripes.

As mere onlookers at her performance on the public stage, we cannot hope to know what kind of a woman she really is - I suspect that predominantly Libra may be a closer match than predominantly Scorpio. Would a quadruple Scorpio have stayed with her husband after being publicly humiliated? Not in my book. Do I rest my case? No, but this is food for thought.

It is probably difficult to confirm anything when comparing charts to politicians. Politicians seldom show a true face. For some of them, it takes years for their true "character" to be revealed.

I agree - and mostly we don't ever see their "private" side at all.

I suppose we all show a different side of ourselves in our working lives, but in the case of politicians I think the difference between private and professional "faces" must be much greater than for the likes of you and me.