During the past few weeks I've been struggling, with assistance of our doctor, to get my high blood pressure back in check. It started to spike for no particular reason towards the end of April. New medication has taken its time to become effective, so the intermediate weeks became a wee bit stressful. Things eventually took a turn for the better. I'm hoping that the additional meds have begun to kick-in - the process takes time, it seems.

It's a little spooky to me (though likely not to any proper astrologer) that these problems were happening as transiting Uranus (ruler of my Aquarius Sun) has been conjunct my natal Moon at around 24/25 Aries for a while, and was joined for a spell by transiting Mercury. That "double-dose" might have been the astro-culprit. Mercury has been moving away for a while now, as things have improved. Coincidence? Maybe - maybe not. Uranus will hang around natal Moon for some time yet, including a retrograde phase, prolonging potential for change.

Evidence of equilibrium returning, in the circulation of blood department, inspired a re-hash of a brief piece from a few years ago:- 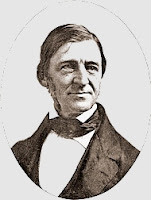 Something to ponder upon from Ralph Waldo Emerson, poet, essayist, and founder of the Trancendentalist movement in the USA.

He was born on 25 May 1803 at 3:15PM in Boston, Ma. His natal chart is available at Astrodatabank HERE. It's a nicely balanced natal chart element, mode and polarity-wise; it's appropriate that he sensed the equilibrium in nature, as expressed in the following extract.

From CONDUCT OF LIFE by Ralph Waldo Emerson, a collection of lectures first delivered between 1851 and 1852 reiterating Emerson's beliefs about fate, power, wealth, and worship, among other topics.


Beautiful as is the symmetry of any form, if the form can move we seek a more excellent symmetry. The interruption of equilibrium stimulates the eye to desire the restoration of symmetry, and to watch the steps through which it is attained. This is the charm of running water, sea waves, the flight of birds and the locomotion of animals. This is the theory of dancing, to recover continually in changes the lost equilibrium, not by abrupt and angular but by gradual and curving movements....This fact suggests the reason of all mistakes and offence in our own modes. It is necessary in music, when you strike a discord, to let down the ear by an intermediate note or two to the accord again: and many a good experiment, born of good sense and destined to succeed, fails only because it is offensively sudden....To this streaming or flowing belongs the beauty that all circular movement has; as the circulation of waters, the circulation of the blood, the periodical motion of planets, the annual wave of vegetation, the action and reaction of nature; and if we follow it out, this demand in our thought for an ever onward action is the argument for the immortality.

I apologize for the length. A picture is worth a thousand words indeed.

I suggest the change in your blood pressure is likely connected to the square of transiting Pluto to your progressed Saturn. This relationship will continue through the year; it's widest separation reaching 2 1/2 degrees (still potent) on September 29th.

I make my measurements in right ascension (the true position of bodies in space). I also use charts not familiar to most Western Tropical astrologers and apply a discovery of my own which has proved out nearly 100% of the time in over 40 years of use in thousands of charts nailing many right to the clock minute in timing accuracy. The charts are read according to what point(s) is/are within 2 degrees of or are being swept by the chart's progressing angles. I am not progressing any of the following charts but that Saturn square Pluto will come to the chart angles when the MC at 110° holds Pluto on the IC squared by secondary progressed natal Saturn on the West Point at 20° (110° - 90° = 20°).

The next chart began May 2nd with transit Saturn within 1/2 degree of being exactly on the MC (MC 267°28, transit Saturn 267°02') and the aspect between transit Pluto and secondary progressed natal Saturn still the same.

That square between your chart's progressed Saturn and transit Pluto will stay strong through the end of the year and may play a part in less than satisfactory results in your medicinal efforts. Of course you will be monitoring things closely.

Bob ~ Thanks for your input. I do not pretend to understand your complex system though.
Results are satisfactory to date, after a few iffy weeks of "settling in" time for the meds. which the doc did warn about. I do monitor BP daily, and shall continue to do so.

I'm not denying your system could have validity, but my own feeling is that, if any astrology is involved here at all (and maybe there is none) it'd be Uranus transit to natal Moon - Uranus being ruler of my natal Sun. That feels right to me, whereas progressions etc have never "felt" right to me, and I don't ever use them. However I'll keep your words in mind.