Earlier this week, while killing time waiting for the pharmacy to prepare some meds for yours truly's seemingly irrepressible blood pressure, we wandered into our local video store, came away with 3 rented DVD's: the much acclaimed and awarded La La Land, Doubt, and Fathers and Daughters. We've watched these during the week, may as well give marks out of 10 and scribble a wee bit about each. 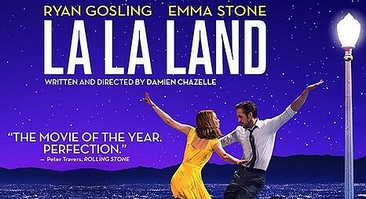 We were in for a treat - or so I thought.

Verdict: disappointing - very! Husband, a lifelong avid jazz fan felt like throwing in the towel around half way through the movie's 2 hours and 8 minutes. Clueless dialogue about the history of jazz was his irritation, along with what we both felt early on: this is shallow fluff; if it was meant to be an homage to the musicals of yesteryear - it ain't happenin'.

Dancing was pretty basic, singing was in tune, but hollow and uninspired. Songs were particularly unmemorable in both melody and lyrics. Time was, on leaving a movie musical I'd walk out of the cinema with its songs running through my head, and continuing to do so for days - I can hear some of them still! La La Land's songs? Zilch, even after half an hour, or 5 minutes.

Acting was adequate, at best. Emma Stone began well in the early scenes but faded later on, Ryan Gosling, in my view, was uncharismatic. A male lead with more charisma might have just managed to save this movie for me.

That was a whole lot of negative - sorry!

If this movie had any hidden message, it was, I suspect: "You can never have it all."

I expected too much and was disappointed. A comment, found below an online review of the film, hit the nail on the head: "it was akin to a small town's amateur production, or perhaps, a presentation by a high school's drama class". Harsh, but true. Amateurs could not, of course, have provided the lavish sets, but the rest would hardly be out of reach for them.
4/10 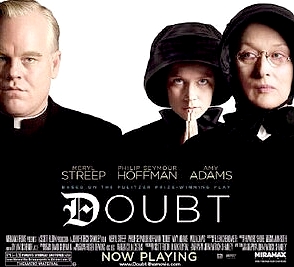 Doubt
I had absolutely no idea of was the theme of this one - picked it off the shelf due to its cast: the wonderful and still sadly lamented Philip Seymour Hoffman, the much acclaimed Meryl Streep, and lovely Violet Davis and Amy Adams.

Turns out the movie, from 2008, has its background in a Roman Catholic school and church in The Bronx, New York. Hoffman plays the church's priest, Streep, in "nasty" mode, the ultra-strict Sister and principal of the parish school. Amy Adams is a young nun, teacher in the school, and Violet Davis the mother of the school's only black student.

To outline the film's storyline would mean using spoiler after spoiler, so I shall desist. It's not too difficult to guess what veins are running through it though! 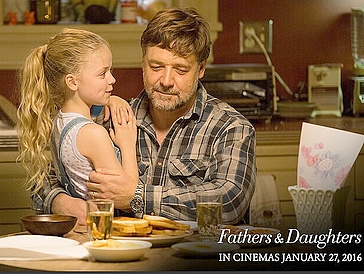 Fathers and Daughters
I had no clue about this one, chosen again for its cast - Russell Crowe, Amanda Seyfried and Aaron Paul (late of "Breaking Bad").

A 2016 release, story of how life changed dramatically for an award winning novelist after a road accident left him widowed, and with a daughter, 7 or 8 years old. Father and daughter become extremely close, but the father suffers mental breakdown after the accident and loss of his wife.
The story proceeds, over some 30 years, through a series of flash-backs and flash-forwards; these occasionally confused us.

Fathers and Daughters isn't a feel-good movie, it's not bad, certainly not badly acted, but remains somehow lacking.
6/10

I didn't bother with Lala land as most friends hated it. Enormous let down was the chant.

Doubt I liked but would highly recommend Calvary with the marvellous Brendan Gleeson.

I haven't seen F&D. Hadn't heard about it.

Some duds some winners always.

Wisewebwoman ~ Yes, let-down it was! Thanks for the recommend - I shall look for a chance to see "Calvary".