There'll be another one along in a minute (a remake, that is). 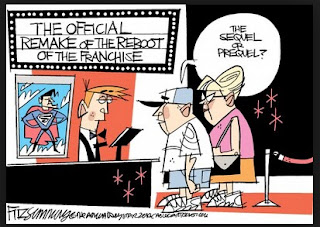 As I've opined before, "a blindfolded person could go into any library, pick out four books at random and find four pretty good new plots for movies. Why are we so regularly subjected to remakes, sometimes even more than one remake?"

There is a reasonable argument to be made that many movie or TV remakes focus on true classics of fiction, stories which would be more easily accepted by new generations of viewers if produced using all benefits of modern technology, modern production values and modern sensibilities. Although....overlaying an original time-line's sensibilities, which must have played deeply into the stories is likely to skew results in ways never envisioned by the stories' authors, decades or centuries ago.

Each year brings another crop of remakes - or at least brings a new crop to the notice of this blogger. We've recently watched a mini-series remake of Anne of Green Gables, re-titled Anne with an E. The famous children's novels from 1908, by Canadian author Lucy Maud Montgomery are source material. Never having read the original set of books, and never having seen any earlier film or TV versions, the stories were new to me. When something like this happens, I feel less annoyed about remakes, but only for a short time. When I recall that someone, not too long ago, had the nerve to re-make Ben Hur (again), my ultra critical mode returns.

I've read that a remake of the movie "Beaches" is in the works, "for a new generation". Sigh. My comment to husband - "If they dare to omit Wind Beneath My Wings the film will flop - and will richly deserve to do so! Also in the wings, or already airing somewhere on TV or streaming, are remakes of Dirty Dancing and The Handmaid's Tale.

Here on Earth, all things are cyclic. I ought not to be surprised, or annoyed about remakes. They will be as inevitable a part of life on Earth as the turning of the clock or the seasons, or the Moon's waxing and waning. Hollywood moguls probably don't realise exactly why, of course, all they care about are the $$$$$$$$.

Planetary cycles often bring with them a remake of our own life stories, especially in the case of Saturn, Uranus and Pluto cycles. Our own lifestyles can be remade, our life stories re-written with different cast, different setting, variations in plot, but with us in the starring role. I can attest to this, personally!
Posted by Twilight at Saturday, May 27, 2017

I agree. There seems to be a dearth of good original creative material in Hollywood's Inbox. Though I've read some marvellous fiction in the last few years which would be easily translatable to film.

Netflix are doing amazing work among the usual puerile drivel though.

Wisewebwoman ~ Agreed - Netflix original films are proving to be very worthwhile watches - and their output is likely to get even better, as they gain more experience of what their clients like best.