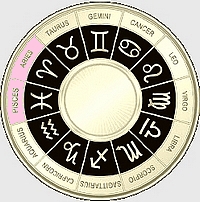 In the circle of the zodiac, around which our planets and lights travel, the first and last signs are opposites in characteristics, they are also neighbours. Aries, the initiator, full of energy, impatient to get things started; cheek-by-jowl is Pisces, the loose, visionary dreamer in no hurry to, as they say in the USA, "haul ass".

Circles don't have extremities, only departure and return points, which means that opposites - the extremes - are liable to bump into one another, even co-mingle, in effect.

Many people will have both Aries and Pisces emphasised in their nature, this will happen not all that infrequently, as Mercury and Venus are never far from the Sun, wherever it may be in the zodiac circle. If such people can learn to live with this kind of push-pull contrast, encourage balance, interesting and often helpful blends will be forthcoming. Such helpful blending and balancing seldom seems to happen in politics, however.

In the circle of political opinion, the further left, or right, one moves in entrenched viewpoints, the more liable one is, without even realising it, to be in danger of assisting the very causes one started out to oppose, thereby damaging one's own best interests.

The most extreme left-wing views can do more harm than good to more moderate opinions, even at times inadvertently assisting the aims of the right. Farthest right extreme opinions could end up helping perceived enemies on the left. Extreme words, and actions, leave nothing but ridicule in their wake eventually serving only to assist the left.

“Extremes, though contrary, have the like effects. Extreme heat kills, and so extreme cold: extreme love breeds satiety, and so extreme hatred; and too violent rigor tempts chastity, as does too much license.”
George Chapman, English poet and dramatist c.1559-1634.

anthonynorth said...One of my political 'laws' is that extremism always results in the opposite outcome. I think you've got this about right. And it's the same with a straight line. No such thing. Draw a line anywhere on this planet and if you keep going long enough, you'll end up back where you started.

Twilight said...AN ~~~ Oh good! I'm glad you agree because after I'd drafted this post I did wonder if others would see it as I do. Then I thought - oh, what the heck, if I see it that way, that's good enough - my blog my thoughts. ;-)