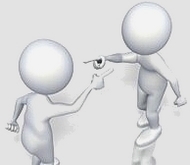 I'm not sure whether it's because I no longer search for any of those tedious arguments on the validity or otherwise of astrology, or that skeptics have ceased their whingeing about the ancient art. The question has had all life wrung out of it anyway. I came across the following post in my 2009 archives the other day, decided to give it a re-airing as a reminder that it was then, is now, and always will be a lost cause, for either side of the argument, for or against astrology. It reminds me, a bit, of the to and fro arguments between Democrats and Republicans, or Sanders fans vs Clinton fans, competing sports teams, and so on. It'd be interesting to know whether there's much, or any known evidence of change of heart in these arguments, especially in the one regarding astrology. I've never been all-in for everything the astrology text books, and highly respected astrologers through the ages have told us, but I am convinced, from my own life patterns, that there's "something going on".


I'd decided not to post today, then I stumbled upon this:

"What is the best way of tackling astrology", on the Richard Wiseman blog, I where I arrived by accident.

Why on earth should anyone have to "tackle" astrology? Astronomers and science-oriented skeptics have such arrogance!

A very brief extract from a BBC Radio 5 interview has been embedded on the blog. This doesn't give a very good impression of the astrologer's viewpoint, however. Wiseman keeps badgering her to say which astrological study she relies on to uphold her views. I reckon she should have responded that there has yet been no proper all-encompassing study of the subject in a way that computer technology would now afford. It's a pity that those who are so keen to deride astrology don't put their energy into conducting a wide study of the subject, in cooperation with those who understand it fully and using all available technology.

I haven't heard the whole interview, but the comments on this blog attracted, then repelled me.

The blogger, of course, is singing to a choir of lemming-like commenters. There is one comment from a Richard King (5.27pm on 28 May 2009)which warmed my rapidly freezing heart.


I was not wildly impressed with either side in the interview. Anything other than a dialogue with at least a degree of understanding and mutual respect for alternative views and ways seems rather pointless.
What is the best way of tackling astrology? That depends what is meant by tackling. If it is understanding and investigating, including “scientifically”, then discuss it with people who understand the subject. Similarly, any astrologers who wish to engage with science should discuss the matter with people who understand science.
The problem is that there are, obviously(?), huge differences in levels of understanding and capability on both sides

And from his closing paragraphs, a view which is very close to my own:


On the basis of my knowledge and experience, there is less to astrology than some proponents claim and more than mainstream science claims; though the general tenet of it fits with some rather high level science.