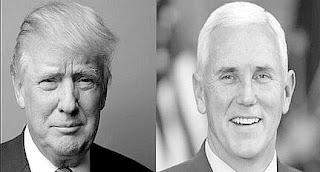 It didn't take a political science degree to realise that Donald J. Trump would be unfit for the presidency of the USA. It doesn't take decades of experience of US politics to realise that the guy is not up to the job he was elected, by enough people in enough relevant states, to carry out. He was elected. It matters little that his opponent, she who shall be nameless, did beat him via popular vote. In this country the popular vote counts for hardly anything, that's the way things have been for centuries. If the arrangement doesn't suit the people, then the people should have been making their feelings felt long, long ago.

Our current president is everything a president ought not to be : incompetent, largely inarticulate, inexperienced in the ways of legislation and ignorant of how the country is run, self-absorbed to the nth degree, and has to rely 99% of the time on the people he has chosen to advise him - not an admirable crew - they're Republicans, what else would we have expected?

The previous administration, Democrats, under President Obama, did not do nearly enough for the people who had enthusiastically voted in the President on two occasions. So many of them remained in desperate need of help that they felt they'd rather vote in an inexperienced and clearly unsuitable Donald Trump than risk 4 or 8 more years of the same disappointing stuff experienced during the past 8 years. Democrats no longer represent the working class - in fact the working class has nobody to represent them. Senator Bernie Sanders was probably their last forlorn hope. Bernie was effectively put down by the Democratic National Committee, who it appears would rather have seen a President Trump than a President Sanders, and who were blind to the inadequacies of their own chosen candidate.

I am sick and tired of reading headlines at HuffPost, and elsewhere, day after day after day, bemoaning, sneering, exaggerating this President's actions from the previous day. I never get past headlines, my blood pressure wouldn't stand it! I haven't watched any TV news for years, and our TV has forgotten that MSNBC even exists. Late night shows, and their presenters began to repulse me early on in this new political era. Even the best of them have become like one-note schoolyard bullies. Most internet websites, once reasonable and readable, have become one-note hysterical in their views.

It is not funny anymore.

So...what would headlines, pundits and late night presenters be saying if and when President Trump meets the fate they so obviously intend for him : impeachment, removal from office by fair means or foul, or by his resignation? We should not overlook the fact that negation of a presidential election would be very serious step, undermining much more than just the person who is considered incompetent in the job for which he was elected. Would those journalists and pundits welcome a President Pence with open arms? He would certainly not provide them with the same amount of juicy material they've enjoyed since the early days of 2016. VP Mike Pence is not a figure of fun, he looks, sounds, and acts presidential, but he's also scary in ways Donald Trump, bad as he is, will never be.

Pete Dolack's piece at Counterpunch (and on his own blog) at the weekend tells it like it is.
Why Pence Might be Even Worse Than Trump


The complicating factor here is that an impeachment and removal from office would elevate Christian fundamentalist Mike Pence to the presidency. That would be truly a horrifying development. Not only because Vice President Pence is more of a “true believer” in the extreme Right agenda than is President Trump but as an experienced legislator and governor, he’d likely be far more effective in steering bills through Congress..................

The church he attended in Indianapolis openly calls for a theocratic state, believing the Bible should be taken literally: “We believe the Bible to be the verbally inspired Word of God, inerrant in the original manuscripts and the sufficient and final authority for all matters of faith, practice, and life.”

And this church asserts that not only should women be “deferential” to men and be “guided” toward marriage and away from a career, but that this applies to all women, whether or not church members. The Daily Kos article notes that a foundational book used by the church “does not distinguish between conduct expected from women in voluntary marriages and unrelated women who may be members of another faith. This book teaches that preferences of women from different faiths (or no faith) are simply wrong and need to be corrected by the older women.”

And thus it is no surprise Vice President Pence would so distinguish himself for his crusades against women. As a member of Congress, he led fights to defund Planned Parenthood.

To what extent the policies of the Trump administration are those of Mike Pence and what policies are those of White supremacist chief strategist Steve Bannon are difficult to know. Perhaps they have separate spheres of influence or, as is likely, there is considerable overlap in their agendas. The draconian budget proposed by the Trump administration on May 23 has the fingerprints of the budget director, Mick Mulvaney, a far right ideologue himself, but it is likely the vice president had much say in it — the punishments intended to be administered to people for the crime of being poor are certainly consistent with his style.

Given that Donald Trump doesn’t have the intellectual capacity or attention span to actually be president, and appears to rely heavily on a small coterie, Mike Pence likely is already directing much policy. There is nothing to choose between the two. We don’t have to declare them fascists to find them plenty scary enough. (You are, after all, reading this on your computer screen at your leisure rather than having this conversation in a concentration camp. And by this point, Hitler had already consolidated his dictatorship with political opponents and union officials murdered or in camps.)

We have all the reasons we could want to oppose the Trump administration at every step. An administration, not one personality. There is no reason to think ousting President Trump would lessen the danger to the world he presents, and could actually have the counter-intuitive effect of increasing it. (My highlight)

These are dark times indeed. Pence is from the Middle Ages but less enlightened.

The Electoral College system needs to be trashed.

Wisewebwoman ~ There are no good options - not even any mediocre ones.