MAY (not the Theresa variety) + Ancient Rome

A nod to Music Monday first, according to the lyrics I'm several days late....

May is now fully upon us.

I've not scribbled about ancient Roman Festivals for a while so, a look at what used to be going on, way back when in Ancient Rome, during the month of May. 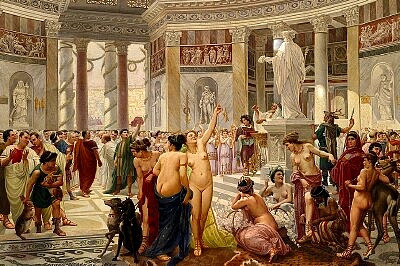 The last days of April and first three days of May saw Ludi Floriales, honouring Flora, goddess of flowers, fertility, sex, the blossom of spring and the renewal of the cycle of life.

"Ludi" = Games by the way, and these springtime Games, dating from 173 BC, primarily celebrated fertility. From ancient writings, it appears Ludi Floriales were on the wanton, spicy side, including strip-tease performances by prostitutes. An abundance of flowers would have been displayed around the city, and in garlands bedecking its citizens. On the final day of the Games chariot races were held. It's thought that the Maypole, as a phallic symbol, is probably a descendant of these Roman Games.


Ancient Rome had barely caught its breath after those licentious goings on when another festival kicked in:Lemuria, on May 9, 11 and 13. To appease the ghosts of the dead, who were believed to be walking the city on these dates, Romans would walk barefoot and throw black beans over their shoulders, during darkness. Each head of household was required to do this nine times at midnight, while his household members clashed metal pots to persuade ancestral ghosts to leave.

Ancient Roman writer, Ovid believed that the source of these practices was guilt, due to the murder of Remus, brother of Romulus, founder of Rome. (Remuria/Lemuria) See Wikipedia here. 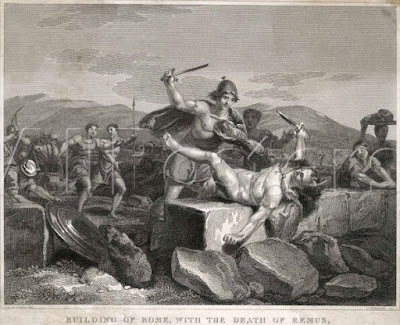 Around a week after Lemuria came Agonalia, on May 21. This festival honored a little known god, Vediovis. The object of it is thought to have related to protection and/or war. A ram would be sacrificed by an important religious official.

Two days later, May 23, saw Tubilustrium, honouring Vulcan. The god Vulcan was responsible for manufacture of sacred war trumpets or tubas(the lituus). Sacrifice of a female lamb marked this festival, and Salii (see Wikipedia) twelve youths known as the leaping priests of Mars, danced through the streets.

That was it for May. Citizens were involved in festivals during the first half of the month, they no doubt needed a rest after the naughtiness of the month's first few days, followed by some ghost-busting activities! Festivals later in the month were the responsibility of city officials and dignitaries.
Posted by Twilight at Monday, May 08, 2017