Still life artist Janet Fish has a birthday coming up this week. She was born in Boston, Massachusetts on 18 May 1938. Her close family had arty connection - father taught art history, her mother and uncle were both sculptors, and, though she never knew her grandfather, American Impressionist Clark Vorhees, she found his paintings to be profoundly inspirational.

After Smith college and a summer at Skowhegan School of Art, Ms Fish went on to Yale, studied Abstract Expressionism, but rejected it in favour of her own signature style of still life, specialising in portrayal of a blending of reflection, light, and everyday objects.

“I’m not looking for luminosity per se but for a subject that provides an opportunity for overall activity, such as light falling through leaves,” she says. “But light isn’t the only source of this activity. I can find it, for instance, in the texture of grass or the pattern of cloth.”

Many in the art world consider Janet Fish to be the greatest living still-life painter.

It's unlikely that an image of her work, translated by the internet and Blogger, will do it justice, but I'll add just a few examples here. 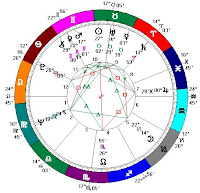 Ms Fish is still with us, so I'll not intrude on her privacy by trying to interpret her natal chart. I'll simply point out that her Earthy Taurus Sun, with Uranus and Mercury also in Taurus; Moon in Earthy Capricorn (though exact degree uncertain without a time of birth), and Neptune (creativity) in Virgo the other Earth sign reflects her gravitation to painting real, earthy subjects in a creative manner; while natal Venus (planet of the arts) in mentally acuitive airy Gemini leads to a more intellectual approach than producing simple photo-realism, finding emphasis and importance on how objects react to light.