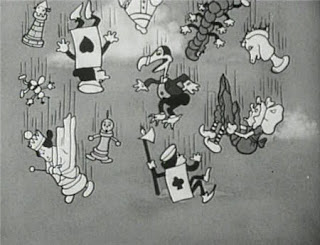 It's been a funny old week in the USA. Funny peculiar, not funny ha-ha!

Rush Limbaugh likening President Obama to Hitler, then saying “It is liberalism that’s the closest you can get to naziism and to socialism.”
Makes me certain that we have truly fallen down the rabbit hole with Alice!

Alice:
It would be so nice if something made sense for a change.

The White House Press Secretary, Robert Gibb responded yesterday, "I think anytime you make references to what happened in Germany in the 30's and 40's, I think you are talking about an event that has no equivalent. And I think anytime anyone ventures to compare anything to that, they are on thin ice, and it is best not employed."

Lou Dobbs insisting that the President show his birth certificate to prove his entitlement to be Prez.

The Hatter:
Twinkle, twinkle, little bat! How I wonder what you're at.

Various conservatives and right-wing groups at town hall meetings during the week trying to scupper the administration's plans to reform healthcare in the United States. Many carried signs bearing nazi imagery. A much needed reform is under attack by what we used to call in the UK the "I'm alright Jack" brigade. They have health insurance - damn anybody who is unfortunate enough to be without.

The Duchess:
There's a large mustard-mine near here. And the moral of that is -- The more there is of mine, the less there is of yours.

48-year old George Sodini shot and killed three women and wounded nine others at a Pittsburgh-area health club, before killing himself. Too many guns in a country where there are too many unbalanced people.

Former US President Bill Clinton travelled to North Korea and persuaded Kim Jong Il to pardon and free two American journalists, and on his return, after a brief acknowledgement of his success, comedians just couldn't resist the snide and unfunny quips relating to his past errors of judgement.

Alice: But I don't want to go among mad people.
The Cat: Oh, you can't help that. We're all mad here. I'm mad. You're mad.
Alice: How do you know I'm mad?
The Cat: You must be. Or you wouldn't have come here.

Film maker John Hughes, best known for his 1980s comedies ( eg: The Breakfast Club, Weird Science, Home Alone, Sixteen Candles, and Ferris Bueller's Day Off.) suffered a fatal heart this week, attack while taking a morning walk in New York. At age 59 - another one gone too soon. An Aquarian Sun person, too, he died close to an eclipse in his Sun sign. His health problem must have been present for some time though, and perhaps the eclipse provided "the tipping point".

Speaking of Sun Aquarians - but on a lighter note - rising music star, Adam Lambert has designed a silver pendant for sale at Pennyroyal on behalf of the charity MusiCares - he drew it himself, a copy of a tattoo he bears on his wrist depicting Egyptian symbol, The Eye of Horus. He has said that he had it put there when he succeeded in surviving auditions as far as the final 36 contestants of American Idol Season 8. He was eventually runner-up of the season. 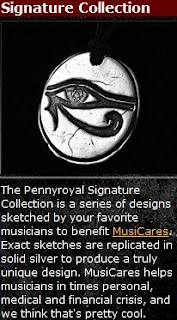 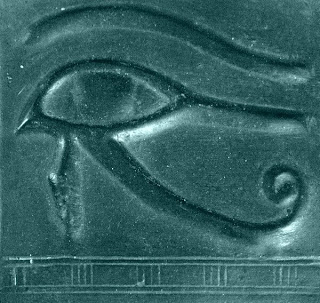 Coincidentally, around 6 years ago, on a trip to the USA to meet my now husband, we visited a museum in Fort Worth, where I bought, in the gift shop, a decorative piece to which I felt drawn: a thick, dark green tile-like ornament bearing The Eye of Horus design (right). I took it home to Yorkshire, displayed it on my dresser, and later made sure it was one of the things I retained to bring over when I emigrated from the UK (immigrated to the US, after marrying Himself). It currently has its home in our bedroom.

I wonder whether the Sun/Moon combination I share with Adam translates to an attraction to this particular symbol?

Wikipedia has some interesting information on The Eye of Horus, by the way. Who'd have thought that this symbol has anything at all to do with arithmentic, for instance?

Adam also has a custom made pendant from the same firm, Pennyroyal, showing astrological glyphs for his Sun/Moon/Rising sign, as below.

Wow. Rush Limbaugh is a moron. He really is. So is Glenn Beck. Everything is a ridiculously unfounded comparison to the Holocaust with him.

I wrote about the Sodini shooting a little in my blog. It totally shook me up. And John Hughes dying didn't help anything either.

those were compelling comparisons from current events to alice in wonderland, twilight. seems that i recently saw a promo for a new alice movie coming soon. i wonder who we should cast rush limbaugh as. should he portray the mad hatter or someone else?

Lucy ~ Hi there. I've left you a comment at your blog on the Sodini topic.

Agreed on Limabugh and Beck - they are showmen, of course, fishing for ratings, but doing untold damage in the process. and they just do not care!

Shawn ~~~ Yes, it's a Tim Burton movie I think, with Johnny Depp as the Mad Hatter, Alan Rickman as the Caterpillar. To be honest, I think it's too good for the likes of Limbaugh.

JABBERWOCKY is a better fit for him:
'Twas brillig, and the slithy toves

Did gyre and gimble in the wabe;
All mimsy were the borogoves,
And the mome raths outgrabe.

"Beware the Jabberwock, my son!
The jaws that bite, the claws that catch!
Beware the Jubjub bird, and shun
The frumious Bandersnatch!"

"Alice: How do you know I'm mad?
The Cat: You must be. Or you wouldn't have come here."

All too often I feel just like Alice. I'm sure you do, too. Everyone outside America knows its people are somewhat eccentric, but I doubt most realize that a large percentage of the US populace are totally deranged, bitter, and nurse a hatred of their own countrymen.

This nation is so reminiscent of ancient Rome in its death throes.

Loved the way you interweaved this with Alice :-)
I guess if it wasn't a mad world we'd be very bored.

RJ Adams ~~ I think you're being a wee bit harsh there RJ!

Eccentricity used to be thought to be a characteristic of the English, didn't it? Perhaps we exported it along with thousands of settlers from the old country. :-)

I agree that there is an element of derangement here, but a smaller proportion, as against the "regular" folk. It's just that the deranged get all the publicity.

Ancient Rome did leave its mark on the world, and not all of it was bad - same for the US I guess.
I don't know whether Rome struggled with this ever-present dichotomy we have here though. I'm not well-enough read on the subject.
:-)

Well, at least the madness gives us something to blog about - I wish it could be a rather more benign madness though.

I think I will try drawing a silver pendant on my wrist if it gets me as much success as Adam Lambert!