I took one of those Googly trips through cyberspace the other day, where one thing leads to another and the end result is far from what was one's first intention. It turns out that "Life on Mars" can teach us something astrological - in a roundabout way.

What started me on my wandering was one of my husband's photographs from last weekend's concert, brought back to mind when he added it to his blog one day this week: Adam Lambert standing in front of a giant red Mars backdrop - the scene for his Bowie medley which starts with "Life on Mars". Great backdrop - very impressive. Loved it, and the medley. (Photograph below is a sharper version of the one Himself managed to shoot from where we were seated.) 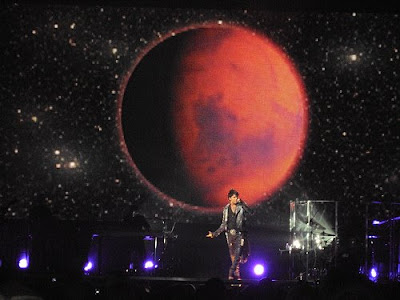 I wasn't familiar with the lyrics of "Life on Mars". I looked 'em up on the net......Hmm. Another of those mysterious songs open to a variety of interpretations - or none at all. It could also be, in part, just a stream of consciousness thing. Consensus seems to be that the song is about a young girl who, having had a fight with her parents, goes to the cinema and is bored by the violence she sees on screen, and has seen so many times before in real life. She wonders whether there's life on Mars - which might be an improvement.

More interesting even than the lyrics is the fact that the music shares genealogy with Paul Anka's song "My Way", made famous by Frank Sinatra. It is said that Paul Anka bought the rights to a French song "Comme D'habitude" and wrote the now familiar English lyrics. 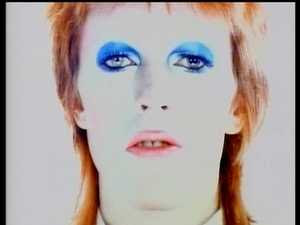 When David Bowie was asked to write English lyrics to "Comme d'habitude" in 1968, the song he came up with was "Even a Fool Learns to Love." However, Paul Anka bought the rights to the original French version, and Bowie's version was never released. "Life on Mars?" was Bowie's riposte to losing out on a fortune; it has similar chords to "My Way." (Wikipedia)

I find the chords hard to recognise, but it seems that a group of talented English musicians don't, and perform a kind of patchwork quilt of several similar-sounding songs, including "My Way" with "Life on Mars" as a background. Here it is:


But I hear a passing reader asking, "where does astrology come in?", I'll tell you my strange thoughts as I listened to the Ukulele Orchestra of Great Britain. Their performance is akin to a natal chart. There's background of a Sun sign threading through it all (the song Life on Mars), overlaid by the qualities of the Moon sign, rising sign and the placements of Mercury and Venus, and further in the background still, the more out-lying planets (the other songs featured). All can work together form a beautiful harmony, if treated correctly. If not treated right and managed well, of course the result can be less than pleasant. We have to work with what nature has given us, our natal chart, blend and bend its content, to produce the best possible melody for life. Life on Earth, that is!
Posted by Twilight at Saturday, August 01, 2009

Amazing that you've picked up on the Ukelele Orchestra as they've started to get a bigger profile in the media over here. They were featured a week or so ago on The One Show an early evening magazine type show on BBC1. Then the press picked up on them.

Great that you've picked up on that you side of the pond. I was a big Bowie fan in the 70s so good post for my memories of my teenage years. Thanks for that.

PS My uncle that makes the Kool Drums was over from France yesterday to see my Dad (his elder brother). 18 years between them but so alike. The drum is even better that on the 'net. Jimmy is doing the Edinburgh Fringe for a month and is going to call in on his way South (home) to let my Dad have a drum to play with. Bless his soul he is a very generous man. It was lovely to see the 2 boys together and gave my Dad a real lift. I want to make whatever time he has left as good as I can.

And here was I thinking that Paul had composed that piece of music and made his fortune from it and now you tell me he bought it?
Mein Gott, the stuff you uncover for this blog boggles the mind, dear T!
I suppose he bought the Tonight Show theme too?
Great pic from Himself!
XO
WWW

i dig me the ukulele music too, fun story, twilight!

Rossa~~~ That was a sweet thing for your Dad. Gestures like that must help you all a lot.
:-)

WWW ~~~ I'd thought the same, didn't realise that "My Way" was a re-working of an existing melody. we live and learn don't we? :-)

Shown ~~~ It's a gentle but happy kind of sound isn't it? I like it.
I intend going to YouTube to hear more of the Band.