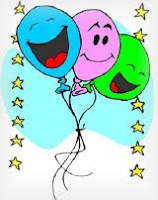 I'm declaring this week "Mirthmaker Week" on Learning Curve on the Ecliptic. After sitting through the awful "Funny People" movie last week, I need to re-orient my funnybone! There'll be posts on humor/humour, astrology and funny people, past or present - and anything else that occurs to me along the way. There are so many possible characters to investigate in this field that I'm spoilt for choice, so after this week's marathon, I'll continue to look at a Mirthmaker on each following Monday for a while.

To start, a look at someone many may have forgotten, or are too young or "foreign" like myself, to have ever known. 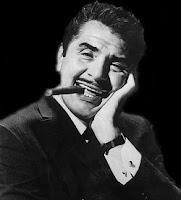 My husband recently bought a DVD compilation of some of the work of the late Ernie Kovacs. I'd never heard of him. The husband enlightened me that Kovacs was one of the first ever TV comedians, from way back in the 1950s. Watching the DVD was a prospect that, secretly, didn't fill me with glee, but I approached it with as open a mind as I could manage.

As we watched the variety of short clips I kept thinking, "this guy had strong Aquarius - or maybe prominent Uranus - he just has to have had one or the other". I had to know, so asked for a short interlude in the proceedings during which I quickly Googled "Ernie Kovacs" - et voila! Sun in Aquarius, born 23 January 1919. Not only Sun in Aquarius, but also Venus, Mars and Uranus, the sign's ruler, there too! 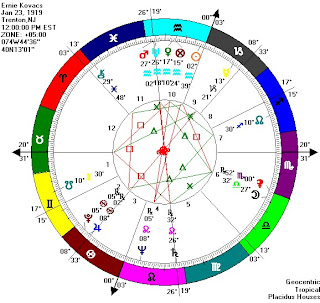 Does it take one (a Sun Aquarian) to know one? Perhaps.
Mr. Kovacs is described by Wikipedia thus:

..... an American comedian whose uninhibited, often ad-libbed, and visually experimental comic style came to influence numerous television comedy programs for years after his death in an automobile accident (in January 1962). Such iconic shows as Rowan and Martin's Laugh-In, Monty Python's Flying Circus, The Uncle Floyd Show, Saturday Night Live and even Captain Kangaroo, Sesame Street and The Electric Company, and TV hosts such as David Letterman, and Craig Ferguson are seen as utilizing Kovacs' influence.

To fully realise the man's comic genius and inventiveness it's really necessary to think back to the 1950s, the first years of TV. I doubt that any passing reader is old enough to do so.

Nobody, in those days, had fully appreciated what could be accomplished on the TV screen, nor how TV presentations could differ from, and improve on, what was already available via radio and movies, while using the best from both.

I hadn't even seen a TV set until 1953, when a group of us kids piled into a neighbour's house (back in the UK) to watch the coronation of Queen Elizabeth II. It wasn't until some years later that my parents bought our first TV set.

In the USA, I guess TV was considerably more advanced than in the UK, but even so, Ernie Kovacs was pioneering comedy in a completely new medium, and what better job for a quadruple Aquarian?

I can't see the YouTubes but do remember his comedic efforts, T. along with Milton Berle and Jack Benny. Like you, saw TV first in 1957 on a visit to an aunt and uncle in London, was completely mesmerized. we didn't get it until 1965.
Great post. Let us know what you think of the DVDs.
XO
WWW

WWW ~~~ Have seen about half of the DVDs so far. They're funny, but watching one after the other gets a bit samey, so we're having a break from watching more.

Compared with today's comedy, a young person would probably find the humor "lame". But if put in context of the time they were made, it's clear Kovacs was a comic genius. I wonder how he'd have evolved, had he lived - he'd probably be direting movies now.