I've chosen to put these two comedians together because they both make me laugh, in spite of their occasional, or sometimes frequent, descent into crude language and vulgarity. They can, by some personal magic, get away with almost anything. There's an underlying kindness and child-like delight in their own fun - at least that's what comes over to me. Both take on stand-up comedy and acting with equal ease. They are born clowns and entertainers. 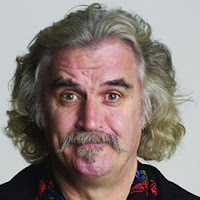 Does any clear astrological similarity link to the feeling I get from both comedians? Not at first glance - not really....erm....no wait...both have Uranus conjunct Saturn ! I have to report though that the interpretations of that aspect in two volumes from my bookshelf do not fit the Eddie and Billy the public know and love. My version would be that they both are able to find the ridiculous (Uranus) in everyday practical, routine matters (Saturn), because these two planets are so close in their natures, they blend rather than fight. 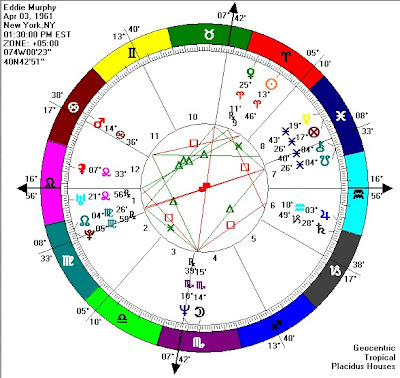 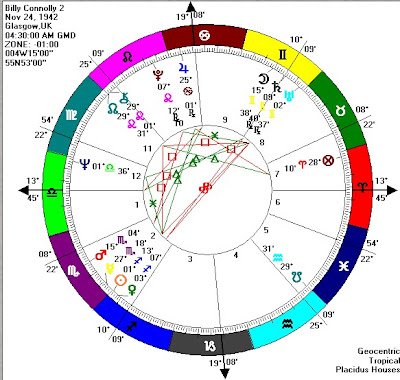 Both have Sun and Venus in a Fire sign (Aries and Sagittarius) they show great energy and enthusiasm in all they do. Both have a dollop of Scorpio in their charts - Mercury and Mars for Billy, Moon and Neptune for Eddie, adding an inner passion and intensity which has no doubt helped them reach the heights they have.

Eddie has a Grand Trine in Water signs linking Mars, Moon/Neptune and Mercury. This points to an emotional and softer character than the persona we know. I feel pretty certain that Eddie is a soft-hearted, kindly individual, underneath all the flash of his Leo ascendant.

Billy's Jupiter in sensitive Cancer trine Mercury in Scorpio could well be his "soft-spot".

I suspect that it's this underlying softness which helps these two comedians get away unscathed with more than the average comedian. I can't recall ever thinking that their humour was cruel or mean-spirited. For me, that's the litmus test of good comedy.
Posted by Twilight at Tuesday, August 18, 2009

This is a good series. I am becoming convinced that laughter is what really counts in life. These people have always known that. The way they think is apart from most people.

I'm not a great fan of Eddie Murphy, but Billy Connolly is something else. First rate.

I agree. The old saying "Laughter is the best medicine" remains true. :-)

Anthonynorth ~~~ I'm not too keen on Eddie's old stand-up routines myself, but do love all his movies.