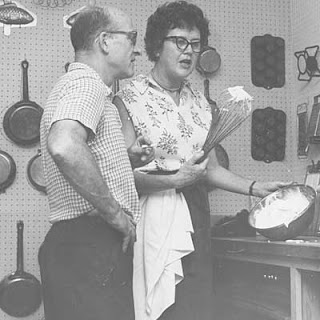 "Julie and Julia", a movie released last week, features the work of TV food expert, Julia Child. I had been going to write about Julia as part of a brief series about chefs, but really she wasn't a chef at all, in my own definition of the word. She was, to the American public, a well-loved TV personality who taught, wrote and talked about cooking and food. As far as I can tell, she didn't ever run a hotel kitchen or a restaurant. In my brief researches though I did see Julia Child as an interesting subject, especially in regard to her very happy and enduring marriage to Paul Child. I was interested to see both natal charts.(Photograh, left: Julia with her husband, Paul C. Child, whipping cream in the kitchen of her Cambridge home, November, 1963 (photograph by Dick Fish). From here.)


Julia Child was born on 15 August 1912 in Pasadena, California. 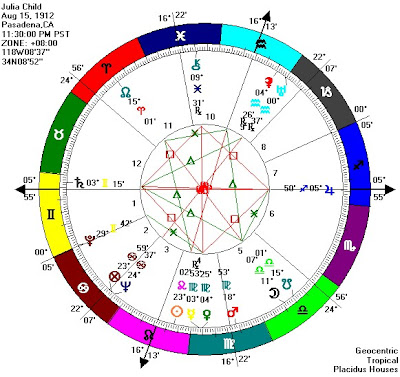 Julia didn't set out with any thought of a career with preparation of food at its core. She came from a wealthy background, majored in history at university, worked as a copywriter for a New York furniture company and outside of work led the life of a minor socialite.... until the outbreak of World War 2. She was too tall (6ft2ins) for the uniformed forces, so Julia joined the OSS (Office of Strategic Services - the intelligence agency), after a spell as typist in the Office of War Information.

All quotes come from a Vanity Fair article by Laura Jacobs:


"Julia, it turned out, had formidable organizational skills: soon enough, she was supervising an office of 40 people. In 1944 she shipped out to India. “The war,” she said, “was the change in my life.” " 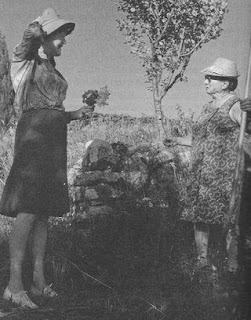 After later being transferred to China she became romantically involved with Paul Child.


"A worldly intellectual with a poetic sensibility, an artist and photographer who relished wine, women, and song, he designed war rooms for General (Lord) Mountbatten in Kandy and for General Wedemeyer in Kunming."

Intellectual = Air signs - Paul has Mercury and Mars in Aquarius. Poetic sensibility - his planet of the arts (Venus) is in dreamy poetic Pisces. Sun, Saturn and Jupiter in business-oriented, common sense Capricorn added to the rest produced an intriguing blend of art and practicality, that was something always likely to appeal greatly to Julia's Leo/Virgo/ Libra (Moon.) blend.
(Photograph, above, by Paul Child: Julia Child and Jeanne Villa from 'My Life in France').


"Paul thought Julia unworldly, unfocused, and doubtless a virgin—“a hungry hayseed” is how she would describe herself—but also steady, game, a “classy dame,” and “brave,” he wrote his twin brother, Charlie, “about being an old maid!” He was 42 to her 32, five feet ten to her six feet two. He was looking for a soulmate, but had counted Julia out. And yet their sure-footed friendship, forged over Indo-Asian food and shared danger, was climbing, slipping, into love. Which led to bed. And then, in 1946, when the war was over, marriage."

Paul introduced Julia to the joys of the culture and cuisine of Ceylon (Sri Lanka) and China and later, of France, after his transfer to Paris.


"Back in the States, the couple’s love letters reflected the playful and frankly lusty nature of their relationship. “I want to see you,” Paul wrote, “touch you, kiss you, talk with you, eat with you ? eat you, maybe.” Come 1948, could there have been a better diplomatic posting for Paul and his wife of two years than Paris? "

"Paul, when he first met Julia, in the O.S.S., described “her slight atmosphere of hysteria.” No doubt he was referring to Julia’s almost operatic vocal tonalities, the here floating, there plunging falsetto she seems to have been born with."

I wonder if this peculiar voice thing might relate to Uranus (the eccentric planet) quincunx (scratchy aspect) communications planet Mercury? 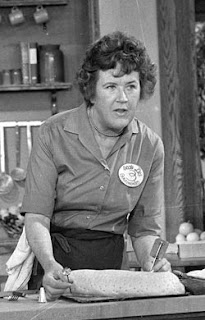 It was in France that Julia's draw to the kitchen took place. She fell in love with France, its culture and the innate flair of the French for knowing how to cook and present food. She enrolled in the Paris cooking school Le Cordon Bleu. “I would go to school in the morning,” she once said in an interview, “then for lunch time, I would go home and make love to my husband.”

Sounds like a good combination of Virgo (service) and Leo (fun and enjoyment)! 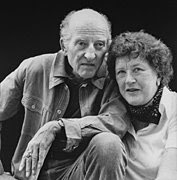 
In addition to her now iconic set of TV series, Julia Child, wrote several books on cookery as well as being co-author of a two-volume cookbook titled "Mastering the Art of French Cooking" (1961), now considered a classic in its field. 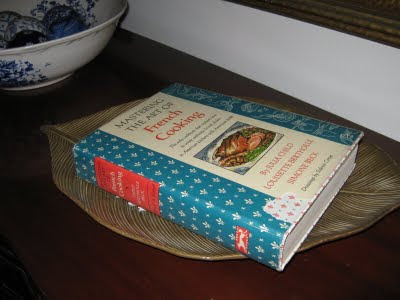 A video to illustrate Julia's style of presentation. She teaches how to make an omelette:

another artistric person with a venus /saturn contact. in this case, the square, with another square to jupiter on the opposite angle. she epitomized good taste and elegance to a generation.

Shawn ~~~ Yes. And she actually could have been a good chef proper- head of a kitchen. Her good organizational skills would have been a big asset. But she wasn't drawn to that lifestyle or even to food preparation initially. Linking up with her beloved husband seems to have brought out in her a previously hidden talent for food.