In choosing my subject for today's blog I hit some serious frustration. I don't want to focus on celebrity chefs, whose numbers seem to grow daily. What's up? Don't chefs enjoy being in a proper kitchen any more? Too hard work ? It is hard work, even today with all the best equipent and technology to hand, it's still hard to run a big kitchen to a high standard. So much easier to stand in front of a TV camera and pontificate, or to curse and swear in a reality TV show as though that were the root of a chef's skill-set.

In the words of a commenter at Huffington Post on an article about one of Gordon Ramsay's recent outbursts:

"At what point in the last 20 years did being a total uncivilized dick become acceptable, even lucrative, behavior? Did it start with Howard Stern? Jerry Springer? We have a whole generation of people that think watching or listening to people be really horrible, nasty and cruel to each other is great entertainment. WTF?"

I'm less than enchanted by the current crop of celeb chefs who appear on TV, write book after book, open cooking schools, give lectures, open strings of restaurants bearing their name but which they never visit to cook in the kitchens. There has to be at least one more chef for me to investigate, one who is actually doing a chef's work, on a daily basis.

My eye fell upon the name Paul Liebrandt. He's still in the kitchens! Bet I can't find his date of birth. 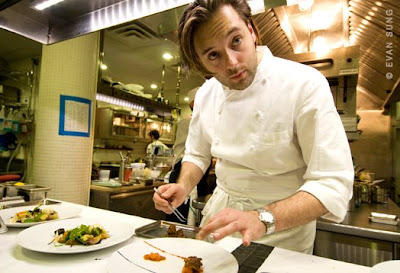 (NOTE: this birth data is not correct. A correction has been posted on 27 December 2010 SEE HERE

I did, eventually: Born 26 August 1975 in Zimbabwe to British parents. No city specified, so I've used the capital Harare (formerly Salisbury). He was raised in London and trained in some of the finest kitchens in Europe. He moved to New York in 1999, and currently is chef and co-owner of the Corton restaurant in Tribeca, a neighborhood in lower Manhattan.

"The tables are covered with white linen and set with pink roses. The whitewashed walls are bottom-lit, like a giant fresco, and stenciled with butterflies, birds, and sylvan tree branches colored here and there with a solitary gold leaf. There’s a peaceful, palate-cleansing quality to all this icy, Altoid whiteness, and as dinner progresses you get a sense of time suspended, of being pleasantly inoculated from the cares of the outside world.
Peace and light aren’t chef Paul Liebrandt’s usual M.O., of course. The English wunderkind (he’s only 32) has been known to sprinkle eel with crystallized violets and flavor his côte de boeuf with coffee grinds before theatrically finishing it in clouds of burning hay. But on this latest tour through the New York restaurant jungle (this is his fourth in eight years), the perpetually promising chef has found his footing"(HERE)

What made you decide to become a chef?I don't know. I like cooking. I like the excitement of the kitchen. I like the heat, the violence, the sweat, the punishing hours. It's freedom in the kitchen.
What was it like working for Marco Pierre White?
Hard. But he's a very fair man. If you go in there, and you're young, and you work your bollocks off there's a lot to be learned. If not, you wouldn't last in his kitchen two seconds. 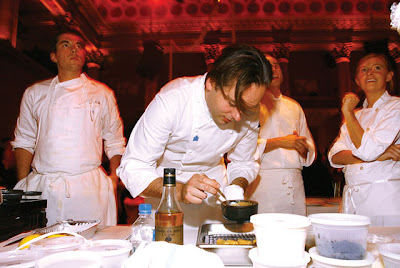 What did you learn from him?
Discipline. How to beat people. You notice the scar above my eye here? Well, there you go. How to take a bunch of young guys like I had here when I started six months ago, who didn't know how to hold a frying pan properly and beat them, literally, beat them into shape within a matter of a couple of months and get three stars from the New York Times. I wouldn't have been able to do it without having the solid training I did."

Sounds as though Gordon Ramsay-type antics are par for the course in chefdom then! I should have realised as much from my own experience of watching more than one chef chase a waiter with a carving knife, when I worked in hotels, long ago.

This chart for Paul Liebrandt will give correct planetary placements in signs, apart from degree of the Moon and rising sign. That will suffice for my purpose. He has moved around from Africa to England to France and Europe to the USA, so relocation will have shunted the ascendant and houses more than once. 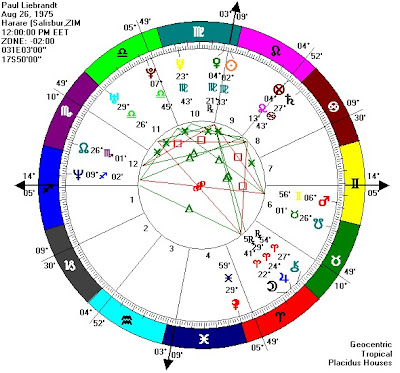 Natal Sun conjoining Venus - an artistic guy, in Virgo - a discerning and fairly disciplined one to boot. Mercury lies at the other end of Virgo - one of its home signs so is pure and unsullied: he'll be a clear thinker, and expect precision from others.

The 2009 Eat Out Awards describe his food:
"Renegade chef Paul Liebrandt's studied food is as artful on the plate as it is on the palate." 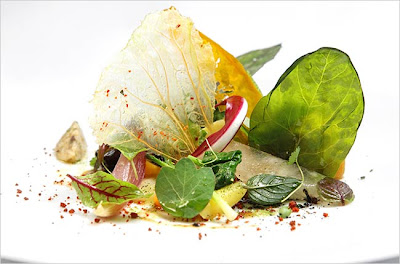 
If I didn't know this is the chart of a chef I'd have guessed at writer and/or illustrator. Moon will be in Aries, somewhere in the second half of the sign. This Aries influence reflects his "get-up-and-go", the energy he has needed to pursue his dream, and with Jupiter, planet of expansion, exaggeration and luck lying also in Aries (possibly close enough to be termed conjunct) his energetic go-getter nature is further underlined.

Saturn, planet of discipline, business and tradition is the sole planet in Cancer and lies sextile (helpful aspect) to Mercury. This hints at a disciplined, organised mind - a definite plus for a chef who wants to "run a tight ship" - as the best of them do. Mars in Gemini is in harmonious trine to Pluto in Libra, and opposite Neptune in Sagittarius - so Mars, the personal energy planet is linked to the two outer planets which represent power and creativity.

Liebrandt has the reputation of being something of a renegade, inventive as well as creative. It's interesting then, that Uranus, the renegade's planet is in harmonious (though out-of-sign) sextile to his Sun/Venus conjunction. 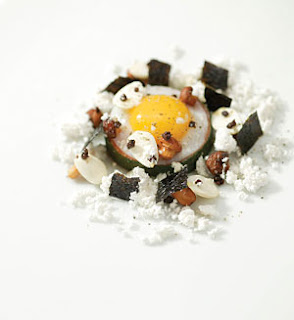 There's nothing to specify food preparation in this, or in fact in any of the chef charts I've looked at. What has to, and does, come through is creativity, discipline, energy, business sense and an artistic nature. These characteristics could be put to work in a number of professions or jobs. It's surprising that there isn't some tiny indicator which points towards catering. This could, of course, come via house position, which remains unknown without a correct time of birth. It could come via ascendant or midheaven. 6th house is the house of service, midheaven the area of career, ascendant the side of character shown to the world at large; any or all of these could underline a leaning towards a career in food, which I continue to think might involve Taurus, and/or Cancer, at 6th house or midheaven or ascendant.
Posted by Twilight at Monday, August 03, 2009

Thanks for another introduction to someone I hadn't yet heard of!!
One little offputting thing was his hair hanging over the bowl he appears to be working on.
XO
WWW

WWW ~~~ Yes, that hadn't struck me until you mentioned it, but you're right! I suppose that was the original purpose for the traditional chef's hat - to keep hair out of food - and with lots of room up-top for air circulation.

Maybe he and the others (in one of the pics) took their headcovering off for photographs (but I'm reaching, I think!) :-)

Good post indeed! Thanks for sharing such nice information.
http://www.pellakitchens.com

Kitchen design ~~ Hi there! I'm pleased that you found it of interest. :-)

His date and time of birth are wrong, he was born at 10.20pm on the 26th August 1976 in Salisbury Rhodesia (now Zimbabwe) I know , because i am his mother. Do hope this helps you to do the correct chart for Paul (Liebrandt) Best Wishes Veda (Paul's Mother)

Oh hi there Veda! Thank you so much for letting me know the birth data I used wasn't correct. I'm grateful, and will repost the article, updated with a correct chart and notes on it with any other new information I can find, soon (probably just after Christmas). It's probably time to start doing a few posts about chefs again, (if I can find their birth dates!) A re-post on Paul will be an introduction.

Many thanks again - and Season's Greetings too!