The Sun moves through the zodiac sign of Virgo during the period 23 August to 23September, give or take a day, for it can vary from year to year.

Astrologer C.E.O. Carter's take on Virgo is a good read, I like his style, it's a wee bit old fashioned, but he comes up with ideas others seem to miss. 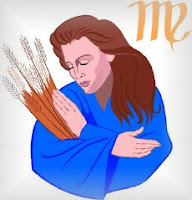 Virgo is usually depicted by a woman carrying some ears of wheat. It's interesting that the first days of the period western astrologers call Virgo, in Roman times marked a festival called Opiconsivia. On 25 August a kind of state harvest festival for the stowing away of crops was held. It honored both the goddess Ops, also sometimes called Opis (statue below), wife of Saturn, goddess of plenty, & protectress of all connected with agriculture; and Consus, god of the granary. Remnants of Ops and Consus remain with us in our dictionaries to this day: the words "opulence", "copious", "conserve" are some examples. 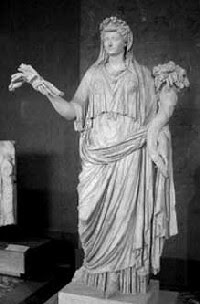 "A Virgo" is used as shorthand form for "a person who was born when the Sun was in the zodiac sign of Virgo". But, as I keep reminding myself, and any stray passing readers, there truly is no such thing as "A Virgo" or "A....(insert zodiac sign of choice)". There are as many versions of a person born when the Sun was in Virgo as there are snowflakes when they begin to fall in a few months' time.

Theoretically the zodiac sign in which the Sun lies at time of birth ought to indicate a set of personality traits which can be identified quite clearly in the individual. More often than not, at least one of a fairly wide variety of traits for each sign IS present, but it's not the whole story, and quite often the whole story will dampen down or liven up the Sun sign's traditional signature.

Keywords for Virgo: modest, meticulous, practical, reliable, organised, analytical, fussy, critical, prone to worry too much, perfectionist.
The sign is one of two ruled by planet Mercury, the communications planet. 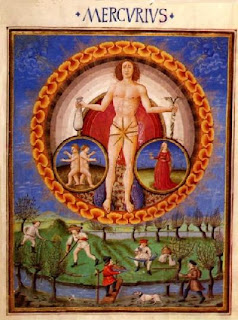 
I haven't knowingly crossed paths with many Sun in Virgo types. My husband's eldest daughter has the sign emphasised heavily in her natal chart, with five planets including Sun there. She has spent most of her career working in the newspaper business - which fits Virgo well, being one of the two signs ruled by Mercury, planet of communication. She also has Leo featured prominently, which tones her Earthy Virgo-ness to a brighter, warmer hue.

The only other Sun Virgo I've known was a gal I worked with for around twenty years. We used to tease her for her untidy desk and illegible scrawly handwriting, telling her that she was not a credit to Virgo, the neatest sign in the zodiac. She was, underneath the clutter, very organised mentally, and has over the years, since I retired, progressed to a fairly senior management post. She was highly conscientious, and one of the most capable people I've ever had the pleasure of working with.

There ends my own experience of Sun in Virgo people. My only planet in that sign is Neptune, which is generational rather than personal, though it is in trine to my natal Mercury in Capricorn, which might account for my compatibility with Sun Virgo people. Virgo, as a sign, isn't at all compatible with my own Sun sign, Aquarius. Aquarius and Virgo lie quincunx to one another in the chart, that's one sign beyond direct opposition - and is just about as incompatible as one could get. The two signs are Earth and Air, Fixed and Mutable, not harmonious at all. But, as I keep reminding myself, the Sun sign is but one part, though an important one, making up the whole personality.
Posted by Twilight at Tuesday, August 25, 2009

I read those keywords three or four times. One person's meticulous, fussy, critical and perfectionist is another person's crabby, I guess. At least, that's what I suspect others may think of me.
Being that way is sometimes irresistible. But, I restrained myself from pointing out how to spell Joni over on Thinks Happen.

Kaleymorris ~~~ But you have Leo rising, as does your Papa, which gives your personality a playful and much warmer overlay.

Now see - you are even criticising your self here! Tsk!!

Re thinks happen - I had to nag, nag, nag to get him to publish my comment which I added early this morning. I didn't notice his slip though. I'll ask him if he can see his "deliberate" mistake.
;-)

I fixed it on Flickr and forgot to change it on the blog. Fixed now.
I added a link to "Big Yellow Taxi" on the Flickr version too.

I really must learn more about the signs some time. My interest has always been more general.

Anthonynorth ~~~ It's a fascinating study, but quite difficult to get the exact story - lost in the mists of time!

fun story, twilight!
as an aquarian sun with virgo rising, i find myself volunteering to perform routine chores for other people as a way of making friends.
i think that earth and air elements are not inimical in the same way as earth is to fire, or air is to water.
earth and air share an objectivity that allows them to get along.

Shawn ~~Hi!
Ah! Aquarius/Virgo in the house! ;-)
That's almost as awkward as my natal Aquarius/Cancer, but we learn to live with it and make the best of it, drawing what we like best from both.

I remember once commenting that Earth and Air = a dust devil! LOL!

So much depends on what makes up the rest of our charts. As long as there's a reasonable balance of elements, modes etc almost any combination can work well (IMHO).
:-)

News flash on the perfectionist front: AJ is worse.

Kaleymorris ....Yes, I'm not surprised at that, his b'day is right on the cusp of Leo/Virgo, so he quite likely has Virgo personal planets, maybe even ascendant. I haven't seen his chart so can't be sure. The Leo thread from Himself to you and AJ is obvious though, I think. Maybe your Virgo came from your Mama or grandparents. :)

We're in Deadwood just now, been on a drive around the Black Hills and into Wyoming to Devils Tower -no apostrophe in proper names ;-)
Ruhsmore tomorrow.