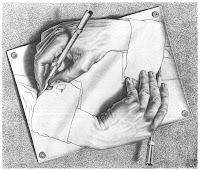 Maurits Cornelis Escher (M.C. Escher): I'm always especially interested to see natal charts with a cluster of planets in one sign. When the chart belongs to an artist, one we know a little about, it's even better. Theoretically, such a chart ought to more clearly indicate sign characteristics of the emphasised sign. While the private side of a personality remains unknown, in the case of an artist his work displays something of his inner self.

M.C. Escher was born on 17 June 1898 in Leeuwarden, Netherlands. Astrodatabank gives his time of birth as 6.55am. 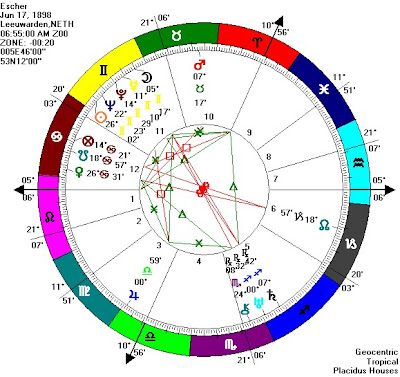 5 planets in Gemini! Mutable Air sign, known as sign of the communicator. All three Air signs (Libra and Aquarius are the others) are mentally focused signs. Whereas Libra's focus is balance and diplomacy, Aquarius is logic and analysis driven, Gemini is the all-purpose communicator, who can turn his head (and in this case hand) to just about anything, as long as it communicates his thoughts to others. And, oh my! Didn't Escher have typical Gemini facial structure and build? Gaunt, long face, wiry body. 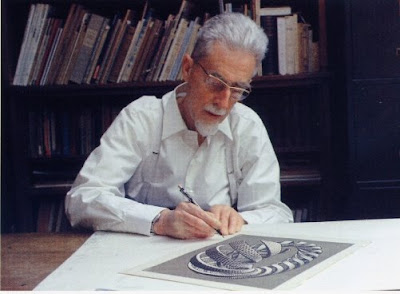 Escher's style of art is very mental - or should that be cerebral? His artwork does not come across as emotionally-led. His lithographs and woodcuts are based, in the main, on mathematics, relativity, geometric shapes and patterns, space, symmetry, impossible situations, and tesselation (tiling).

In astrology Saturn rules mathematics, so I would expect to find Saturn hooked up fairly tightly to other personal planets or points in some way. In Escher's case Saturn is conjunct Uranus - these two planets in Sagittarius lie in opposition to Moon, Mercury and Pluto in Gemini, semi-sextile Jupiter in Libra and quincunx Mars in Taurus. So I'd say that Saturn was pretty well anchored in Escher's nature, with both harmony and a touch of scratchiness (from the Saturn/Mars aspect).

Venus, the softer side of artistry lies in Cancer semi-sextile Escher's natal Sun. While this softer side seldom surfaces in his work, it is no doubt part of his "private" personality - that known to his wife and family.

Wikipedia tells us that Escher was a sickly child, and ill health impeded his academic progress in youth. That unfortunate circumstance may have been what turned him to the decorative arts rather than a career in architecture, which he probably would have preferred (that's a guess!)

The work of all artists is subject to copright, of course. I usually feature a few small representations in these posts, to illustrate points, hoping that should the copyright police wander by, they'll accept that the images are used as a kind of educational tool. (Ahem) No money being made here! M.C. Escher's work, whenever featured on websites is always very carefully marked thus (as for instance at Jill Britton's Escher Gallery): "All M.C. Escher works (c)copyright Cordon Art BV - Baarn - the Netherlands. Used by permission. All rights reserved."I'm loath to impinge, yet cannot resist showing just four examples. For more and bigger versions, please do visit the above gallery website. 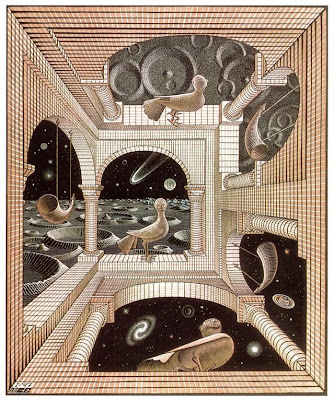 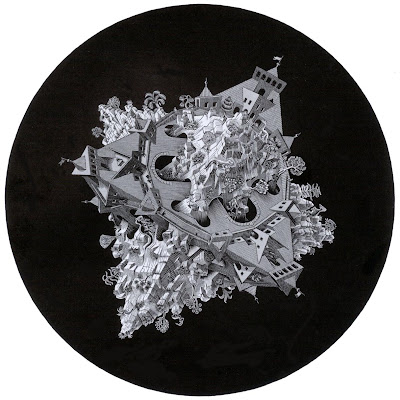 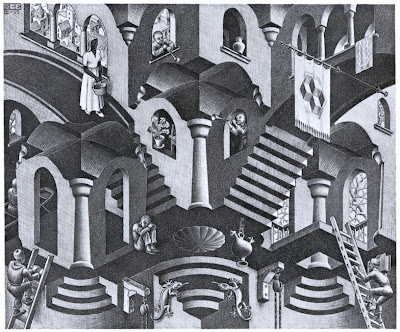 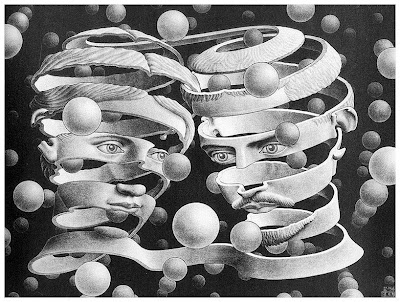 Oh I so enjoy Escher. thanks for the memories.
XO
WWW

Always it's a similar story with the greats of art, music, literature - loner, adversity, sickly, failed schooling ... It's what creates them, I'm sure. Turns them in on themselves to discover their potential.