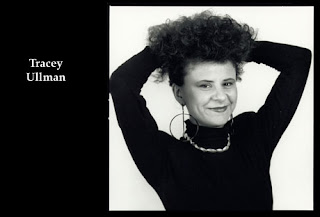 My husband was a great fan of "the old" Saturday Night Live. Nowadays it appears to have lost its early sparkle (and that's putting it kindly!). He wanted to convince me of SNL's former glories, so bought a DVD featuring Gilda Radner's contributions to the show. We watched it the past few evenings. She certainly WAS a brilliant comedienne. As I watched I was continually reminded of Tracy Ullman.

The two comediennes were born some 13 years and 5,000 miles apart. It's possible that Tracy Ullman got her inspiration from watching Gilda Radner's performances. The ability to invent hilarious characters and play them with consistent brilliance and humour is the mainstay of both performers' acts. Gilda Radner's regular characters included Rosanne Rosannadanna, Emily Litella, and Baba Wawa. Tracy Ullman slipped from one crazy character to another in her shows, characters such as Carmel Pinkum, a lady who's "different" , Nadia, the Russian trapeze artist, Dr. Jillian Smalls, radio psychologist, Kiki Howard-Smith, pro golfer from Australia, Ariel, a singer (her big hit was "Slit My Wrists") .
Gilda Radner born 28 June 1946, Detroit, Michigan
Tracy Ullman born 30 December 1959, Slough, England
No times known. I looked at 12 noon charts for both women, wondering if I'd find any similarities.
1. Both have Sun, Moon and Saturn within a 30* span.
Radner Moon 29.53* Gemini, Sun 6* Cancer, Saturn 25* Cancer
Ullman Sun 8*Capricorn, Saturn 9*Capricorn, Moon 17* Capricorn.
2. Both have all planets within one half of the chart.
3. Both have two stelliums
4. Both have Jupiter trine Uranus -Radner 17 Libra/18 Gemini. Ullman 18 Sag./20 Leo
5. Radner has Mercury sextile Neptune, Ullman has Mercury trine Uranus.
6. Their Suns lie opposite each other within 2 degrees, in cardinal signs, Cancer/Capricorn.
Strange!

Closely grouped planets including stelliums indicate intense focus in certain areas. It's a pity I couldn't find times of birth. Even without times though, it's obvious that to achieve the kind of success these ladies enjoyed, focus was a necessity!
Jupiter trine Uranus - Jupiter expands things, Uranus likes the eccentric or unexpected. Both ladies created larger than life eccentric characters, aided and abetted by their Mercury placements harmonious with Uranus or Neptune.
I'm not sure what the Sun/Moon/Saturn within 30* in both charts reveals. It's a definite similarity though. Symbolically it might mean that heart and soul went into their work ? I don't know.

Tragically, Gilda Radner died from ovarian cancer in 1989. On the day of her death, 20 May 1989, it is remarkable that Uranus, Neptune and Saturn at 4*, 12* and 13* Capricorn, (all retrograde) opposed her natal sun at 6* Cancer. And.....those three planets on the same day were conjunct Tracy Ullman's Sun/Saturn/Moon.
That IS spooky!
Posted by Twilight at Monday, January 01, 2007

Tracy Ullman follows me around. I went to Italia Conti, a performing arts school in London. She did too. Many years later, when I worked in the gift industry, I met a wonderful man named Danny Seo. Business partner? Tracy Ullman!

Here is her time (according to AstroTheme):
Tracey ULLMAN 3:15 AM

FYI - Since you moderate, I can put this here, but you may not want to post it. I found AstroThemes has a great Astrological database for famous people of all types. http://www.astrotheme.fr/en/portraits/DpyV77v2J6dG.htm

I have had some odd things happen since you tweaked your HTML on leaving comments. If I open in a new window, I am good, but if I just click to use the pop up, I can't increase the window to show all the elements, so can't post.

Thanks for the comments VB. I published both anyway, the 2nd might be helpful if anyone else reads. Not sure what I can do - maybe ask advice of Blogger.

Interesting re T.Ullman and you, and thanks for her time of birth too.
I've used Astrotheme before, but must have forgotten to try it in this case. :-)

VB -I've re-set the comments thingie to be 'unmoderated', I'll try it that way for a while.
Ann