The Weather, Comets and Astrology 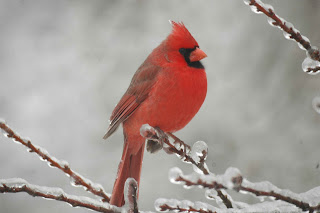 A cardinal visiting our backyard for his breakfast yesterday.
Whilst I don't believe that "The End Times" are nigh, the long string of recent freak weather detailed at The Great Red Comet blog http://sky-watch.blogspot.com/ does give cause for thought, especially regarding Comet McNaught's possible effect on our weather since it appeared in our skies. (Late addition - please see interesting information posted today on this topic at Jude Cowell's site http://starsoverwashington.blogspot.com/ )
In astrology we believe "as above, so below". Above us last week in the USA and Europe was a rare sight (for those lucky enough to be in the right place at the right time). Below, here on Earth, many people experienced rare weather. To be reasonable about this, it IS mid-winter in the northern hemisphere. Skeptics will say "What do you expect?" Agreed - we expect it to be seasonally cold or hot, but the longlasting and severe swath of Arctic weather presently spreading across the USA is more severe than normal. Oklahoma has been declared a Federal Disaster area by President Bush - that's rare! Scientists say that the only way an object such as a comet can affect the Earth is to hit it. How can they be so sure ?
I'm not in a position to comment on the rest of the weather items mentioned in The Red Comet blog, but grouped together as they are, it inclines one to pause and wonder.
More on weather and astrology at a blog written by Ken Paone, who, I understand, has been working with Kepler's long-range weather forecasting method for about 14 years.
"The Weather Alternative" http://theweatheralternative.blogspot.com/
On 27 December 2006 the author told of an historic snow storm.
"January 12, 2007 will mark the 119th anniversary of the Children’s Blizzard. Also known as the Schoolhouse Blizzard or the Schoolchildren’s Blizzard, this powerful storm hit the U.S. Plains unexpectedly on January 12, 1888. Only those who lived close to telegraph offices or railroad stations received news of the approaching storm from the U.S. Signal Corps. Many people, however, were caught unaware. Children were trapped in one-room schoolhouses or met their fate trying to find their way back home. Farmers were caught without protection taking care of their livestock as were family members doing errands in town. It is estimated that 235 people died that day on the Dakota-Nebraska prairie—more than a hundred of them children.
He goes on to say

The astro-meteorology behind the Children’s Blizzard shows that on the 11th and 12th of January Mars conjoined Uranus as Mercury made a 90 degree angle to Mars and Uranus. Mars-Uranus contacts indicate acute, energetic, erratic action and provoke wind velocities of varying intensities. Mercury-Uranus is known to provoke falling temperatures and erratic gusts of wind. Mercury-Mars action indicates sudden brief spurts of whipping winds....................................

This January(2007), roughly from the 27th through the 30th, shows that the solar eclipse of March 29, 2006 will be activated. The implications are that a powerful storm, perhaps a blizzard, will develop over the Plains and push eastward across the Mississippi Valley and toward the East Coast. I’m in no wise thinking that this storm will be anything like the Children’s Blizzard of 1888. The similarity resides in the fact that, in both cases, eclipse charts are involved. The planetary energies involved, however, are different. This January we will be dealing with a Mercury-Saturn opposition, a sure harbinger of a strong low pressure system."
So..... more fun to come then ????
Posted by Twilight at Tuesday, January 16, 2007

Woo! The 1888 Blizzard was unknown to me being always on the East coast and no known ancestry from the Plains region--thanks!

Have been watching McNaught now for a few months... first thought I was tripping when I saw such a bright object around the sky here... Mars appeared nearby from where situated, and I asked around the mental health ceter I frequent...

Sirius? Na... what could it be? A Super-nova? The Space Shuttle? These were cast away with mention of a local about the bright comet he'd been watching. Web searches landed me in the domains of revelation13, some atronomy graph sites, constellation marking sites, and here. As one who stands profoundly aware of my own tendancy to project unresolved guilt on others, I only resonate slightly with fundamentalists, who seem unable to stand-by the forest of humanity, and seem more interested in "restoring health" though broad-stroke "clear-cutting" of humanity.

This doesn't mean these folks are missing their marbles... in fact, they seem to keep track of them better than many scientists and politicians. I hope as Earth Changes respond to both the Macrocosmic committments of soul groups and humanity as a whole, Microcosmic personal decisions may situate us in opportunities for compassionate service.

With McNaught forcast toward passing through Aries while outshining the lowest point of the "inverted triangle" (in the North) around 1/06/2008, and with me just beginning to grow up with regards my mental illness, I turn in a person-oriented sense toward "the Lord in Everyman." Chin-up soldiers, no-one said the Mahabharata was over... at least, we can remember Source in midst of tribulation....

Thanks for your visit. so the comet will pass thru Aries 6 January 2008? - Hmmmm. Well.... Mars and Pluto will be opposing each other then - I'm not so sure I like the sound of that!

Thanks for your response. I had been on a voluntary media blackout for a while now, and viewing McNaught may have been a factor in my reconnecting with global discussion... this same day of above Anon submission, a National Weather web-site reflected the area around Bethesda and DC as being q'ued-up for ice, freezing rain, etc.

This map dovetailed with some intuitive hunches concerning our collective manifestation of Comet McNaught (appearing to have emerged from galactic center circa 200X) for facilitating important Cosmic and Personal lessons.

You mentioned Mars Opposing Pluto around 12/27/2007 through 1/6/2008 (the span when McNaught moves through Aries and "the Triangle." I am so new to the Astrology Game/Art, I looked this up and, in addition to some stuff upon which to project fear and paranoia, I found this:

Ordinary life often seems drab and uninteresting to you and you must have something that stirs your imagination, some vision or ideal or dream to motivate you. You have a strong urge to act out your fantasies or to live your dream, and you will DO things that others only talk about or dream about. Artistic creation, drama, or other areas in which you can express yourself imaginatively are excellent for you.

Work that serves only your own narrow personal interests does not satisfy you. You may lack the competitive edge, the fighting spirit, the me-first attitude that is often required for material advancement and success. You also tend to either overestimate or underestimate your own power and abilities.

You perceive the cruel edge in people, and understand its source. As you deal with your own ruthlessness, you learn how to respond to it in others without risking your physical well-being. Self-confidence develops out of self-control in your interaction with others."


...my intuitive perspectives have been further informed by predictions of Arten and Pursah, two ascended Masters who appeared to facilitate author Gary Renard's comprehension of ACIM (Course in Miracles) lessons' in Quantum Forgiveness. (Chronicled in Disappearance of the Universe and Your Immortal Reality, both penned by Renard)

Perhaps McNaught may facilitate and opportunity for a global group-therapy session where people can come clean about what has concerned them most dearly, in the cooperative Spirit often brought forth in times where our conventions of physical security appear being turned over like a neglected compost pile.

I should like, if inspired, for us to continue dialog (and maybe include some of your other readers) concerning this... glad I've found a commentator who shuns the immense temptations of paranoia during times of "Earth Change."

I have had the wrong comet name in mind... more than on "McNaught..."

Oct 29 16h within 0.64 degrees of Jupiter, and charted to encounter two globular cluster before Nov 1st...

This puupy could be worth lookin' inta!