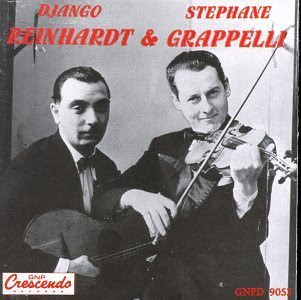 Stephane Grappelli and Django Reinhardt are legendary figures in the world of jazz, in fact, in music generally.
Many, many years before I met my jazz-fanatic husband, I had recognised and enjoyed the playing of Stephane Grappelli. He comprised my only crumb of jazz-related knowledge, for offering up to my soon-to-be spouse, who was duly impressed!!
Grappelli played violin and Reinhardt, originally a violinist too, played guitar. An accidental fire badly damaged the fourth and fifth fingers Reinhardt's left hand, this led him to take up guitar, which he mastered with such style and skill that the late Benny Green commented :
" I am quite convinced that Django Reinhardt could have played great unaccompanied solos on his head, under water, or wearing boxing-gloves, there being no extremity I could imagine that would have curbed his gift. As far as guitar-playing is concerned, he is Genesis, and we don't ask what came before that."
Stephane Grappelli and Django Reinhardt met in 1934, in France. Together with two others playing guitar and a fifth musician on double bass they formed the legendary Hot Club of France quintet. They continued to play together until the start of World War 2. Microphones were hardly ever available in those days, it wasn't easy for a violin to be heard. Jazz played by string instruments only was quite a revolution. Revolution ? We would expect no less from a couple of Aquarian Suns! They actually invented a whole new style of music, which lives on today.
Django Reinhardt died in 1953 after a stroke, age 43. Stephane Grapelli, who lived until 1997, died after a hernia operation, aged 89.
The two men were quite different personality-wise. Grapelli was said to be calm and spohisticated. Reinhardt, with his gypsy background, tended towards the wild and woolly, volatile, and undisciplined. They were, on the surface, an unlikely pair, yet they composed an ideal complementary partnership when playing together. Their birthdays were close, but 2 years apart.
Stephane Grappelli born 26 January 1908 in Paris, France.
Django Reinhardt born 23 January 1910 in Liberchies, Pont a Celles, Belgium
Two first decanate Aquarian Suns, both with Mercury in Aquarius, both with Venus in Pisces (using 12 noon charts. Time of birth, if available, would be unreliable)
Their generational planets match too -Uranus in Capricorn, Neptune in Cancer and Pluto in Gemini. ( Pluto in Gemini certainly gave us some extraordinary talents!)
The similarities, without benefit of birth times, end there.
Grappelli's Moon is at 3 Scorpio, Reinhardt's at 7 Cancer (unless time of birth makes an appreciable difference in either case.)
Grappelli's Mars is in Aries, Reinhardt's in Taurus
Grapelli's Jupiter is in Leo and Reinhardt's Libra,
Saturn in Pisces for Grappelli and in Aries for Reinhardt.
Both men have generational Neptune and Uranus in opposition on the Cancer/Capricorn axis, but Reinhardt also has an opposition between Jupiter and Saturn on the Aries/Libra axis, which then forms a Grand Cross, probably his more abrasive personality stems from this.
Grappelli's chart shows a second opposition too, between Sun and Jupiter (Aquarius/Leo), but his chart also contains a Water Grand Trine (Neptune/Venus/Moon) which no doubt helps to account for his calmer disposition.
It's enlightening to see how two men with chart similarities can be so different, yet possess an innate ability to work together, blending their differences to produce real magic.
Posted by Twilight at Thursday, January 25, 2007

I loved this post! When I was younger, I too played my Stephane Grapelli/Django Reinhardt records (which I still have out in the garage). Together, they took me into another musical world. Thank you!

LOL! I wonder if your garage looks like ours - one long wall covered floor to ceiling with LPs.
Aaaaargh!
Glad you liked the blog entry, and thank you for popping in to say so.