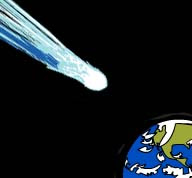 Jonathan Cainer's website alert to the fact that Comet McNaught might be visible these nights led me to go see if I could spot it near the horizon, and later, seek more information about comets in general.
So far I haven't been able to see the comet, we have had clear skies for the past 2 nights, and found a reasonably clear horizon. Perhaps in SW Oklahoma we are too far south ? Most photographs of the comet I've seen on-line come from more northerly locations, Canada, northern Europe, or Scotland.
I found some interesting facts and figures on comets here:
http://www.geocities.com/mahtezcatpoc/comets.html
and
http://accessnewage.com/articles/astro/HALE-BOP.HTM
What has intrigued me is that the two comets which were visible in 1996 and 1997 might have had influence in my own life. It could be pure coincidence, of course, or due to a combination of other astrological influences which were certainly present at those times. I thought it interesting enough to relate my story, anyway.
According to the first of the above linked sites
" Comet Hyakutake perihelioned on May 1, 1996 at 11 Taurus 26 and attained a maximum magnitude of +0. "
In my natal chart the South Node of the Moon lies at 13 Taurus, with Uranus conjunct - this was close to the comet's perihelion! On 21 April 1996, 10 days before the comet perihelioned one of my life's biggest disasters occurred.
A fire broke out in a building adjoining the 2nd floor apartment where I and my late partner had lived for some 23 years. The fire spread, engulfed our apartment and destroyed everything in it. We escaped with our lives, the few clothes we had on and, fortunately, my handbag, with credit card and some cash. We had to start again, from scratch. It was difficult at first. The alternative apartment we found wasn't pleasant. We suffered a break-in during the first few months - how unlucky were those burglars, for we had next to nothing to steal!
In early spring of the following year, 1997, I made a determined attempt to find a different place to live. In late February Comet Hale-Bopp was conjunct my Sun at 6*46 Aquarius, according to the second link above. In early March I found a nice and affordable house to rent. But it seems that the comet's influence persisted.... my mother, who was in reasonably good health for her age at the time, helped us to move in to the new abode. Within 3 months she was diagnosed with cancer, and by August she had died. She left me her home by the sea, 70 miles away. We were unable to move at the time due to my job, but when I retired in 1999 we moved to live there .
The chain of events had not ended. My partner became ill, deteriorated gradually and died early in 2003. The chain continued. I met my present husband, we married in 2004 and I sold my home and emigrated to the USA late that year. The chain ends here, in Oklahoma!
As I pointed out , these matters could well be coincidental, or connected to other astrological events in my natal chart (notably a Saturn return in 1997, Pluto conjunct my natal Venus on two occasions in 2003, also Uranus was close to my Sun all through 1996). I can't help feeling though that one or other (or both) those comets, so close to sensitive points in my natal chart, initiated or intensified this chain of events. It has been the most eventful time of my life! A visit to The Twilight Zone ?
Posted by Twilight at Wednesday, January 10, 2007