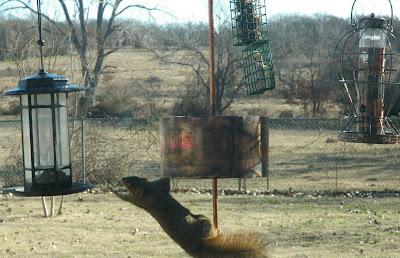 I don't know whether wild animals are thought to be subject to planetary energies. If my own view of astrology is anywhere near the mark, then they must be, but perhaps in a slightly different way from humans. I started thinking about this after watching a squirrel in our backyard. Squirrels are typically Mercurial ! If they were humans they'd have Mercury and Gemini prominent in their charts. They are so darned clever, mobile, and fast.
We have an ongoing competition with the little darlin's to keep them off our bird feeders. They outwit us every time. Son-in-law made a specially designed bird-feeder stand for us, which he hoped would solve the problem for good. Wrong! Cyril, our resident nuisance, found a way to climb it and get at the woodpecker block and seeds this morning (see pic above). Clever little cuss! We don't mind him eating the birds' goodies, but he tends to gnaw the feeder, or break it, or bring the whole caboodle to the ground by launching himself, rocket-like, from a great distance.
How come that a cute little creature like Cyril can outsmart any number of his two-legged neighbours? According to son-in-law, there's a whole 'underground' working on various plans to combat this problem, trying to at least win a battle, if not the war. To date nobody has been successful.
According to an aricle here
http://timethief.wordpress.com/2006/12/24/squirrels-outwitting-trees-survival-strategy/
it's not only humans the squirrels compete with, but trees also. And what's more, the shrewd little creatures seem to be able to predict when a bumper crop of cones is due. That walnut sized brain of theirs must work in overdrive, and perhaps even has psychic capabilities.
I suppose Cyril has but few things on his mind - survival: food, shelter and whoopee!. He doesn't have to worry about the price of gas, moronic politicians, or whether his bum looks too big. He's pretty focused. Perhaps WE should emulate the attitude of our Mercurial friend and concentrate only on food, shelter and whoopee!!!
Posted by Twilight at Monday, January 08, 2007

The little darling is smarter than your husband!

Yes, DeAna, they sure are! Even this morning with ice everywhere, they are still busy busy busy!