Global Warming and Pluto in Capricorn 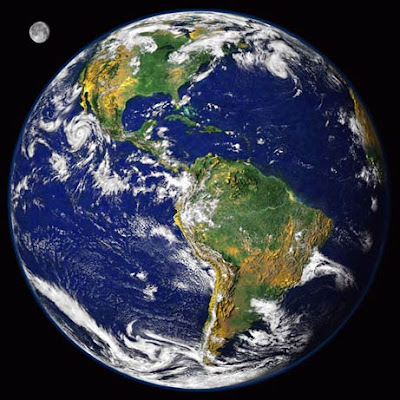 This is a subject about which I feel passionate. Perhaps the most telling symbolism of it in astrology is Pluto's coming journey through Capricorn, starting around December 2008.

Greg Foster describes the energies of Pluto in Capricorn in an article carried at Eric Francis's Planet Waves website :
http://planetwavesweekly.com/parallel/articles/pluto_capricorn.html
"Pluto spends roughly 18 of the 248 years of his trip around our local star in Capricorn. When this energy puts on the heavy lead robe of the sign of the Sea-Goat, the 10-words-or-less message is get real; change is the only constant. This is partly because Capricorn is the energy we depend upon to hold things stable; Pluto is the energy of the most compelling changes."
I once read a description of Pluto energy which likened it to an abscess - drawing out impurities, painfully, slowly, until a point is reached when the abscess bursts. The blood has then been cleansed, healing begins. That description rang true to me.
Applying the analogy of an abscess and combining it with Cardinal Earth of Capricorn leads to a mental picture of Earth and its civilised structures being subjected to a draining of impurities and organisms which spell danger to it. Some pain to be endured, leading to eventual cleansing and healing.
Cardinal Earth. Capricorn, part of the solstice axis. It's something vitally important. It's not about war in Iraq or Iran, or problems with North Korea, important as those matters are. As I see it - it's about Earth, our home. The Earth itself will be subjected to a cleansing of the ills visited on it by too many inhabitants - through ignorance initially, and carelessness latterly . The pain is likely to be an intense experience for some, and intensly painful for others to watch. The transit covers an 18 year period, the first 9 years will no doubt be the hardest.
Al Gore's "An Inconvenient Truth" was a wake-up call to the USA, and to the world. It has been heard by many, but not by the US government as yet. Even enlightened governments back away from the radical changes which must be made if real progress is ever to be made in stemming the rise of human-induced warming, changes which might give us more time. A "10-year window of opportunity" has been mentioned by some scientists. I don't think the window is that wide. I think perhaps the window is almost closed now, and all we can do is to wait for the natural results of man's early ignorance and present lack of care. A warning sign : The Ayles Ice Shelf — about the size of Manhattan — broke clear 16 months ago from the coast of Ellesmere Island, about 500 miles south of the North Pole in the Canadian Arctic.
A course we all could take during the next two years is to consider ways to feel reasonably non-dependent on resources which might be affected by environmental disasters. It's a sobering thought that electricity might disappear for long periods, clean water would be in short supply, food and medical supplies might be hard to obtain, motor vehicles and air travel would be subject to severe restriction. We've seen this science fiction-like scenario in films. Attempting to act it out mentally, in relation to our own circumstances, while relaxed and safe within our lives of plenty, might result in feeling more able to deal with such a situation when it arises. A mental fire drill. And we have still time for practice.
Above all, what will be needed are governments who have the strength of will, intelligence and compassion to deal with situations not yet encountered in human history. This is what voters everywhere ought to bear in mind at coming elections.
Pluto in Capricorn will bring a long needed cleansing to our planet. How intense and radical that cleansing is will depend on how bad we have allowed things to become. Each sincere effort to help, even seemingly inconsequential efforts, might assist in lessening the intensity.
Posted by Twilight at Friday, January 12, 2007

I just came upon this from December. Congrats on your blog review from Jude Cowell over at Stars Over Washington:

"...then there's Learning Curve on the Ecliptic which is on a search for Rational Astrology (ah hah! a Saturnian as am I!) and may just veer into current events, art, and travel, among other things."

Thank you VB ! Yes, I happened upon that a couple of days ago via Technorati's lists. I left Jude a message of thanks - hope she got it. You're a very sweet bunch!