Prediction By Photograph ? (no astrology)

As I've remarked before, I suspect that Republican presidential candidate Rick Perry, Governor of Texas, could well be the recipient of help from above - and I do not mean from "Him Upstairs", I mean from "Them Behind the Curtain". If you consider that to be conspiracy theorising, y'all have not been paying attention. 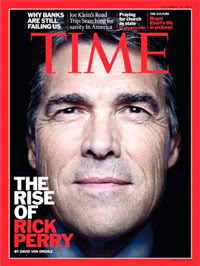 Rockstar photographer, Platon, has done five presidential candidate covers for TIME, three of Obama, one of McCain, and one of Obama and McCain...........assigning someone the likes of Platon to shoot a Perry cover is going to automatically lend a gravity you would otherwise give to someone "just that far away" from the GOP nomination.

Platon (Platon Antoniou), Anglo-Greek born in London in 1968, is a portrait photographer whose subjects have included many presidents and well known world figures.

Taking into consideration the fact that we are more than a year away from the General Election and many months from the Republican primary when a nominee will be chosen.....and there's a line of at least 7 other candidates arguably with equal right to be on TIME's cover......Well, well well, lookee here! A new Chosen One?

"He's got friends in high places,
Where the power abounds
And the money chases his blues away......"

President Perry. Absolutely. Oh please let us all wake up from behind this nightmare.
XO
WWW

Exactly, you said it - the new chosen one. Selected by the Bilderbergs, perhaps? Regardless, selected is the operative word.

I hope, hope, hope we're wrong about this, but things are adding up far too conveniently for my liking.

The late great Molly Ivins referred to him as Ricky "Goodhair" Perry and wouldn't you love to read what she'd write about him if she were still with us? Vile and loathsome come to mind.

I read an interview with Kinky Friedman recently. He ran against Perry for the Texas governorship.
Although he has little or no respect for Perry's policies, he said that the guy does exude a certain charm and that given the chance might manage to become "presidential".