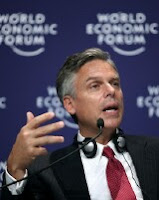 It's an intriguing astrological exercise, though in the end probably pretty futile, to mix and match the Republican 2012 presidential candidates, Prez/Vice Prez-wise. Perry/Bachmann, policy-wise is an easy duo to spot, non-astrologically. I can't imagine the Republican National Committee approving a link-up of two of their farthest-to-the-right, religion-embracing, creationist candidates. Such a link-up would alienate a huge chunk of the moderate conservative electorate.

If Rick Perry were to become the Republican nominee, by dint of his clout from the energy industry, plus a certain amount of personal magnetism, and positive leadership potential, a well-balanced vice-presidential partnership would be with the far more moderate, reasonable and equally personable Jon Huntsman. Huntsman recently stated :"To be clear. I believe in evolution and trust scientists on global warming. Call me crazy." (Some factions certainly will - call him crazy).

On first thought Perry and Huntsman seem to have little or nothing in common, save the "R" behind their names. I think they'd "gel" better than one might expect, albeit with some areas of potential conflict. Look at their charts in this bi-wheel. Perry's at centre, Huntsman's in the outer wheel: 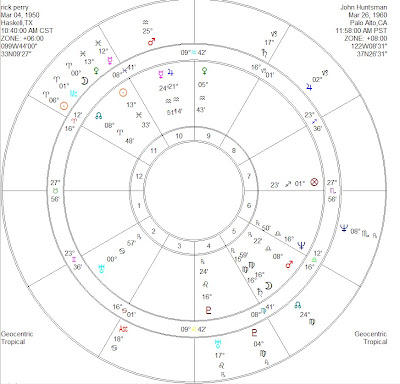 Perry's Mercury/Jupiter in Aquarius conjoin Huntsman's Mars in Aquarius - a possible area of conflict of ideas.....as is Perry's Mars at 8 Libra opposing Huntsman's Sun at 6 Aries.

Perry has Taurus rising, Huntsman's rising sign is Cancer: not incompatible, Huntsman being the more sensitive and intuitive of the pair; Perry more muscular in build and temperament - you can even see that in their faces and build!

Interesting balance of compatibility and potential conflict - which would be stronger though?
Posted by Twilight at Tuesday, September 13, 2011

GP: Hi Neo-Nostradamus! Thought that America would be ripe for a woman Prez. or at least Vice-P.

You took Bachman off the list. If Perry becomes candidate, I understand he would be free to pick an yet unannounced or even so far unknown women VP candidate.

But to go without a women into the race appears not intelligent at this stage.

Yes, I think he'd be entitled pick someone outside of the gaggle of would-be nominees. I'm not well enough informed about possibilities other than Ms Palin, who is in the same category as Bachmann - too far right and too whacky for the moderate element in the R's electorate.

I really only offered up Perry/Huntsman as an exercise because I really do think they'd rub along quite well, in spite of differences and their "styles", together, span the gamut of Republican thought patterns (which may be as foregin to me as the Mandarin Huntsman can speak fluently). What do I know???

There's a long way to go yet, too. Perry isn't assured of the nomination, though I have a funny feeling about him. I despise most of his stances, yet can see how he could win over a lot of waverers by his apparent strength of personality, bearing in mind the comparative weak-kneed showing by the current incumbent.

Coming months will be interesting to watch. :-)

I cease to be astounded and appalled by USian politics, it is a joke that went sour with the first term of Bush the Lesser.
I shrug at the thought of Perry winning. It is totally inevitable.
XO
WWW

Wisewebwoman ~~~ I think it's highly likely, unless O gets his mojo back, which is highly UNlikely, because now we know his is not a real mojo, just a pretend mojo. ;-)