The Muckrakers & Their Astrology

I think this post from April 2010 could stand a re-airing: 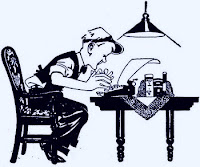 Once upon a time, around the first decade of the 20th century, the USA had a group of writers upon whom the then president, Theodore Roosevelt, bestowed the name "Muckrakers", a term borrowed from literature (John Bunyan's The Pilgrim's Progress). The president could, it seems, see both advantage and disadvantage to the work of these dedicated writers who sought to expose growing social injustice in their country, as it began to flourish and become ever more industrialised.

"Now, it is very necessary that we should not flinch from seeing what is vile and debasing. There is filth on the floor, and it must be scraped up with the muck rake; and there are times and places where this service is the most needed of all the services that can be performed. But the man who never does anything else, who never thinks or speaks or writes, save of his feats with the muck rake, speedily becomes, not a help but one of the most potent forces for evil.... The effort to make financial or political profit out of the destruction of character can only result in calamity."– Theodore Roosevelt, "The Man with the Muck Rake" speech, 14 April 1906

.....these journalists, through their research and constant exposure of the wrongdoing by officials in American public life, gave fuel to protests that led to investigations and later on reform of not only Corporate America but the American Government. The Muckrakers’ journalistic efforts helped reform and regulate Wall Street and aspects of big businesses. The muckrakers also shed light on an array of social issues, such as the issues with urban housing and horrible living conditions in highly populated cities, medical patents, child labor laws, child prostitution, and even women’s rights.

Upton Sinclair lived among Chicago stockyard workers for several weeks researching his novel The Jungle. He aimed to expose dangerous working conditions in the meatpacking houses. Americans, though, seemed more concerned with the disgusting revelations about how meat was processed than by the conditions under which their fellow-countrymen were forced to work. "I aimed at the public's heart, and by accident I hit it in the stomach," Sinclair wrote. The Pure Food and Drugs Act was a direct result of his efforts.

Samuel Hopkins Adams revealed fraudulent claims and endorsements of patent medicines in America. His articles revealed many false claims that pharmaceutical companies and other manufactures made as to the potency of their medicines, drugs and tonics. His work forced a crackdown on a number of other patents and fraudulent schemes of medicinal companies during that time.

Ray Stannard Baker investigated coal mine conditions, a coal strike, and the situation of non-striking workers (or scabs). Many of the non-striking workers had no special training or knowledge in mining, since they were simply farmers looking for work. His investigative work portrayed the dangerous conditions in which these people worked in the mines, and the dangers they faced by union members who did not want them to work. 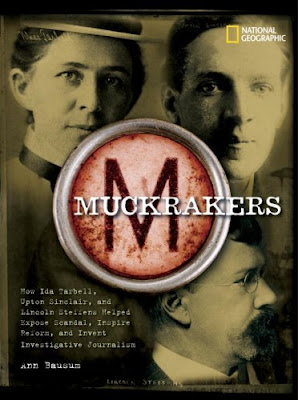 Lincoln Steffens' aim was to expose the pattern of corruption in local and national government, and the real villains, the supposedly respectable, honest businessmen whose bribes and greed fueled the whole system.

John Spargo a transplanted Briton exposed childhood poverty in his book The Bitter Cry of the Children (1906).

Nellie Bly went undercover in a mental institution to report on the reprehensible conditions inmates lived in. Her work sparked some long-needed reforms. In another instance she got herself arrested for theft to reveal the deplorable treatment of female prisoners.

Jacob Riis, a transpalanted Dane used his own photography to illustrate his writing and to indict the slums and tenements of New York. He visited stench-ridden tenements on hot summer nights to experience them at their worst. this work was documented in his book How the Other Half Lives.

Henry Demerest Lloyd's Wealth against Commonwealth & Story of a Great Monopoly, were exposés of corruption related to the railroads and Standard Oil.

Each of those writers deserves their own post (and may well get it in due course!) There were others, too many for a brief blog-post. For now, I'd like to discover whether there were any common factors in the natal charts of this particular group of Muckrakers.

The charts shown below are set for 12 noon. They will not show accurate rising signs or Moon degrees but will be sufficient to show general layout of natal planets. I've copied them in groups which show a particular pattern. (Click on images to enlarge.)

First group of 5: I'll call these the Aries/Taurus Group. These writers had clusters of personal planets close to Pluto (which represents things hidden from view, secrets, the underworld and deep transformation). 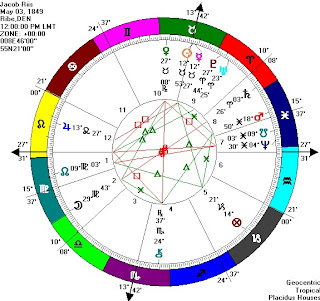 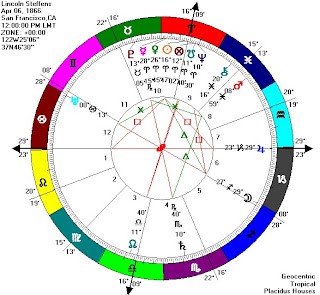 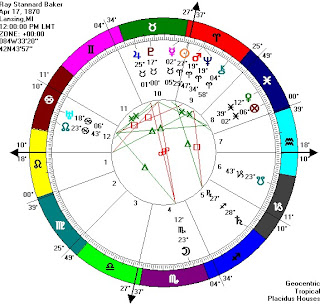 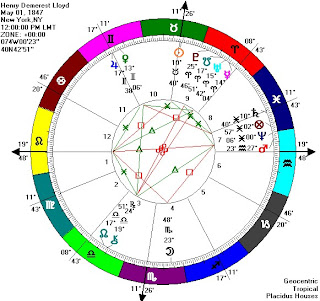 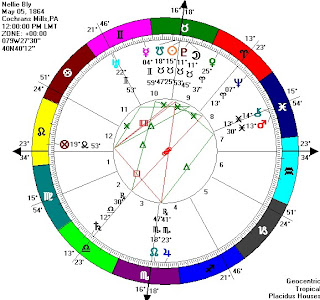 Second group of 2: The Aquarius Group. These have Sun and one or two other personal planets in Aquarius, sign which represents social conscience, forward thinking, and the humanitarian - least surprising of the lot, I'd say. Both have some Aries (the initiator and fighter) input too. 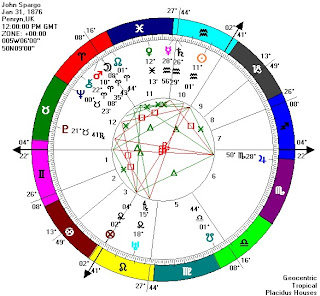 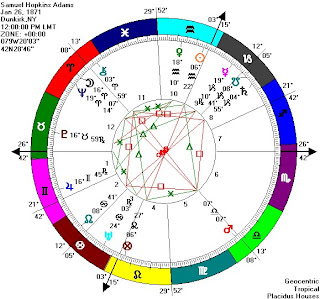 Two others: Ida Tarbell with Sun and Mercury in Scorpio (ruled by Pluto and symbolising secrets, deep incisive mental faculties). Scorpio planets lay in opposition to their ruler and Jupiter, which must have surely added to that Pluto/Scorpio dynamic.

Upton Sinclair is a bit of an odd-man-out in this line-up (there's always one!). He had 5 planets in Virgo, one of the writer's signs, ruled by Mercury. He also had Sun/Mars harmoniously trining Pluto in Taurus though - which I reckon qualifies him to join this club. 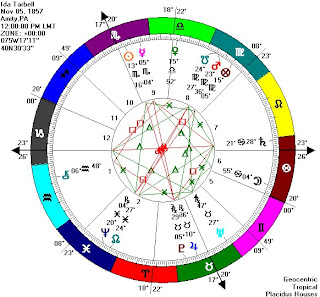 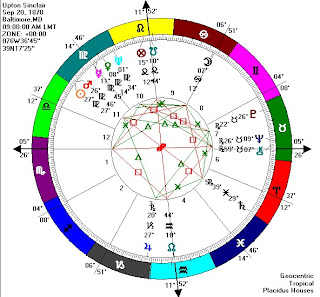 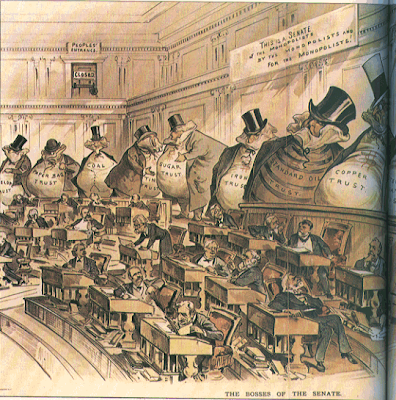 In the 21st century's second decade, would that we could identify a comparable group of writers, unattached to corporate patrons and without ulterior motives.

April 7 2010
R J Adams said...
Where are they when we need them? Or, perhaps, their modern day equivalents still function: Adam Curtis, John Pilger, Michael Moore? Only today, the powerful elite have learned better how to deal with them.


Twilight said...
~~~ Yes, I'd thought of Pilger and Moore (don't remember Curtis, back in the UK though).
I suppose they are the nearest thing we have to Muckrakers nowadays, but their work doesn't have the same effect, and in Moore's case it smacks a bit of money-making and spotlight grabbing for himself. Not quite sure about him.

Corporate power, anyway, is now that much more effective and, as you say, geared up to deal with such would-be trouble-makers.

R J Adams said...
Adam Curtis directed a number of powerful documentaries for the BBC - The Power of Nightmares; Century of the Self; The Trap.....and others.
If you haven't seen them, they're well worth a look.

Note: I have since watched YouTube editions of Adam Curtis's Century of The Self -highly recommended!!!

Posted by Twilight at Thursday, September 29, 2011

Ooh! I used that first piece of art once in a "Reporters Wanted" ad for The Banner.

Also noticed a lot of Mars/Neptune flavors, i.e., Mars conjunct/opposite Neptune, quite a few with Neptune in Aries of course, Mars in Pisces, which gives me hope for those placements.

Kaleymorris ~~ Really? I don't recall where I found it, Google image perhaps - or maybe it came up on iClipart (I subscribe there for bits and pieces like that one), then tinker with the colour.
:-)