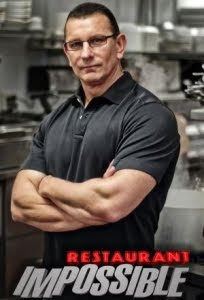 We happened upon the TV show Restaurant Impossible quite accidentally while channel surfing this summer. The British accent of the guy who appeared to be in charge of proceedings interested me, so we watched that show, and a few weekly episodes thereafter. The presenter, a British-born chef, Robert Irvine is, each week, tasked with re-vamping an unsuccessful restaurant whose owners are about to "go under". Reasons range from inexperience, laziness, lack of imagination or just plain bad management.

Chef Irvine has two days and $10,000 with which to re-decorate, re-train, enhance menus, re-advertise etc. This is always a struggle - of course. It wouldn't be an interesting show if all went strictly to plan. The shows do tend to become formulaic after a while. Always there's the last minute panic to get the floor covering down and furniture in place, and to find ways of doing what would normally cost many tens of thousands of dollars for just a fraction of that. He has a couple of helpers on the decorating side, he deals with the catering, menu improvement and training - and often has to demand some very deep cleaning of disgustingly neglected kitchen areas. 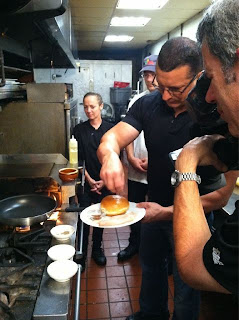 That's something that has rather put me off eating in independently owned establishments. Chain restaurants have their faults, but lack of cleanliness isn't often one of 'em, and though food there can be is predictable, and boring, it's usually reliably edible.

Robert Irvine was a new face to us, but I now find that he has been part of the "food on TV scene" for a while. He has appeared in several foodie shows, Dinner Impossible, for example.

My research indicates that Chef Irvine has not always been 100% truthful about his credentials, having enhanced and embroidered his résumé far beyond generally acceptable self-promotion. In the past he has claimed to have been involved in making Princess Di's wedding cake, to have been awarded a high honor by Queen Elizabeth, worked with US presidents, and other, similar exaggerations, aka lies.
This trait cost him his place on one TV series, when found out, though he was later reinstated, possibly because in spite of his faults he's good at what he does.

He's entertaining to watch - a cross between a pitbull and a cuddly bear. Ex-navy, arms akin to Popeye's, looks as though he spends 12 hours-a-day in the gym, and has the bearing and attitude of an old-time sergeant major. He pulls no punches, minces no words, and can be very, very candid, even hurtful to those he considers need a kick up the rear end. Yet in two shows, featuring elderly restaurant owners who were likely to lose their retirement savings along with their restaurants if things didn't improve, his attitude changed dramatically. I believe he even had tears in his eyes in one case. So he ain't all bad - like the rest of us - he has his moments. He's what my husband calls "a flim-flam man". 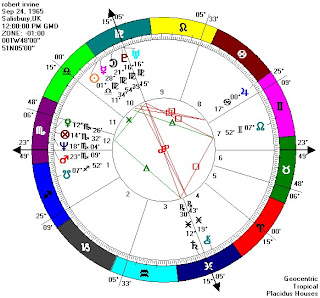 Taking a look at his natal chart (set for 12 noon as time of birth isn't known): Wikipedia has his birth date as 24 September 1965; "raised in Wiltshire", born Salisbury, Wiltshire. Yet his accent is not of Wiltshire. One of my grandfathers came from near Salisbury, Wiltshire. He never lost his accent, which was much different from our East Yorkshire tones. I reckon Chef Irvine's accent is more Salford than Salisbury. Maybe life in the navy rubbed the Wiltshire out of him. He now lives in New Jersey with his wife and two daughers.

Sun in first degree of Libra and Mercury in very late Virgo - though in different signs these are conjoined - so his core self and his mental processes are a blend of Libran diplomacy and Virgo's perfectionism and tendency to criticise, with Virgo looking to be the stronger element; stronger because Moon was certainly somewhere from mid to late Virgo, with Pluto conjunct Uranus also in that sign. His need for perfection comes out clearly in Restaurant Impossible, and in his cooking and presentation skills too. But his penchant for embroidering the truth? That's hardly a perfectionist's trait. Let's see. Jupiter is where I'd pin exaggeration, and Jupiter was in square (challenging) aspect to Sun/Mercury - that fits! Jupiter's love of exaggeration challenges Libran tact and Virgoan critical perfectionism.

Saturn in Pisces is in harmonious trine to Venus in Scorpio - I interpret that as "tough love" - which is what he gives the restaurant owners and their staff in Restaurant Impossible.

T: Do you know what I find most lacking in this makeover shows (and bear in mind I don't own a teevee!) is that there is never a followup. I would want to see the restaurant 1 or 2 years down the road, or the madeover house of the hoarder 2 years on....
That would surely be the reality.
XO
WWW

I think he's a flim flam man. And once a con artist, always a con artist. He will eventually pull another scheme. This sort of person just can't help but stretch the truth. I'll wait.

Wisewebwoman ~ Yes, agreed. This prog does give a 3 or 4 month report at the end of each show. Most restaurants continue to have better results. I remember one from the set we've seen, though, which continued to go downhill and closed.

anyjazz ~~~ Yer a hard man, anyjazz! ;-)
I'd have to know him better to come to that conclusion.

The key is that he's not flim-flam in his skills, or he would never have got this far. He's good at what he does, and simply over-promoting himself. We have a guy in charge of this country who did the same thing - and is not particularly good at what he does.
Think on that!!