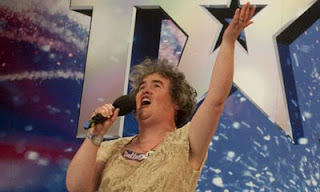 I'm back. So, what did I miss? The never-ending Susan Boyle razzamatazz springs immediately to mind. I didn't really miss it though. How could I? Each time I switched on the TV in the several motels where we hung our hats last week, in New Mexico, Arizona, Texas - there she was!

It's quite obvious to me, now, that the whole thing, this side of the Atlantic, is a huge set-up. Probably being used as a prelude and "come-on" for the new season of America's Got Talent, due in the near future.

That is not to detract from the fact that Susan Boyle has a lovely voice. But then, so have thousands, perhaps millions of ordinary women (and men) across this and other lands. Susan is the one who has drawn the short straw. I say "short straw" because, now, I fear for her. Lines from one of the musicals, in which I suspect Susan dreams of appearing, keep drumming in my head whenever I see her face on the screen:

[Magaldi:]
Eva beware of the city
It's hungry and cold, can't be controlled, it is mad
Those who are fools are swallowed up whole
And those who are not become what they should not become
Changed, in short, they go bad.

[Eva:]
Bad is good for me
I'm bored, so clean, and so ignored
I've only been predictable, respectable
Birds fly out of here, so why oh why oh why the hell can't I?
I only want variety, of society.....("EVITA")

But - what of the astrology?

Just about everything which could have been said about her chart has already been written by professionals - after that little matter of correct date of birth was cleared up. She's a 1st of April 1961 gal, after all, it seems. Born in Bathgate, West Lothian, Scotland at 9.50am. 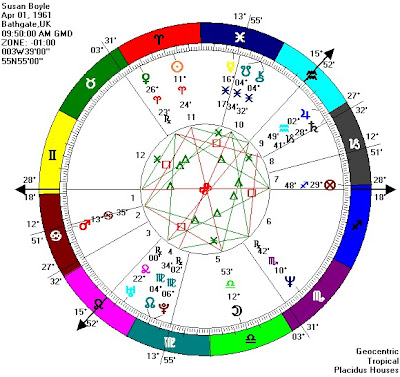 A couple of tidbits which seem particularly pertinent to me, and which I haven't yet noticed mentioned elsewhere, are these:

Susan's natal Mars is at 13.35 Cancer, if birthtime is correct it's in the first degree of her second House of earnings, money and possessions. Sirius (14.05 Cancer), brightest star in our skies is conjunct her Mars.

"Sirius is traditionally described as exhibiting the qualities of both Mars and Jupiter; among other things it awakens the jovian qualities of ambition, pride, fame, leadership, wealth and emotionality, but is also noted for the martial qualities of fires, drought, and danger through impetuosity. "
(Link)

So, perhaps throughout those fairly drab, uneventful, and probably impecunious years, Sirius had a little something stowed away up his sleeve for our Susan!

There's also the matter of her natal Pluto lying conjunct North Node of the Moon, an ultra-sensitive point in any natal chart. I came across the following when reading about Jim Morrison's chart last night, after watching a DVD of "Doors". We'd picked it up in a junk shop on our journey home:

"World-renowned artists often have Pluto powerfully placed in their charts, for the planet also signifies where the potential to influence of the mass of humanity lies within the chart. Amongst its other functions it acts as some sort of collective tap-root. Examples of sixties icons with strong Pluto placements abound; the Beatles all had hard Moon or Mars aspects to Pluto, Beach Boy Brian Wilson has it conjunct his Sun/Moon midpoint, Mick Jagger has Pluto conjunct his Sun and Bob Dylan has Pluto sextile Sun."(Link)

The producers of Britian's Got Talent had obviously been strongly affected by Susan and had sensed the impact she'd have on the general public - especially the American public, well known for tending to be over-emotional and excitable if properly stimulated!

Et voila! We have a phenomenon.

I hope that Susan's Saturn in Capricorn (its own sign) will do its bit in keeping her feet on the ground in coming months and years. Those lyrics from "Evita" keep on drumming in my mind!
Posted by Twilight at Sunday, April 26, 2009

I agree. There are many millions of dollars mixed up in these programs. Too many to have any real surprises lurking in the works. These people know within a gasp or two exactly what will air and what will sell the soap.

It's all very suspicious.

If we watch dumb shows, we shouldn't complain when things get really dumb. And there's not many things on TV that aren't rigged, that's true.

I missed you, Twilight :)

Anyjazz ~~~ True enough ! But most (including us) still fall for their manipulations - at first. As I often have cause to remind you, "To the pure, all things are pure" - at first!
;-)

Ron S. ~~~ Well, yes, but then again I love talent shows, always have - when they are done in the right spirit.
I love American Idol, and if that makes me dumb - so be it. ;-)
Guilty as charged M'lud.

It does take the shine off 'em when suspicions of rigging or manipulation in the cause of $$$$ are aroused though.

Elsaq ~~~ It's sweet of you to say so - thank you - your words are much appreciated. I'd been threatening (to my husband) that I'd not resume blogging once we got home - but my threats dissolved once I sat down at the devil machine again! :-)

Yes, I read a brilliant post about this elsewhere where the premise was that our worlds of grey are being stolen from us and now we are perceiving everything in black and white. Never more so than on these idol shows.
All that aside dear T: welcome back and I hope the trip was all your wee heart desired.
I missed you!
XO
WWW

Welcome back. Hope you're refreshed :-)
Susan has caused a similar media storm over here, too, and I fear for her. She has already got a tabloid nickname - The Hairy Angel.
Sickening.

Welcome Back, Twilight,
We missed you and hope you had a lovely time. The transiting node has a way of making bigger whatever it is contacting at the time, and since it is close to Susan's natal Jupiter, she could become very big indeed, very soon.

WWW ~~~ Hi again! Yes, we had a great time on our trip, thank you.
We got home a day earlier than expected - a good thing because a line of nasty storms followed our exact route through Texas and western Oklahoma yesterday evening. :-)

Black and white, positive and negative do seem to be being made clearer for us these days, now I come to consider the matter. Personally, I tend to see things first in black and white, then talk myself into a variety of greys.

AN ~~~ Thank you! Oh really? I'd thought that perhaps my fellow Brits might have reacted with a little more reserve. ;-) They do seem to be taking their lead from the American way more and more though, becoming more openly emotional about stuff than they used to be in days gone by.

I've just had a look to see where North Node is right now, and it's exactly on Susan's midheaven, so yes, the combination of that and the position it was in as she was born seems to herald BIG, BIG things for her. Whether it will turn out to be "a flash in the pan" or lasting fame and fortune isn't certain though. I tend to hope, for her sake, that it'll be the former, and will bring her just enough extra money to enjoy the rest of her life without worries.

Hi Twilight and welcome back...missed your posts this last week.

Pop over to the blog on realastrologers.com and read Pat's take on the Susan Boyle story. She's picked up on the words of the songs she has sung so far and how that seems to affect people. All about lost love and the wound that can leave. Interesting choice of songs for someone who claims, even jokingly, to have never been kissed.

There have been 2 exceptional child singers on BGT but neither of them has taken off like Susan has. Maybe the words she has sung have hit home without us consciously realising it which is why so many (over 100m) have watched her performance. Something has rung a chord on a deeper level than we may think.

Neptune/Jupiter/Chiron healing the dreams and bringing the aspirations of the world to life maybe? Over the internet (in Aquarius)?

Hi Rossa, and thanks for missing me! :-)

Yes I did see the Real Astrologer's post on Susan and her songs. Those thoughts were in my own mind when the publicity first hit - but over last week I became cynical about it all. Perhaps over-cynical. I don't know.

I feel that the public is being led by market forces - again! Of course, this couldn't happen if the object of it all (Susan) wasn't a good subject. I'm not trying to take anything away from her and her undoubted talent. But I do fear for her in the future if the marketing boys get their fangs into her.

As you say, many women do relate to her song choice, and the bitter-sweetness of the lyrics. We've all dreamed dreams, we've all cried rivers. We've all, those of us of a certain age, longed for someone older but still of today to sing for us. We can't relate totally to the young vocalists in the top 40. Here's someone to whom we CAN relate - and don't those marketing boys know it!!

Susan's Sun/Moon/Mars T square is certainly excitable and shows a lot of natural enthusiasm and volatility, maybe even a certain charisma. The Venus/Saturn square makes her physical appearance somewhat harsh but not without a certain beauty that goes further than skin deep. The Jupiter/Saturn conj. is sort of like a good news/ bad news joke that can bestow a bittersweet quality to life. As the transiting Node conjuncts this aspect it will be interesting to see how her career shakes out. Which face of Saturn will be more apparent? Will she experience mostly the heartbreak and frustration of Saturn or possibly the kinder face which can grant achievement and public acclaim? My guess is that if she has put in the work that Saturn demands, including lots and lots of practice, this contest could turn into something more akin to a coronation in a similar way as American Idol is becoming a coronation of Adam Lambert. As a disclaimer, I'll note that I have never seen this show or heard her sing.

It will, indeed, be interesting to watch how Susan's future unfolds.
She might have aready had her 15 minutes (or a little more) of fame, but I doubt it. The next time she sings, later in May that will be I understand, it'll start up again.

Adam Lambert! Now you're talking!
LOL! He hasn't yet been hawked around the chat shows and newscasts - or at least if he has, I've missed it. I suspect he is well-seasoned in the ways of the world, and of show-biz, after paying his dues for 7 or 8 years in musical theater. I can't wait to see and hear him after Idol has finished and he is let out to give full regin to his talent - crowned or not. :-)

Yes, the only other contestant on Idol with potential star quality is Allison, in my opinion, and she lacks in experience.

Shawn ~~~ I agree. Allison has just turned 17 - she has plenty of time and plenty of talent. I'd like to see her in the final, but Simon seems to want her out. Can't understand why.