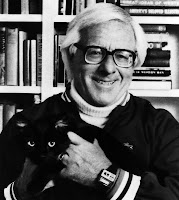 I've just finished reading Ray Bradbury's "Fahrenheit 451". Bradbury is probably the world's most repected science fiction writer. I read many of his short stories in my youth, but hadn't read anything of his for many years until now. When I started the book I was a wee bit irritated by his over-done, highly descriptive passages. My reading eye had been too much exercised by reading journalist news reporting and dry astrology text books! I soon got re-oriented, and began to appreciate and enjoy the difference.

I wondered whether Mr Bradbury's natal chart would reflect his lifelong obsession with fantasy and the future. He was born on 22 August in Waukegan, Illinois, at 4.50pm. 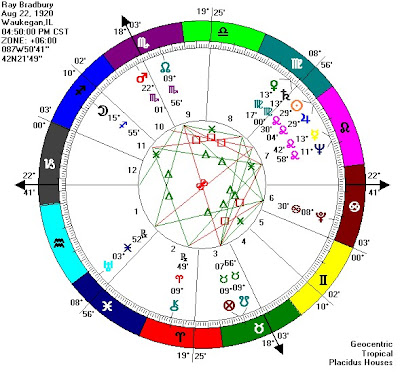 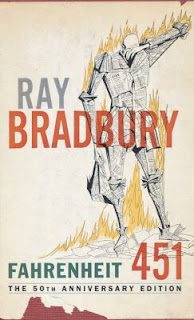 Hmmmm - Well, that's not exactly what I'd expected ! Old fashioned Capricorn rising; future oriented Uranus opposing his Sun and other planets.... Saturn conjunct Venus. But wait - Mercury, the writer's planet is conjunct Neptune (fantasy) and there are 4 planets in Leo - one of the most creative signs in the zodiac. Maybe I should find out a little more about him before I complain!

There's evidence of his attraction to fantasy here, but old fashioned Saturn conjunct Venus planet of the Arts, Capricorn rising, and Uranus (which I'd have thought was the science fiction writer's planet) is opposing his natal Sun.

"Bradbury collects things - books, toys, antiques, auto parts and literally anything that he can get his hands on, all of it going into the bric-a-brac chaos that he calls his office. During lecture tours he has cris-crossed the country by train inasmuch as he never flies, and has never learned to drive a car. Railroad timetables are stacked in his office, suggesting a story to him as does every other item of his odd flea-market of junk. (He declares that he will only ride in a car if he can cower in the back seat.) Perhaps it is his amiable wit as well as his grasp of the fascination of the odd and macabre that makes him so beloved a writer of the genre."

Aha! He might write about the future, but he's stuck in the past himself!

To get more a "feel" for the man, some of his quotes are helpful. These, on the topic of computers, shine even more light on his Capricorn rising and his Uranus-Sun opposition:

Bill Gates and his partners are flimflamming America. (1995)

I don't understand this whole thing about computers and the superhighway. Who wants to be in touch with all of those people? (Brown Daily Herald, March 24, 1995.)

Who do you want to talk to? All those morons who are living across the world somewhere? You don't even want to talk to them at home. (On the topic of Internet chat rooms)

Video games are a waste of time for men with nothing else to do. Real brains don't do that. On occasion? Sure. As relaxation? Great. But not full time -- And a lot of people are doing that. And while they're doing that, I'll go ahead and write another novel. (Salon.com, August 29, 2001)

The current science fiction writers are a bunch of jerks. As for cyberpunk, it's crap -- you can't read it. (Brown Daily Herald, March 24, 1995.)

And - shock horror - his politics!! 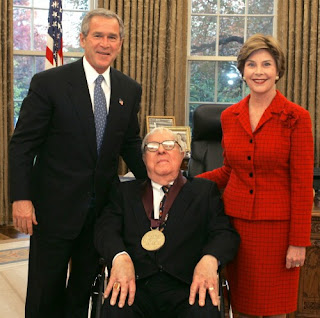 [George W. Bush is] wonderful. We needed him. Clinton is a s***head and we're glad to be rid of him. And I'm not talking about his sexual exploits. I think we have a chance to do something about education.... It doesn't matter who does it -- Democrats or Republicans -- but it's long overdue. (Salon.com, August 29, 2001)

The great thing is our counter-revolution that occurred in the polls a few weeks ago. I think it's great. All the Democrats are out and the Republicans are going to have a chance in a couple of years. It doesn't make a difference what party you belong to--it's a chance for a fresh start. It's very exciting. (Speaking about the "Republican Revolution" of 1994)

If we listened to our intellect we'd never have a love affair. We'd never have a friendship. We'd never go in business because we'd be cynical: "It's gonna go wrong." Or "She's going to hurt me." Or,"I've had a couple of bad love affairs, so therefore . . ." Well, that's nonsense. You're going to miss life. You've got to jump off the cliff all the time and build your wings on the way down.


Stuff your eyes with wonder. Live as if you'd drop dead in ten seconds. See the world. It's more fantastic than any dream made up or paid for in factories.

So, his natal chart does describe him after all! I have a feeling that he and I would not get on, much as I love science fiction, and much as I admire Mr. Bradbury's writing skills. 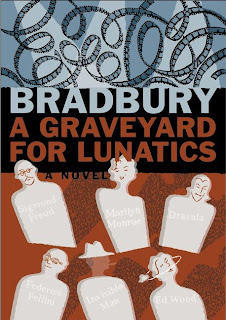 Quotes from
http://www.spaceagecity.com/bradbury/quotes.htm
Posted by Twilight at Thursday, April 09, 2009

Interesting T, I've long been an admirer but this Bush worship is a surprise, I'd long assumed him to be a Dem., judging by writings of his I'd seen on the topic of politics?
Great book tho isn't it?
XO
WWW

I agree with that. He’s an incongruity, I would say. Here’s lovely imagery and vision from an artist that denies the value of such things as computers and internet communication. A valuable lesson is here I suppose. To appreciate art one should try to put aside the personal leanings of the artist.

WWW~~ Yes, I enjoyed the book.
He's an anomaly - somehow he doesn't "get it" that the things he seems to prize in his storylines are not the things he's likely to see manifested by the politics he espouses.

Anyjazz ~~ I know you are a great fan of his writing. I also know that your own politics are very different from his, so yes - fans have to ignore the reality and concentrate on the product. I used to do the same myself with regard to Frank Sinatra when confronted with gossip and bad publicity about him.

My main interest here was not to discredit Ray Bradbury, but to discover if his natal chart fit the reality. It does seem to, though it didn't - before I investigated Bradbury the man, as against Bradbury the writer.
:-)

Ray used to be very liberal - he only became conservative later - maybe it was aging or the stroke. He is very, very Leo. He has huge stuffed lions in his house and a favorite pet cat named Hallie - short for Halloween.

My favourite Sci Fi writer is Philip K Dick, but Bradbury is up there near the top.

Jason's Psyche ~~ Hi there!
Thanks for that additional information. :-)

It seems then that he grew into his chart as he aged! Perhaps as he grew successful and wealthier he began leaning towards conservatism - I guess that can happen.

AN ~~~ I've probably read some of PKD's short stories, but in the past I tended not to keep the authors' names in my memory. Wiki tells me he wrote 'Blade Runner'.

I like sci-fi, but it does tend towards pessimism about the future - I wonder why that is, it would be just as easy to write something hopeful. People (both writers and readers) seem to have a need to be pessimistic.