How Did I Get Here?

That recent question at Plinky Prompts had me digging around in the archives. I'd written a post, some years ago, about what brought me to astrology blogging. I took the long way around - not always the pretty way - but it got me here in the end.

Some of what follows is a condensed post from 2006, my earliest blogging days, brightened with the addition of a few pics, edited and dusted down.

Astrology has played some part in my life for over 50 years. For the greater part of that time my knowledge was sketchy at best. I strained to understand a world beyond Sun signs, but had difficulty accessing information. In my younger years things were very different from now. The Astrology Bandwagon proper had not yet started to roll - no computers, no internet. I lived in England in a small town where the library and book shop carried no books on astrology.

As the 1950s moved into the 60s then the 70s, things began to look up. Hippies, their culture, New Age, and "Hair" the musical with the song "The Age of Aquarius" brought astrology into public focus. By now I'd moved from small town Yorkshire. I puzzled over the fact that my marriage to a Libra Sun person failed dismally, when Aquarius and Libra were thought to be such an excellent match. I started reading more books and any specialised magazines I could find. Nothing I read enabled me to get much beyond Sun sign astrology. I was hampered by my blind-spot in mathematics. Trying to calculate a natal chart from written instructions with nobody to ask for advice was too daunting a task.

In the early 70s, with a new relationship, a stable emotional background, home base in the northern city of Leeds, and a job in the civil service, a new era for me began. Amongst colleagues at work were 3 who shared my interest in astrology, and tarot. At last I had someone with whom to share ideas. 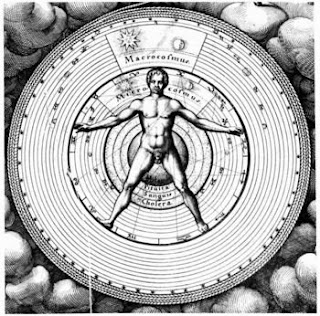 I bought my first astrology report in the early 1970s, from a an advert in an astrology magazine. The report was expensive, and took a long time to arrive. It was produced on a typewriter which had seen better days - uneven type and fading ink upon three foolscap sheets of good quality blue paper. I remember its appearance very clearly, but no longer have it - lost along with all of our possessions in an horrendous fire in 1996. That report gave me my very first information about the other planets in my natal chart. The astrologer estimated, from the vague information I'd provided, that Leo was rising at my birth. I laboured for years under the misapprehension that I had Leo rising. 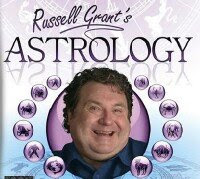 Astrology content in newspapers had increased by this time in both quality and quantity. Russell Grant had a column in the Daily Mirror - a tabloid which my partner insisted on buying because it was the only British left-wing newspaper then, apart from the rather snooty Guardian. In those days Russell Grant was doing well as a leading newspaper astrologer, and I enjoyed his writing.

I don't remember exactly how or when I discovered Jonathan Cainer's column. Perhaps it was in a women's magazine, or a Sunday newspaper. I immediately felt that this was the astrologer to watch. When he took over from Russell Grant at the Daily Mirror I was overjoyed ! He later moved on to the Daily Mail, we moved to the Mail too. 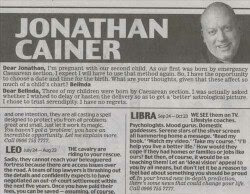 Just why I was so keen on these Sun sign columns, I'm not sure. I knew that there was much more to astrology, yet the newspaper columns presented something to hold on to, something day by day helping to keep astrology alive for me. Perhaps I was holding on instinctively, until I reached the point of being able to discover more for myself.

That point of discovery came with my first home computer, purchased at the end of 2001, and later with the acquisition of astrology software. By then my life had changed. I'd married Himself and moved to live in the USA. Because of everything I'd absorbed, knowingly and unknowingly over 50 years, learning enough to fill the many gaps in my knowledge came with comparative ease, with the help of a brief course, and lots of secondhand astrology books.

That's how I got into astrology. Blogging followed. I'd grown bored of contributing to astrology message boards, and wanted to try my hand at a spot of writing, without expecting many - or any - readers to find my blog. Initially I simply wanted to practice writing about a subject which has always fascinated me, and wrote just to please myself. I still write, primarily, to please myself, but it's a very welcome bonus to know that somebody else reads what I've produced.

It was through the kindness of the (then) small band of existing astrology bloggers that I was gently shepherded in to the group. Jeffrey Kishner, Elsa, April and Barbara all generously welcomed me into the fold. And here I've stayed, aiming to write daily for exercise, experience and discipline. The discipline part must come from Mercury in Capricorn - Aquarius Sun enjoys freedom much too much to be disciplined!

I'll always feel grateful to my blogging colleagues for their early encouragement. Grateful too for readers who pass by, either regularly or accidentally, and find anything of interest here.
Posted by Twilight at Wednesday, April 29, 2009

Thanks for sharing all that T, we get to know you better each day and like what we read. Great blog and your topics are endlessly fascinating, even your Idol addiction! Ha!
XO
WWW

I thought you got into it just so you could be the cutest girl in the room. Had me fooled, didn't you?!

My next word verification here spells out "crock"! I wonder if I'm being critiqued?

WWW ~~~
Thank you kindly! Yes, I'm Idolly addicted for sure. Especially this year with the Glambert leading the pack. :-)

I shall have to give my word verification a good talking to - it can be a very cheeky robot at times.