My old copy of R.H. Naylor's "Home Astrology", around 70 years old, pages yellowing and brittle, is still a source of interest, as part and parcel of the history of popular astrology. I've mentioned the book previously, here. Picking it up last evening, opening it at random seeking inspiration for today's post, I read these words:

"Some people are naturally magnetic, i.e. others are blindly attracted to them. This power of attraction often appears to be entirely independent of physical appeal or character".

Mr. Naylor goes on later to warn that,

" There is no greater enemy of personal magnetism than the modern passion for imitation. The young people of today are so busy trying to model themselves upon their favourite film star, theatrical celebrity or public figure, that they forget to be themselves."

Ah! Mr. Naylor (wherever you are - probably in that great astrology conference in the sky), it was ever thus, and will be for ever more, I suspect!

he says "The real you is quite unlike anybody else, and for just that reason, it is naturally attractive."
Digging deeper into astrology than the Sun Sign, it becomes blindingly obvious how unique - and I do mean unique in its literal sense - each of us is. Nobody else is born in exactly the same place at exactly the second you took your first breath. Not even your twin, if you have one. Every living thing on this Earth is unique. Every dead thing, too, come to think of it. 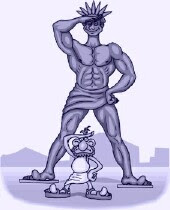 It's hard advice to take, for a young person though - not to imitate others. Imitation is part of how we, as humans, and creatures of the Earth learn. We watch our parents and siblings, and imitate them. Later we read and watch, and imitate when we write our first letter, or draw our first scrawly piece of artwork. Almost every great writer or artist has been inspired by someone else before them. That's just the way life is.

I clearly recall, in my schooldays, trying to copy somebody else's style of handwriting, because my natural style didn't please me. The school mistress fairly quickly recognised what I was up to, and gave me a lecture along the lines of Mr. Naylor's advice. I felt squashed and embarrassed for a while, but little by little I adjusted my handwriting, until, though it did retain whispers of the style I'd so admired, it was different, and solely my own.

What I think Mr. Naylor was really saying is that, however much we admire and wish to emulate another person, we should aim not to be a carbon copy. I guess nowadays that would be better expressed as "photocopy" - carbon paper having long since been re-categorised as "antique". 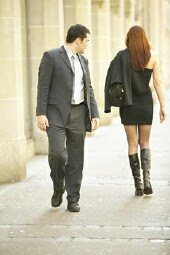 Although each of us is unique, we do have close relationships, astrologically, with many around us. It's not at all surprising that we latch on to a certain style - or a certain smile - attached to someone whose planetary blueprint complements our own. What I find absolutely fascinating is how this can happen without knowing anything about the other person. That's the "magnetism" which Mr. Naylor mentions so often in his book.
Posted by Twilight at Monday, April 27, 2009

In chart comparisons between spouses and immediate family members that share the same living space, I always find strong contacts along the two main axes of the charts. I would guess that your Natal "whatsis" probably is conjunct one of the angles of your husband's chart, and vice-versa.

"to thine own self be true!" was there ever more truth.

Too many carbons out there, and I've been guilty too, until I found my own voice...and style.

This is such good advice. Timeless, age-old advice but still, ultimately, the only thing you really can do to be happy.

It hits a nerve with me because I have a tendency to meld with people. Not so much just imitating them, but maybe it is ... to get close with friends, neighbors, others, I often go along with who/what they are and do. Participate in their activities to have a relationship. Usually, though, it feels like a part of me that I get to express with them. Then in addition to that, my family tends to smooth out the rough edges of where we are different to avoid conflict. We have a complicated history and I think we do this to avoid arguments that could potentially break us apart. But sometimes it's stifling.

It's weird, because I'm actually very unique and many people who know me would not have a clue that I feel this way....

Shawn ~~~ Well now - this is a link I hadn't noticed before, but my husband's descendant angle is just a degree away from my natal Sun's degree. We both have Aries at mid-heaven natally (7 degrees difference). He has Leo rising though, and I have Cancer rising natally, Aquarius re-located.
The most significant link in our charts, I think, is his North Node of the Moon right on my natal Venus.
:-)

WWW ~~~ Yes, it's part of growing up, I doubt there's anyone around who hasn't copied somebody at some time in their life.

That other old saying is important too - "Imitation is the sincerest form of flattery".

I think it's a very natural thing to "meld", as you put it. It's a kind of grace or courtesy. We all have facets to our personality which shine in some circumstances and remain hidden in others. I know I have.

My late partner often used to tell me that I was different when I was around my (also late) parents.
I don't think it was a matter of imitating, I thought of it as not wanting them to feel I was different from them - though in some ways I was, of course, very different.

I can relate to what you describe!
:-)

In searching these links between the two of you, I would expect to find more contacts between your husbands horoscope and your relocated angles rather than your birth angles. I would expect your relocated chart to be more helpful, in general, than your birth chart. Your natal Sun to his DC would have a profound effect on your consciousness, especially as it relates to 7th house issues of relationship and such.
His Node to your Venus is a lovely contact that results in making you feel like a WOMAN in the most enjoyable sorts of ways. Your Venus to his Node widens his circle of friends and associations and implies a certain fated quality to your union.

Shawn ~~~ I'm never quite sure about re-location and astrology.

In our case (husband and self), our first contact was on-line, when we were both in our normal environment. My husband later spent around a year in my (British) environment, before I moved to the USA. So it's a bit different from a scenario where, for example, a British woman living in the US meets a US guy there, and marries him.

I think my natal chart is the most important, for me, because I was already quite advanced age-wise when I re-located. Perhaps a younger person, in their 20s, would morph more completely into the re-location in time.

I don't know - it's a moot point. Re-location is something which could stand a lot more research. I tend to think that the blueprint at our birth remains valid wherever we go, but re-location can highlight things which had formerly been in shadow - kind of! :-)