Patriotism, British astrologer C.E.O. Carter told us, in his Enclyclopedia of Psychological Astrology, is "a Cancerian trait and most patriots have this sign prominent". I'm not sure that works for me - I have natal Cancer rising, but don't consider myself patriotic, except with regard to the Earth as my home.

Mr. Carter went on to say

"But many who are so called, and who perhaps have even performed deeds of great value to their country, have been actuated by such motives as duty (Saturn), resistance to aggression (Mars) or love of freedom (Jupiter or Uranus). Astrology enables true patriotism to be detected, and at the same time, although few national horoscopes are obtainable, it may usually be judged that a person who has many planets strong in a certain sign will do well for himself when in a country ruled by that sign, and, in turn, may benefit the country."

A variety of astrological charts are used by astrologers to represent the birth of the USA, rising signs differ, but Sun in the sign of Cancer is a common factor. I'm not a fan of astrological charts for countries. I feel that a chart set up for an inanimate entity describes a moment in time - nothing more, a moment whose "imprint" has no flesh and blood upon which to imprint itself (except of course upon babies born at that precise moment). I'm not a professional astrologer though, and could be wrong. Assuming that I am wrong, if the USA's Sun sign is Cancer, and C.E.O Carter was right about the sign of Cancer being related to patriotism, then it's hardly surprising that the USA has always inspired its citizens with great patriotism.

What worries me, as a comparative newcomer, though now a naturalized US citizen, is that a good proportion of people in the USA can see no wrong in their country, or its political system, its militarism, the decisions of its Supreme Court, and interpretation of the Constitution. They see their own attitudes as patriotism, and anyone disagreeing or questioning these things as "unpatriotic".

C.E.O. Carter's assessment of patriotism may have been correct for his own time, and for his own country (Britain). We now live in different times, are considering a different country, with different needs. I'd say the astrological signature for patriotism nowadays would have to include some good Mercury and/or Virgo aspects to enable clear, critical thinking, and a little bit of forward-looking Uranus/Aquarius to enable us as citizens of the world, rather than of any particular country. Oh - and what about compassion? Now that's an element of which this country, and its administration, and the opposition, are in serious need right now. Compassion has been thrown out in exchange for wealth, greed and "I'm not prepared to pay for "their" health care, "their kids" education, or to put out a fire when "their home is burning down, because they didn't PAY!"

I wish America could see itself as part of the wider world instead of a large self-contained world of its own - best of all worlds, which can do no wrong. The plea "God Bless America", to my ears is all wrong! "God Bless the World" is the way forward now, the only way, in fact. If the sensation or emotion we call patriotism were to be be re-jigged, re-aligned to encompass the planet and all its peoples, we might see a flicker of hope for the future of this sad and sick old world. 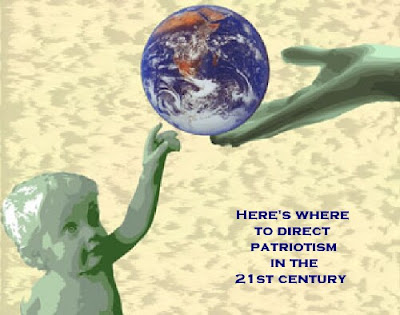 "I have no country to fight for; my country is the earth, and I am a citizen of the world." (Eugene V. Debs)

(Above is a lightly edited and updated version of a post first published in 2007. "Plus ça change, plus c'est la même chose")

anyjazz said...
Whether it is called "Patriotism" or something else, it seems there must be some common thread that holds a nation or macro community together. Whether it is a common goal, a common pride or a common defense, there is a place for some element to create a bond.

In a country the size of America, "patriotism" seems the simplest way to give people a common thread. There are simply too many religions, cults, languages, customs, races, climates and cultures in America to find much of a common thread in any of these. There must be some bonding thread. In times of national crisis, there must be something that sets a people together as an entity. Humans as a whole seem to function best when there is a strength and unity of numbers.

Abraham Lincoln who was most fearful of some states separating from the Union said, "A house divided against itself cannot stand." But Mr. Lincoln makes no allusion to blindly following the current leadership. He speaks of cultivating and maintaining a common bond that will sustain a nation. Current leadership appears to say the opposite with phrasing like "if you are not with me you are against me."

Today, easily accessible transportation and communication have drawn close the people of once distant countries. Nations must become neighbors with a common thread of world patriotism.

Twilight said...
Yes, Anyjazz, I appreciate your point about a vast country like the USA needing some sense of community. What I find worrying is the inability by some elments of society to see any wrong in what goes on in their country or in their name. The "my country right or wrong" attitude. What they see as loyalty is just lack of critical thinking in my book.I agree 100% with your last paragraph.

The Next President of The United States said...
As with so many statements people quote as support for the argument, "my country right or wrong" is only part of the content from the original quote by Carl Schurz, who was a German revolutionary, a Union Army general in the Civil War, a Sec. of the Interior after the war and a 19th century reformer.

The full quote: "Our country right or wrong. When right, to be kept right; when wrong, to be put right." Kinda puts a different slant on image the super-patriots like to conjure up, doesn't it? Schurz is actually an interesting fellow, whose thoughts on Americanism aren't anything like those of some who constantly misuse his quote.

Twilight said...
I didn't know that - thanks TNPOTUS. The sad thing is though, even if 'they' managed to quote the whole quotation accurately, 'they' still wouldn't recognise if and when their country was "in the wrong". Blind, blinkered and brainwashed - I doubt there's any cure for it. :-(

WISEWEBWOMAN ~~ Yopur comment somehow published itself on the 2007 post, WWW, so I'll copy it here, where I think you intended to put it. :-)

Funny this, T.
When I hear "God Bless America" I think of "Zeig Heil!"
It is so insular, so "I'm alright, Jack!" when it so clearly isn't to outsiders. I don't see God blessing America or anywhere else for that matter.
XO
WWW

Agreed WWW ! In the UK the national anthem pleads "God save our gracious queen/king" etc, but the Prime Minister and politicians there don't ever, to my knowledge, end their speeches with "God Bless Britain". TSK!....We "elect" presidents and PMs to "bless" their countries with their great wisdom, comapssion and experience (sarcasm here). Some chance!!!

I have little to add. WWW and I feel the same way when we hear, "God Bless America". In the present climate it sends chills through my bones.

RJ Adams ~~~ Well I can understand your sentiments, RJ and WWW.

I don't get chills I get f...in' mad and want to throw things.

I believed that "God Save the Queen" has a verse about rebellious Scots, which should have been deleted when England and Scotland joined forces but which mysteriously remained.

However, wikipedia says that version is not used any more.

So I will believe their very long version of the tale.

Ah yes! Thanks for reminding me.
I've always preferred "Land of Hope & Glory" to the National Anthem - although even that's a bit imperialistic ("wider still and wider" etc...) I got a surprise when attending graduations of my husbands grandsons to hear the same Elgar's music played as part of the occasion - apparently it's a tradition - though different lyrics, of course.