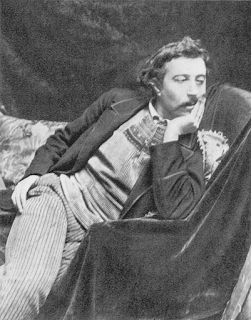 Paul Gauguin. It's not easy to get a clear picture of the kind of man he truly was. Do we believe his own version of his life's events, or is English novelist Somerset Maugham's version in The Moon and Sixpence, based on Gauguin's life, with name and nationality changes, nearer the mark? Doubtful. What about the various dramas or movies about his life, eg: The Savage starring David Carradine as Gauguin and Lynn Redgrave as his wife (below) - sadly, both left us much too soon. 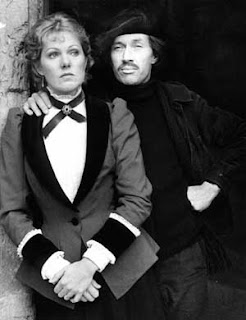 
Until now, the received opinion has been that Gauguin's wife was a bullying harridan who chased her husband from the family home. But Mathews has discovered letters that prove that Matte Gad was in fact a kind, clever woman who was victimised physically, verbally and emotionally by her husband.

'He portrayed the natives as living only to sing and to make love,' said Mathews. That's how he got the money from his friends and raised the public's interest in his adventure. But, of course, he knew the truth, which was that Tahiti was an unremarkable island with an international, Westernised community.'
'I stand at the edge of the abyss, yet I do not fall in,' Gauguin wrote to a friend on the eve of his departure.

'The island [and the realities of Gauguin's life there] are virtually unrecognisable in his representations, carefully calculated to intrigue the French audience,' said Mathews.

In an article from the UK's Telegraph newspaper : Is it wrong to admire Paul Gauguin's art? He changed painting for ever, but Paul Gauguin’s despicable lifestyle presents a challenge to our appreciation of his greatness, says Alastair Smart . Clip from article follows: 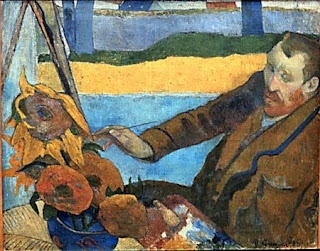 Gauguin had never been a stranger to mythologising, of course. Part of our perception of Van Gogh as a mad, tortured genius stems from Gauguin’s tales of their troubled weeks together in Arles – most notably that of the Dutchman “charging at” him menacingly, “razor in hand”. And Gauguin was a fine self-mythologiser, too. As a self-portrait such as 1889’s Christ in the Garden of Olives exemplifies, he even embraced the role of Christ: martyr for a better type of art that no one else grasped.
(Gauguin's portrait of Van Gogh, above.)

So, was he a fraud? The romantic in me likes to think not. Besides, moving for good to a hut halfway around the world isn’t really the sort of thing you do lightly. If he was deceiving anyone with his idyllic island pictures, it was most probably himself. To Gauguin’s disbelief, Tahiti wasn’t the “august land” he claimed or had expected – there were too many French missionaries for that.

In some paintings, one senses another dark truth surfacing, too: that however hard he tried to “go native”, Gauguin always felt like an outsider, unable to share in the islanders’ profound mysteries. Consider The Ancestors of Tehamana, a portrait of his wife, wearing a high-necked missionary dress (see below), Tehamana sits in front of a frieze that depicts the alien combination of a Buddhist idol, indecipherable glyphs and two evil spirits. She smiles at us, sort of, with all the enigma of a Polynesian Mona Lisa. Beneath the Westernised clothing, and in all but the sexual sense, it seems Gauguin found her impenetrable. 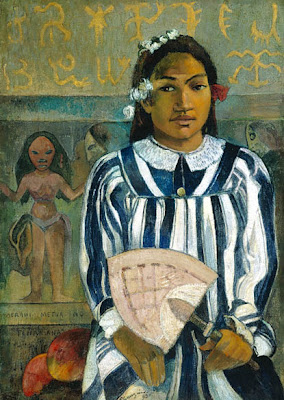 Writers of any era tend to favour the dramatic and sensational over less interesting (and less likely to lure potential book-buyers) middle-of-the-road version. I'd guess that there's a little bit of truth in all of the above versions, and in other commentary about Gauguin - but none is likely to totally describe the man.

Let's have a look at his natal chart (data from Astrodatabank) and see whether astrology's microscope can detect anything helpful.
Born on 7 June 1848 in Paris, France at 10:00 AM
He unsuccessfully attempted suicide in January 1898; died in poverty, May 8, 1903 in the Marquesas Islands, French Polynesia. 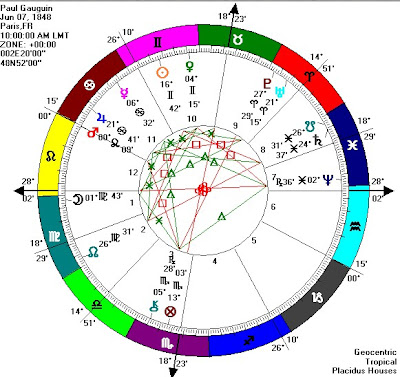 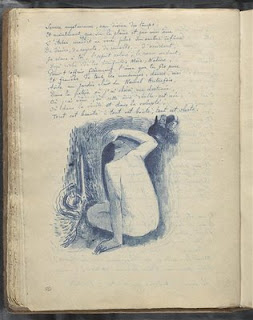 I have a theory. I don't think that art was Gauguin's best, or optimum life path. He began as a Paris stockbroker and "hobby painter", kind of fell into painting full-time, mixing with, and no doubt encouraged by, some now famous contemporaries of the Paris art world.

Yet I suspect he was, by nature, a writer. His father, Clovis, had been a journalist, Paul possibly inherited some of his talent. He wrote, as well as being a painter, sculptor and artist of other genres. Journals, now turned into books, and a magazine of sorts are among his written work: Noa Noa, the Tahitian Journal; Gauguin's Intimate Journals and The Writings of a Savage. He also founded his own periodical Le Sourire.

Sun and Venus in Gemini, Moon in Virgo - both signs ruled by Mercury, planet of communication. While painting is one form of communication, someone with such a clear input of "Mercury-power" might feel more fulfilled with pen, rather than brush in hand. This is theory only!

What I see as most significant in his natal chart is the oppostion between Moon (inner self) in strict and discerning Virgo and Neptune(creativity) in sign of its own rulership: gentle,dreamy Pisces. This opposition is in a very strong position, close to the ascendant/descendant angles, strongest position in a natal chart. It indicates an ongoing conflict in his nature. 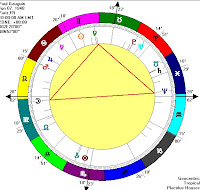 The Moon/Neptune opposition opposition is linked by two challenging square aspects to Venus (planet of the arts) in Gemini, forming what astrologers term "a T-square", triangular formation interpreted (here) as:


"a difficult combination of aspects as it indicates the need to overcome many obstacles, but at the same time, it produces a strong driving ambition to do so. The tension and awareness created by two planets in opposition must be resolved by the planet receiving the double square. This third planet (Venus in Gauguin's case) becomes a focal point of much importance in your chart......If the T square is made up of planets in Mutable signs (as in Gauguin's chart): You tend to get emerged in criticism, ideals, and values. You are likely to consider it important to show your individuality and avoid merely following the leader and trend of the times."

Venus (planet of the arts) provided a potential outlet for Gauguin's inner conflicts. So it seems that Gauguin was doing much the same as Frida Kahlo (See last Friday's post): releasing tensions and angst through his painting. From his restless lifestyle, much of it in voluntary exile from his homeland, I think he did indeed suffer inner conflicts, which drove him to a "path less travelled", and a lifestyle few have experienced. 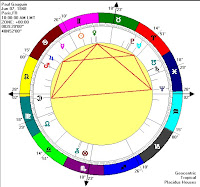 The T-squre in Gauguin's chart isn't a simple T-squre. There's another layer of confliction and challenge linked to it, by a chain of semi-square aspects, and a square between Jupiter (travel) and Uranus (change, rebellion) forming a complex "inset T-square". So challenge piled upon challenge for the artist. It's not surprising that he felt the need to "run away to a desert island"!

Not easily put off from my theory though - I still wonder whether writing would have been a better, more fulfilling, releasing and, in his lifetime, more profitable outlet. As a writer or journalist he maybe would not have had to die in poverty. As for many of his era, his fame came posthumously.


Day of the Gods 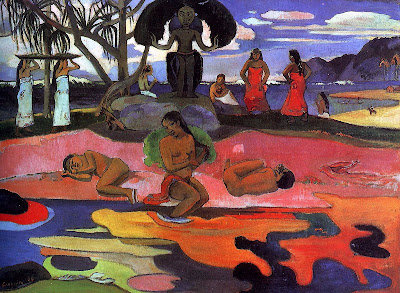 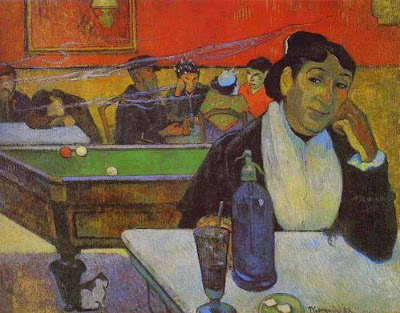 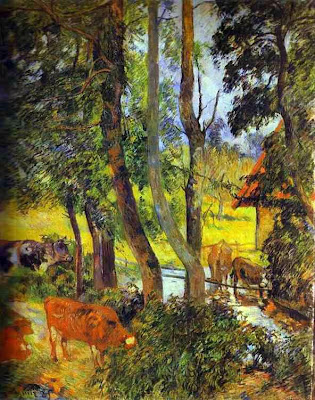 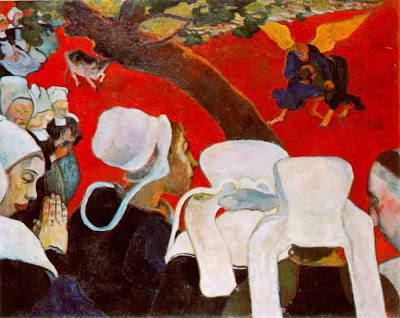 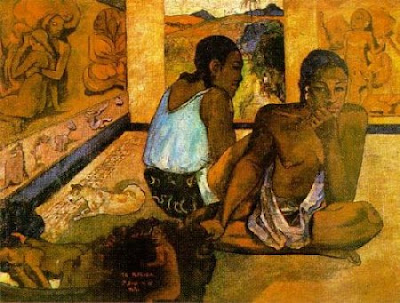 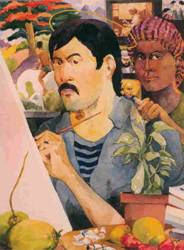 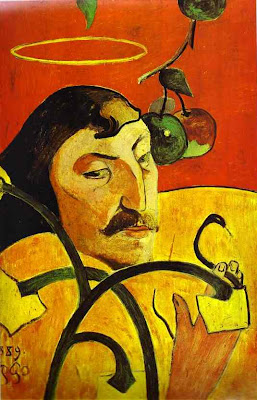 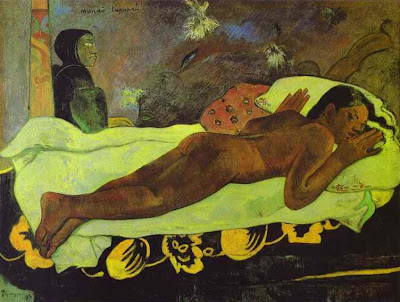 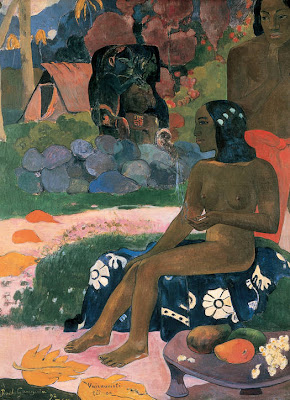 Life's Questions: Where do we come from? What are we? Where are we going? 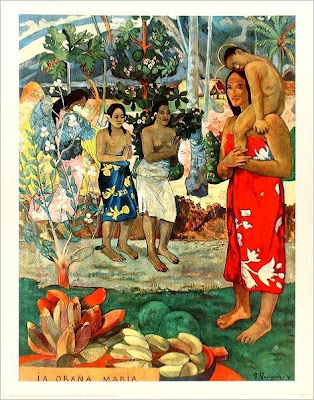 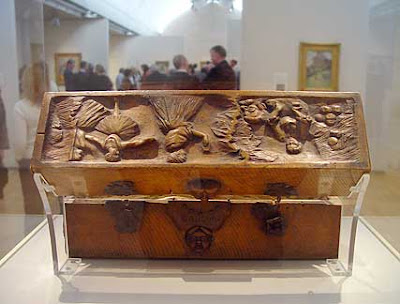 To Be In Love 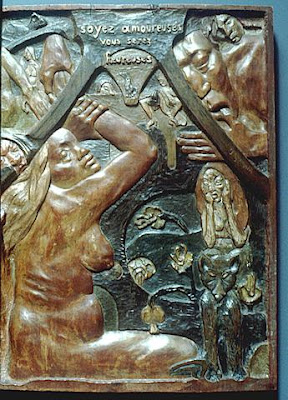 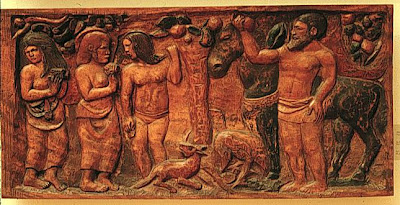 Hi Twilight:
Loved this fresh perspective on Gauguin! Who knows how his life would have turned out if he had chosen the writing path instead of the art's path. However I keep wondering if he had really a choice considering his T-square. My understanding of T-Square is slightly different than yours.I learned that the resolution of a T-square is to be found on the opposite point of the planet that is receiving the double square. In this case, the opposite relief point for Venus would be the 5th house in Sagittarius. This could explain his need to travel. The ruler of the 5th house, Jupiter being in Cancer speaks to me more of visual artist than a writer. Maybe because of the combination of a fire planet (Jupiter) in a water sign (Cancer). Both speak to me of a great need to visually express strong emotions concerning the myths and beliefs in the archetypes carried by Jupiter.
I think for Gauguin, the T-Square spoke of a much stronger impulse towards a visual expression of his artistic talent than his other artistic indicators (Sun, Venus in Gemnini and Moon in Virgo). In my experience, T-Square can overpower other factors in the chart.
In any case, I think you made an excellent point about Gauguin as a possible writer.

Excellent post on Gauguin. What is the truth of him? Like many artists, we'll never really know, but so often, a writer's interpretation of them tends to be half about the subject, and half about validating him in terms of the contemporary.

Astrology Unboxed - Hi Fabienne ~~
I see. Yes, that's another way of interpreting his chart. But I hesitate to include anything that isn't actually present though - like the opposite side of the T-square (and other similar astrological items that are "imagined".) Just me! :-)

Hmmmm - well his impulse to paint and sculpt did overcome other impulses, certainly. How much true fulfillment it brought him isn't clear though - without reading his own words (which I haven't done). An attempt to commit suicide doesn't sound like the act of a fulfilled person though.

As well as the simple T-square all those other challenging aspects - in the inset 'T' - added to his problems, helping to explain a lot astrologically, and complicating his nature more than in the case of someone with a simple T-square present in their chart.
:-)

WWW ~~~ Gauguin has never one of my own favourites, but discovering his carvings/sculptures I found one aspect of his work that I do like a lot.
:-)

anthonynorth ~~~ Yes, good point about biography writing. Then there's the saying that (roughly quoted) we don't see someone as they are but as we are....so each writer will have a different slant, different insight.
:-)