Music Monday ~~ The Flower Duet from Lakmé by Léo Delibes 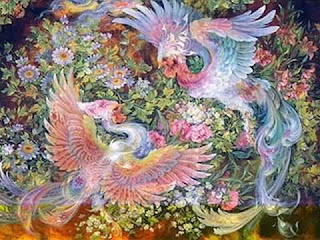 I'm continuing to rummage through classical music, looking for pieces which, due to their inclusion in movies, TV drama, or commercials have found their way into the consciousness of those of us usually not classically inclined - musically that is.

Next up: The Flower Duet from the opera Lakmé written by French composer Léo Delibes in 1883. The theme of Lakmé, is the love of a British officer and the daughter of a Brahmin priest in mid-19th century India. The piece has been included as background music in TV, movies and in advertising . There's long list of such inclusions at the Flower Duet page of Wikipedia, along with a rough English transation of the lyrics.

A sample from the list of movies, etc featuring this music: True Romance, Private Parts, The American President, The Oh in Ohio, Lara Croft Tomb Raider: The Cradle of Life, Meet the Parents, Superman Returns, Five Corners, Someone to Watch Over Me, The Hunger, Carlito's Way, I've Heard the Mermaids Singing, The Mummy: Tomb of the Dragon Emperor. Also often recognised for its use in British Airways TV commercials, from 1989 onwards, and in several Godiva (chocolate) commercials in the USA; and in a few episodes of The Simpsons. The music has been interpreted by popular artists such as (among others) Mike Oldfield, Yanni, LL Cool J and The Rhapsody. In early 2008, 15 year old Australian classical-crossover, soprano Grace Bawden recorded a rendition, using her own English lyrics. 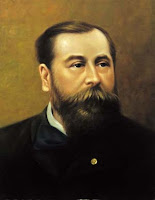 What of Léo Delibes ? Information, other than a bare skeleton of his career and compositions is extremely hard to come by on-line. From the little I've gleaned: he was born Clément Philibert Léo Delibes in Saint-Germain du Val (near La Fleche) France on February 21, 1836. Son of a mailman (who died early in Léo's childhood) and a musical mother, he was also grandson of an opera singer. He studied at the Paris Conservatoire, became accompanist and chorus master for the Théâtre-Lyrique, and later second chorus master at the Paris Opéra. He was also organist at Pierre de Chaillot from 1865 to 1871. In 1871, at age 35, he married Léontine Estelle Denain. In 1881 he became professor of composition at the Paris Conservatoire.

Léo Delibes was the first to write music of high quality for the ballet, opening up a new field for serious composers. His influence can be traced in the work of Tchaikovsky and others who wrote for the dance. His music for Coppélia and Sylvia, are noted as works that moved ballet music a major step forward. 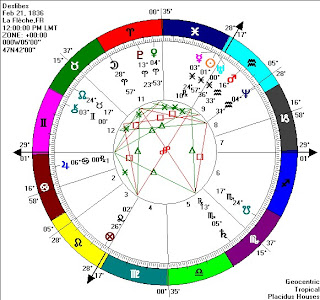 Key here is the stellium (cluster)in gentle, dreamy Pisces linking Sun/Uranus/Mercury; but there's more: Pisces' ruler, creative Neptune links via semi-sextile to the stellium from Aquarius (sign ruled by Uranus, part of the stellium). There's a semi-sextile flanking the stellium from the other side: Venus (planet of the arts) in Aries. All the named planets lie between 0 degrees and 4 degrees of their signs, and blend the characteristics of signs and planets. So we have a blend of: dreamy/emotional/gentle/creative/inventive/new/pioneering/artistry. Moon was almost at the end of Aries at 12 noon, so if Delibes was born later it would have been in Taurus. Either Moon placement would match what we know of him : Aries (pioneer of beautiful ballet music)- Taurus is ruled by Venus, so Moon in early Taurus would form yet another link to his Pisces stellium.

There's yet another link to that stellium to be noted: a Grand Trine (a harmonious circuit) in emotion-driven Water signs linking the Pisces stellium to Jupiter in Cancer and Saturn in Scorpio.

This is a chart filled with gentle emotion spiked by a (still gentle) pioneering spirit.

Examples of how the music has been used during the 20th century and beyond.
First, a classic version:

In a British Airways Commercial

A pretty version by the Modern Mandolin Quartet

And, here the music was used in a promotional video for Nichi Vendola, Italian politician and president of the Apulia region.

NOTE For the next 2 days posts, by Gian Paul and myself will, if things go to plan, be published automatically, via the Blogger scheduling facility. I'll not be around to comment or respond after today, until Wednesday/Thursday.

PPS: Gian Paul reports that he has internet difficulties in Brazil, has not been able to see the blog for some days - so he too might not be able to respond to comments.

Nice music. I hope all goes well for you both on Tuesday. I'm sure it will.

RJAdams ~~~ Thank you RJ, I'm sure all will be well too. I'm an old hand at this stuff, but only back in the UK. This will further my education and experience US-wise. :-)

One of my favourite pieces, T. thanks for the great post as always.
Good luck with everything.
See you soon.
XO
WWW

Thanks for the good wishes. Yes, all went well, without hitch.