IS ISLAM A THREAT ONE SHOULD FEAR? 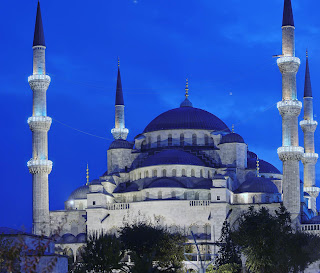 The Arabs, mostly all Muslims, have a close connection with astrology. It's they who brought it back to the Christian world during the Middle Ages, when most of Spain was under their control and the Vatican had banned astrology from being permitted - except, it is reported, for the secret use of some of the Popes. (This, I guess, is one of the reasons the Vatican's Library is hermetically closed to outsiders).
(Illustration (left) = Blue Mosque in Istanbul) 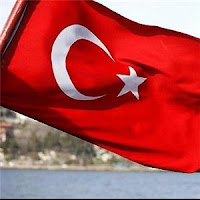 Islam has a precise starting date: July 16, of the year 622. At Sundown (18 hours 44') at Medina. Mohammed had then had to flee from the violent opponents to his ideas in his home town of Mecca ("Prophet in his own land..."). At Medina where he had just arrived, on July 16, after a New Moon 3 days before had just passed, the Moon's crescent was becoming visible in the early night sky. And thus the crescent Moon turned out to be the symbol most Islamic nations carry in their national flags. This was the exact moment when Islam was "born". (Right = Flag of Turkey) 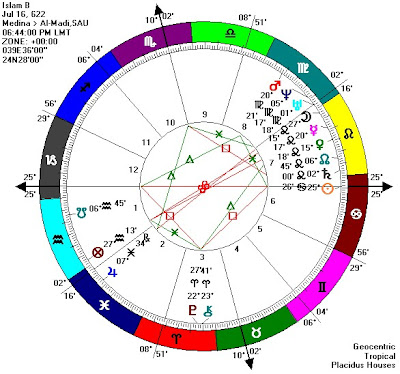 Permitted question: Here we have the first beginning of a major religion where the starting moment is precisely known; are we presented here with an astrological "gift"? (Rather then some obscure manipulation of dates as with the beginnings of Christianity). 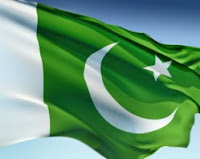 An interpretation of Islam's horoscope is very revealing in terms of what this latest major world-religion represents. A stellium of 3 planets, Moon/Uranus/Neptune, opposed by Jupiter is the main "axis" of this map. Neptune and Uranus, in Virgo, opposite Jupiter in Pisces, the sign and main symbol of the Christian Era! Reinforced by the crescent Moon, a guaranee for a lot of "emotional spark" to develop between these two religions. An almost precise trine between Mars (in Virgo) and Pluto (in Aries) also indicates that if there will be conflict, it will be rather fierce (Mars) and fundamental (Pluto).
(Right = Flag of Pakistan)

Since ever the two religions have been fighting either to conquer the other's lands, or to try to get them back (the Crusades, aiming at taking back Jerusalem and the Holy Lands). The Suez Canal, Oil, and of course, Israel...

Some are intrigued, others proud and grateful that the bulk of the world's oil reserves are found in the Islamic Middle East. Allah's special gift to his followers, they say. Without that, the Arabs would not have been able to take the rest of the world hostage at various not so distant occasions. There were repeated conflicts around oil in the last 50 years, some costly wars in the Middle East, attentats by Al Queida and their allies in the USA, Britain, Iraq, India (Kashmir), Somalia, Yemen etc.

(Below map of Middle East taken from http://www.thedossier.ukonline.co.uk/maps_charts.htm) 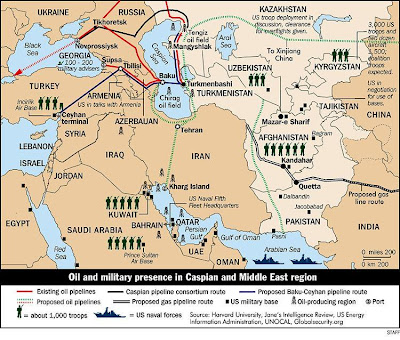 But Islamic militancy also is to be found in behavioral patterns: head-scarfs and Mosques in provocative places, anathemas pronounced against writers (Salman Rushdie) or humorists depicting Mohammad, to cite the most controversial events.

Islam is by no means a united religion. There are the Sunni, the Shiite, the Druze etc. Often secular power and Islam (remember Saddam?), the Iranian Clerics, Khadafi in Libya etc. make particular alliances - and can be strange bedfellows. Oil has tended to unite them - and combined with that the existence of Israel at their doorstep. Or what unites them ideologically is foremost Israel and the equivocal role the Vatican has always been playing in the Orient.

There are however places in the world other then the West which are under much more serious threat of being "islamisized" than we are: the Philippines, much of Africa, part of India, Russia beyond the Urals, China in some sectors. Islam can be said to be a religion of "no fear" and expanding as no other. The Koran promises special rewards to whom dies for its faith. There is a better world promised in the beyond for all Muslims in general and more so even for the martyrs. This, for the simple-minded, stigmatized by some fanatic, can rapidly turn them into suicide-bombers or Taliban-type, fearless fighters. 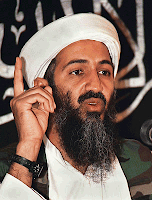 What is going wrong in Afghanistan and Pakistan? Egypt's President Mubarak, a moderate Muslim, said years ago to Bush father and son that military intervention in the Islamic world by the West will never bring any results. Fight (and even catch) Bin Laden (left), another 300 will appear! It's a "Pandora's Box". And Mubarak knows his world. Egypt is under permanent internal threat of Islamic fanatics. So are Pakistan, Indonesia, to mention the most populated.

The problem of the Taliban, extreme "believers and fierce fighters" is that by opposing them they become fiercer. If left alone they will fall back into fighting each other. And so with the Iranians and the Iraqis. Providing the West can stop mixing up oil and "fighting for so-called democracy" (which few Muslims care for), an easier relation between these forces could probably be found.

For this Israel should be convinced (why not by threatening them with the withdrawal of unconditional support?) to play it's full part in de-fusing the powder keg (even nuclear) on which the whole of the Middle East + India/Pakistan are now sitting.

And this once and for all. But as long as Israeli leaders can say in public that the US Government (Obama) is "easy to deal with", this can only help the Muslim fanatics in their argument that the USA is against Islam. Obama knows that, so he tried to establish some bridge in his ill-fated Cairo speech which as an only result earned him a much ridiculed Nobel price. Now exactly one year ago. Any results? It's not words that are needed. It's the West which should leave others alone and, as unfortunately now needed, has to learn to better control its frontiers. (Left: Bust of Golda Meir in New York)

The horoscope of Islam's beginnings is an inescapable fact. It can't be changed. What is possible is to take into consideration the inherent tension points, mentioned at the beginning of this post. And act accordingly, not by "patronizing" as the West is terribly inclined to do with others in this world.
Posted by Twilight at Tuesday, October 12, 2010

Interesting considerations, thank you for having shared ’em with us

Anon ~~~ As Gian Paul is still unable to view or write directly to blogger blogs from his location in Brazil, I copied your comment to him by e-mail and he replied as follows:

In response to Anon: There is a polite but probably contra-productive notion that "one should not discuss other people's religion". As per Twilight's belief that astrology may give us explanations on many
things, I happened to find one surrrounding the tensions we all
live with Islam these days.

I enjoyed this post a lot. It's a topic I haven't ever considered writing about myself, and a very good addition to Learning Curves on the Ecliptic.

I always refuse to enter debates about the middle east (Israel/Palestine) as it usually proves to be "a hiding to nothing".
The conflict has been going on for most of my lifetime and it'll not end anytime soon.

However, other mid-east countries such as Iran, Iraq are a little different. I feel so very sad for these countries, as they are now. Their history is so rich and is actually the cradle of most civilisation. Their people began a quest for knowledge and art that is ongoing still in the West. People (especially in the USA) forget these things all too often.

FROM GIAN PAUL via E-mail:
Twilight, unfortunately we know so little about the past. What
cultural treasures there were in Iraq/Babylon, Ani/Armenia,
Balkh/Turkmenistan etc. And Jerusalem, the Essenes, the Gnostics - its
with no end, or almost. But what we can find, the left traces at
least, possibly "survived" exactly for the purpose to remind us that
our today's civilization is only one of many. Not up to me to say if
it's the best (or the ultimate).