I was beginning to suspect that 2010 must be the Year of the Horse in Chinese astrology, about which I know little to nothing. As it happens, it isn't - it's the Year of the Tiger. Never mind!

The movie Secretariat - tale about a real-life wonder racehorse is doing the rounds in the USA just now. A couple of days after seeing that movie we noticed, on offer on TV, a 1979 movie The Black Stallion, adapted from a novel by Walter Farley. In this film, after many adventures the leading character takes part in a climactic scene, a horse race, very similar to that in Secretariat. Then, several days later we watched our weekly dose of Mentalist (Simon Baker - very drool-worthy) and we were presented with...well whaddya know....an episode about horses with a big race as its climax! Some coordination between the powers-that-be in movies and TV had gone on there I'd wager - a way of whetting appetites!

On a day trip a few weeks ago, before Secretariat and The Black Stallion and the Mentalist episode, I had spied, in an antique store, a large and lovely decorative horsehead, carved in wood and embellished in brass and copper. The store was having a discount sale (aren't stores always having discount sales?) This item had been marked down three times and was on sale at less than half its original price. I noticed he was looking at me with a mournful eye - that puppy-in-pet-shop look . I just had to have him. Later, after seeing Secretariat, I have decided to give my horse a name : Proletariat.

As I bought and named Proletariat when Sun was in Libra, that can act as his Sun sign. There's a fun article, Astrology for Horses by Kim Hann-Devries, HERE. I find that:

The Venusian influence upon the physique of the Libra-sun horse is evident in its natural beauty, balance and poise. (Well I think he's very beautiful!) This horse is also innately outgoing and charming. More than anything, this horse wants to be popular ....Your Libra-sun horse will go out of its way to please you and accommodate all your wishes (Really - really - like a magic lamp?) so it is important that you appreciate this, and treat it fairly and justly.....

Proletariat from both sides, as he guards our entrance. 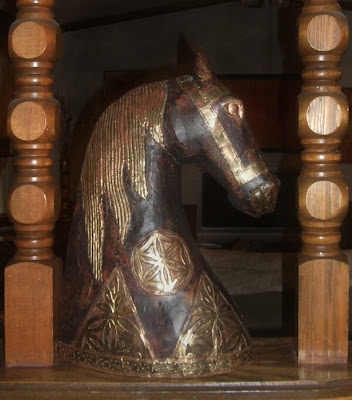 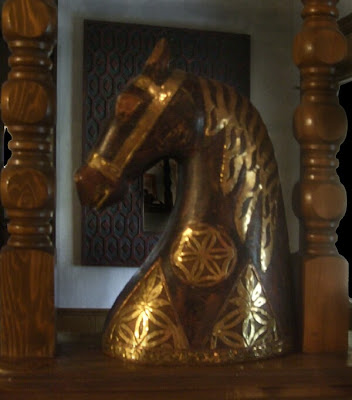 I hear the horse Proletariat is a bit twitchy.

Oh it must be a she, all that glitter, no?
XO
WWW

I am a Monkey. Blogger helpfully told me I was an Earth Monkey, but will only include that in the profile info if it can also include the date of birth. I thought, well, why make life easier for identity thieves and nosy people? Make them do a bit of googling!

RJAdams ~~ How dare you sir!
Such indignity that would be for this handsome animal. ;-)

WWW ~~~ I don't think so, WWW. He's very heavy and solid - so sure of his masculinity that there's no need to be afraid of a little decoration. It make him stand out. I think he has Leo rising! ;-)

Yes, that identity theft is something to be aware of on-line. I'm often surprised to be able to find any birthdates to play with.