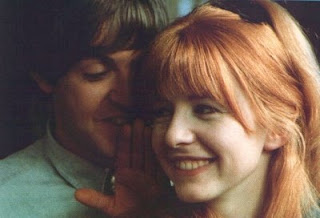 Here's a fairly inconsequential trifle I stumbled across at The Beatles Bible website - "not quite as popular as Jesus". It is noted that on this day 20 July, 42 years ago in 1968, Jane Asher announced to Britain, on BBC TV that her engagement to Paul McCartney was over.


Maybe astrology will show itself here.

In an appearance on the BBC Television show Dee Time, Jane Asher told host Simon Dee that her engagement to Paul McCartney had been called off.
I haven't broken it off, but it is broken off, finished.
I know it sounds corny, but we still see each other and love each other, but it hasn't worked out. Perhaps we'll be childhood sweethearts and meet again and get married when we're about 70.
Jane Asher
Dee Time

I pulled up a chart for 8pm on 20 July 1968, London (centre chart) compared it with Jane Asher's natal chart (outer circle) with detail from Astrodatabank. Ah yes! Jane was inwardly feeling "mad as hell" as transiting Mars (anger) crossed close to her natal Mars and Saturn, and transiting Saturn (limitation) was heading towards her natal Venus (love). 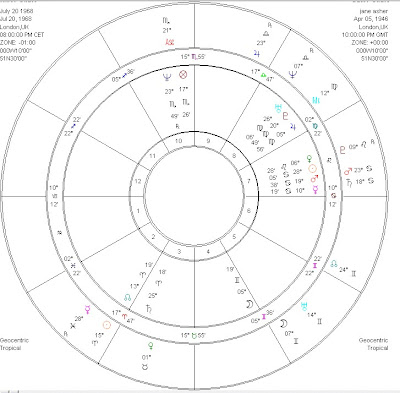 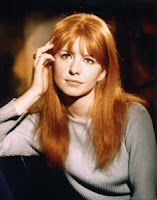 I always feel very wary including Jane in The Beatles; history. She's never gone into print about our relationship, whilst everyone on earth has sold their story. So I'd feel weird being the one to kiss and tell.

We had a good relationship. Even with touring there were enough occasions to keep a reasonable relationship going. To tell the truth, the women at that time got sidelined. Now it would be seen as very chauvinist of us. Then it was like: 'We are four miners who go down the pit. You don't need women down the pit, do you? We won't have women down the pit.' A lot of what we, The Beatles, did was very much in an enclosed scene. Other people found it difficult - even John's wife, Cynthia, found it very difficult - to penetrate the screen that we had around us. As a kind of safety barrier we had a lot of 'in' jokes, little signs, references to music; we had a common bond in that and it was very difficult for any 'outsider' to penetrate. That possibly wasn't good for relationships back then.
Paul McCartney
Anthology

McCartney and Asher had been together for five years, since meeting at the Royal Albert Hall in 1963. However, McCartney had a string of other girls, mainly while The Beatles were touring - and in 1968 began an affair with an American woman, Francie Schwartz. Asher arrived unexpectedly at McCartney's home in Cavendish Avenue, London, where she found him in bed with Schwartz. She walked out and sent her mother to collect her belongings, signalling an end to the relationship.

I think inevitably when I moved to Cavendish Avenue, I realised that she and I weren't really going to be the thing we'd always thought we might be. Once or twice we talked about getting married, and plans were afoot but I don't know, something really made me nervous about the whole thing.............

Now well known as an author, Jane Asher has written three best-selling novels: The Longing, The Question and Losing It. She has also had more than a dozen lifestyle, costuming, and cake decorating books published. Asher runs a company making party cakes and sugar crafts for special occasions, and still acts on television and in the theatre. More at Wikipedia.
Posted by Twilight at Tuesday, July 20, 2010

Jeez, T, I love how you uncover this stuff, I really do!
Of the Beatles I like George the most.
XO
WWW

The "inconsequential trifle", for me personally, made me have a look at my own map, at that time. Even more so that not so long ago I dreamed about Paul McCartney (I am not queer - and I presume he is neighter - but he desired "astrological opinion" from me...)

In July 1968 (it was after Mai '68 in France, the uprising in Chekoslovaquia), I was into my first job, with IBM. "Hell of a hell!" Dark blue dress, white shirt etc.

I had other things in mind (and some money left over from a part time job I had gained at university).

So, I sold my Beatle (car), said good-bye to whom I needed to and took off to Persia "to see the Dervishes". The country then still was under the Shah and so I managed to get arrested while spending the night in a Mosque at the Afghan frontier. They thought I must be an agitator while in fact I was a candid dreamer!

As my money also was coming to an end, and I had serious digestive problems as sometimes happens to tourists, I had to return back to Lausanne.

My transits then were: Saturn (back and forth) on Sun, Uranus on MC/Neptune. Then I landed a job with Burmah-Castrol. And serious life started, I even got married.

WWW ~~~ Well - it keeps me out of other mischief. ;-)
I preferred George to the other 3 too - though to be absolutely honest I didn't take much notice of any of 'em until I came to the USA and found that my husband and in-laws idolise the Beatles.

gian paul ~~~ Dreaming of Paul McCartney eh? LOL! I wonder if he "believes" in astrology. I've not read anything which links the Beatles to an interest in the subject.

Your travels and experiences in 1968 sound adventurous enough for the basis of a book - ever thought of it?

Are you still in the oil industry ?
Any views on the Gulf of Mexico drama ? It is ongoing and could have very scary implications according to some sources (methane bubbles, sea floor collapse, leaks in the seafloor elsewhere, and assorted other goodies - irrespective of the terrible cost to wildlife and sea creatures).
I really need to stop reading about it but it's like watching a train wreck - can't look away!

The Skeptics Dictionary says: "Correlation does not prove causality, but it's good enough for most astrologers".

I recommend the dictionary to anyone. Stimulating to consult. To me correlation is even stronger than causality, it's beyond "visible, logical causality". But go and explain that! I had tried to do so in a book which I ultimately decided not to publish.

To answer your other question: I left the oil industry for asset management, where I spent most of my professional life. But I am still keenly interested in "matters of oil". As I already said, I even made an invention to prevent oil spills which now turns out to be a hard sell. "To complicated and costly" I am being told.

I am waiting presently on the sidelines to see how much the mess in the Gulf is going to cost to be put right again - if ever that's possible.

gian paul ~~ Correlation may not prove causality (whatever one conceives that to be) once - or even twice, but constant correlation of certain factors has to mean something, whether skeptics like it or not. ;-)Pity you didn't publish, gp. Maybe posting excerpts on a blog then???
Blogger is free and easy to handle.

Yes, I recalled you had mentioned oil before, and the invention.

If they ever get as far as the clean-up stage it'll be a miracle, according to some. In this instance, I think we might get away without major national or global catastrophe and keep it contained as a tragedy affecting several states. In future, if they insist on recklessly putting the planet in danger, I can see that deep sea drilling could well be the thing that causes the end of the human race. I hope they come to realise the largely unknown risks they are taking with our lives. :-(

The spill in the Gulf - and many other ones, "brushed under the carpet" (Nigeria, China, probably Brazil etc.) will not be the end to drilling for oil at sea - but "the people" will have to accept to pay the price to do it more safely!

As with so many other things, genetic engineering, agrochemicals, medicaments, one has to think that "God's garden is great and tolerant". But comes a moment where humans become conscious of the damage they cause and should start "to behave". It's step by step...

gian paul ~~~ Wise words, gp!
Step by step has to be the way, but I do hope that longer strides follow soon, because we are, and have been, dragging our feet terribly .