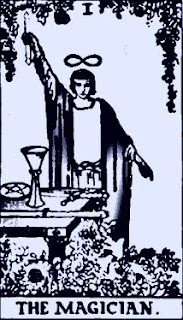 Magick with a k - different from conjurors' magic. Magick aka sorcery resides in the deepest darkest corners of Woo. It's a vast subject, if taken from a global perspective, too vast for a modest blog post. I'll simply skim the surface of Western-type magick and its background.

Astrology may play some part in the supposed workings of magick - the timing of spells or procedures, the preparation of a talisman, for instance. Mediaeval magicians would almost always need some level of astrological knowledge, for them astrology was part and parcel of occult practice. I see it as otherwise - but that's just me.

From relatively modern times, Aleister Crowley is the first name that springs to mind when contemplating magick. The name alone gives me the creeps. A predecessor by several centuries, John Dee, has a much better feel for me. Distance does indeed lend enchantment!

It's well nigh impossible now to get a true feel and understanding of what life was like in John Dee's time and place - 16th century England and Europe. Let's see, what was going on around then? Religious reformation, exploration of the globe, discovery and colonisation of new lands, plagues, The Renaissance, developments in philosophy, science, art, literature and politics continued apace. Magic(k) was an integral part of life in the 16th century. At times it must have been difficult to differentiate between magick and reality, living in the midst of such seemingly eccentric change. 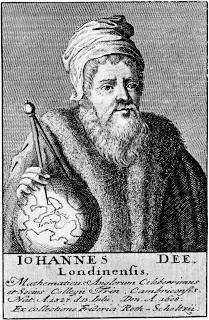 Intellectuals used magick in their efforts to discover "the meaning of life". While men like John Dee, scholar, mathematician, alchemist, occultist, astronomer, and astrologer, had sincere aspirations, they often fell foul of religious leaders who sensed that the knowledge they were aiming to acquire could weaken religion's control of the masses. John Dee was fortunate to enjoy patronage and protection from Queen Elizabeth the First for many years, as her advisor. Lesser mortals, namely women - witches - who involved themselves in magic to help themselves, neighbours and friends, were ostracised at best, tortured and executed at worst.

There's an entertaining article on John Dee by astrologer Dr Z : Who's the Original 007?

Magick in the 16th century, and now, covers a varied range of occult activity, the focus of all: to cause change, material or otherwise. Rituals of various kinds play a major part in magickal preparation. These rituals (I'm guessing) could exert an effect of some abnormal kind upon the proponent's brain function. Sexual connections occasionally crop up too. Don't they always?

A broomstick, accessory of any respectable Hallowe'en witch, was thought, in reality to have been annointed with an ointment made from hallucinogenic plants, the ointment then being transferred to the mucous membrane of the broomstick "rider" for rapid absorption, with the result of...well, a feeling of flying I guess. I feel I should add "Don't try this at home!"

A sexual link can be found in the first few lines of Wikipedia's "Magick" section:

The Anglo-Saxon k in Magick is a means of indicating the kind of magic which Crowley performed. K is the eleventh letter of several alphabets, and eleven is the principal number of magick, because it is the number attributed to the Qliphoth - the underworld of chaotic forces that have to be mentally conquered before magick can be performed. K has other magical implications: it corresponds to the power or shakti aspect of creative energy, for k is the ancient Egyptian khu, the magical power. Specifically, it stands for kteis (vagina), the complement to the wand (or phallus) which is used by the Magician in certain sexual magick aspects of the Great Work

The $64,000 question: does magick work? Is it possible to "cause" change? Some obviously think so, otherwise the idea wouldn't still be around. This desire to change things seems to be tightly woven into human nature. A favourite quote from Edward Fitzgerald's translation of The Rubaiyat of Omar Khayyam:

Ah love! could you and I with Fate conspire
To grasp this sorry scheme of things entire,
Would not we shatter it to bits -
And then Re-mold it nearer to the heart's desire!

A tale from personal experience. Many years ago, after a period of misfortune, ill health and downright bad luck, as a last resort I enlisted the assistance of a so-called magician to change circumstances, by removing what I sensed as a bad influence affecting myself and my late partner. To cut a long story short what he did (if he did anything at all other than take a lot of money from me) might have been instrumental in our losing everything we owned, almost lost our lives too, in a fire. I'll never be certain that there was a connection, but the timing was sinister to say the least.

So.... my advice about magick: leave it alone. Better to be safe, meeting challenges in more usual ways, than sorry after trying to change things using occult means.
Posted by Twilight at Wednesday, July 28, 2010