Views of 2100 & The Future ~ with Cayce, Heinlein, Tennessee Williams and William Stafford 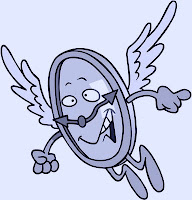 Raiding my Book of Predictions for ideas I randomly opened it at the last page of a section on Edgar Cayce. The last paragraph goes like this:

A believer in reincarnation, Cayce had a dream in 1936 in which he saw himself reborn in 2100AD in Nebraska, which by then will be on the west coast of the US. In this vision he was trying to convince a group of scientists that he had lived some 200 years before. In order to collect evidence of his former life, he flew east in a cigar-shaped metal airship to an island where workmen were clearing rubble and rebuilding a city. When he asked where he was, a worker replied that he was in the former city of New York on Manhattan Island.

Edgar Cayce made numerous predictions which didn't materialise at the time expected -though I guess which may still be in the wings awaiting a more accurate cue. However, the above was simply a dream, but an interesting one to think about. 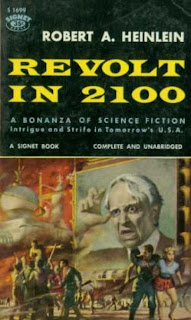 Coincidentally, speaking of 2100, I'm at present reading, rather slowly, Revolt in 2100 by Robert Heinlein. It's part of a trilogy Future History. In the novella If This Goes On... ,which forms the main part of this book of three stories, the scene is set in 2100 in what was the USA. The author describes the country as being ruled by an absolute theocracy, one with all the advantages of hi-tech, married to the worst of mediaeval regimentation and cruelty. If anyone suspects that kind of thing "can't happen here", I'd say, "don't be too sure!"
As the book's title indicates, a revolt is in the works. Heinlein's science fiction view of life in 2100 is scarcely better than that in Edgar Cayce's dream.

I notice, in searching for information about the rest of the Future History trilogy, that the author has been way off in his timing. Sci-fi authors have found this problem tricky for decades, even the best of 'em! Originally written in the 1950s, Heinlein outlined a world, in around 2000 AD, where space travel had been fully mastered, with the US being a leading power in a systemwide imperialism embracing all habitable planets. Highly optimisitic and several centuries too soon!

Apropos nothing in particular I'll throw in that by January 2100 Uranus the rebellious planet will be in mid-Aries, at around the same point it'll be in early in 2016. There are 90 years between now and then, few, if any who are on Earth now will still be around. Even my husband's two great-grandchildren born in January and June this year will, at best, be in their final years.

The future is called "perhaps," which is the only possible thing to call the future. And the only important thing is not to allow that to scare you.
~Tennessee Williams, Orpheus Descending, 1957

I've just discovered William Stafford, an American poet born in Kansas, and love his honest-to-goodness plain style of poetry. No pretentious fluffy flights of fancy, but the ability to use words as triggers so that the reader creates their own flight. He was born on 17 January 1914, with 4 personal planets in Capricorn, between 20 and 29 degrees, and Uranus in Aquarius at 6 degrees, tagging along with the Capricorn stellium. Uranus never just tags along though! The rebel planet manifested in Mr. Stafford via his pacifist stance during World War 2.


Tomorrow will have an island. Before night
I always find it. Then on to the next island.
These places hidden in the day separate
and come forward if you beckon.
But you have to know they are there before they exist.

Some time there will be a tomorrow without any island.
So far, I haven’t let that happen, but after
I’m gone others may become faithless and careless.
Before them will tumble the wide unbroken sea,
and without any hope they will stare at the horizon.

So to you, Friend, I confide my secret:
to be a discoverer you hold close whatever
you find, and after a while you decide
what it is. Then, secure in where you have been,
you turn to the open sea and let go.

hi twilight,
being a kansan, the dream of living in nebraska on the west coast made an impression on me too! maybe we will both have beachfront property someday!
i did a lot of research on cayce for some projects back in my college years and he was a pretty interesting cat, for sure! yes, we must stop short of taking cayce's account of things as gospel, but he offers plenty of food for thought.

I'll not break out the swimsuit yet awhile though. ;-)

Yes, Cayce is interesting, but, like nostradamus, to be approached with caution - my own view.

By the way - any sign of the two padded envelopes send Media Mail yet? Seems as though they ought to have made it to Kansas by now - but I know Media Mail can take up to 21 days sometimes. They were posted 22 June. Perhaps I should make enquiries?

Sci fi timing is often bad. Being too much ahead of your time can be bad for sales. I think it was Marx who said (not an exact quote): great philosophers die in obscurity because their time was not yet.

anthonynorth ~~~ Yes. Authors were very brave to hazard any dates at all, back then. Science fiction was a relatively new genre and the book market - production of cheap paperbacks especially - growing fast, so I suppose, to help sales, they were avoiding mentioning dates too unimaginably far into the future to bring a feel of realism and excitement into things which were otherwise pure fantasy.

I haven't read much sci-fi written in recent years. Maybe authors have learned from predecessors' error and will now avoid mention of the actual time when a story is set. :-)

Shawn Carson told me about you, and I love your site. He was on my very new astrology blog, and he said I should come on over and check yours out, and that you sometimes link to new astrology blogs in your "Trines" section (I love that title, BTW!)

I would be so delighted if you would link my blog as a "Trine". It is @
slushpileastrology.blogspot.com.

Monica ~~ Hi there! Thanks.

Was a huge fan of Cayce back in the day when I would devour all such creatures.
Predictions can't be pinned to earthly time though.
And I think I prefer the Theory of Chaos.
XO
WWW

Hi Twilight,
Yes, 2 more envelopes full of assorted books arrived over a week ago and it seems like I've barely had time to skim the surface lately. I appreciated the gauquelin research and their general take on some of the planets and aspects.
I will happily complete my end of the bargain by making a donation to the elsa website, as you asked. i will tell her that you are responsible for it!
sorry to report that i am having trouble with my outgoing e mails and that is why i am responding about this on your comment section.
at any rate, it was a very kind and thoughtful gesture by you, all the way around and i will always be reminded of you whenever i pick one of those books off my shelf.
one can scarcely have enough reference books into astrology and it is cool to have an authority of sorts to refer to now and again on so many different topics.

Shawn ~~~ Oh - that's a relief!
I'm very happy that the books have found a good home, and that my confidence in the USPS isn't misplaced.

Thanks for your response.

I reckon USPS do a brilliant job. I'll complain regularly and bitterly about the country's political leanings but never about the excellent mail service here. ;-)