A Rotten Day for Sagittarius, A Good Night for Leon Russell

Sagittarius, as seen by Jim Critchfield and Jerry Hopkins, authors of "You Were Born On a Rotten Day", first published 1969. It's an early attempt at astrological humour - at times it seems to have been written by naughty schoolboys. Maybe it was. Any passing Sagittarians reading this should bear that in mind. As for me - I love y'all!

A previous chapter featuring this slim volume, and relating to Scorpio, is HERE.

"Sagittarians are represented by the Centaur - half man and half horse. This makes it extremely difficult to decide where to sleep: lying down on a soft bed or standing up in a stall. It also creates problems at most of the better motels.

Naturally enough this half-and-half symbol produces a dual personality problem, both parts equally unpleasant. This constant conflict keeps coming to the surface and prodding people who are impossible to get along with. A Sagittarius even has trouble making friends with a rubber tree. The nicest person born under this sign was Scrooge.

Sagittarius ruled by Jupiter, the planet of expansion, which explains their love of eating. They will eat just about anything, and too much of it. Let's face it Sagittarius, you are a fat person. But you are not without hope. You sit around hoping a lot, wear wishing rings and spend hours throwing pennies into wells.

By the way, your compatible sign is "No Left Turn", your Birthstone is fake, your Lucky Number is missing, and your Lucky Star is having a thing with her agent.

This conflict also brings about another problem - the inability to make decisions. Ninety percent of old maids are Sagittarius-born (the other ten percent are gay)."

Leon didn't disappoint. He and his band gave us a great rockin' show. Leon appears frail, walks with difficulty, using a cane, but once he starts to sing, his voice is anything but frail. Without any ado or introduction, after the audience's welcoming standing ovation, he ploughed straight into a non-stop medley of some of his best known numbers, then on to some lesser known songs. It was probably 20 to 30 minutes in before he spoke. When he did I warmed to him at once. Instead of the rather strangulated, nasal tone of his singing voice, his speaking voice is deep and warm. In spite of many years living in Los Angeles, he hasn't lost his kindly, comfortable Okie accent.

Leon told us a couple of stories of the days when he was, as he described it "more high profile", and had delighted in the company and friendship of other musical icons. I wish he'd done more of the chat, but naturally, the audience had come to hear the music, so he kept it to a minumum. He told us how he met Bob Dylan, liked him a lot, and they became friends. He said he often used to sing some of his songs, then for a time stopped doing so. In an almost throw-away aside he said, "But now that old GW and his boys are running around, I'd better start singing them again" - and launched into "A Hard Rain's Gonna Fall"! HeWhoKnows gave a loud whoop as did certain family members several rows behind us. Most of the audience either didn't catch what Leon had said, or chose not to acknowledge it. That one comment endeared him to me! As did his lovely version of "Georgia On My Mind" - one of my favourite songs.

There was no break, instead Leon remained at his keyboard while the band members took turns to leave the stage. The lead guitarist did an excellent solo blues number, and the keyboard player gave a very creditable rendition of a country-style song. Then, Leon, alone on stage but for the other keyboard player, sang his space and time masterpiece, "A Song For You". It wasn't a straight copy of the recorded version - he embellished it and played with it a little - which was good. We can hear the recorded version any time, but I think that a live performance ought always to add a little something to what we already know.

After another standing ovation, the band returned for a heavy rockin' number with sound cranked up. Then Leon told us that this would be the point where, normally, bands leave the stage, we applaud and wait for an encore.

"You'll have to imagine that has happened", Leon advised us, "I don't like walking, and I'm getting too old for all that nonsense". They launched into a medley of old rock songs from the 60s and 70s - once again earning a standing ovation.

It was a good night for Leon.

We were a little too far away to get a good shot of him, but this is one from the camera of HeWhoKnows: 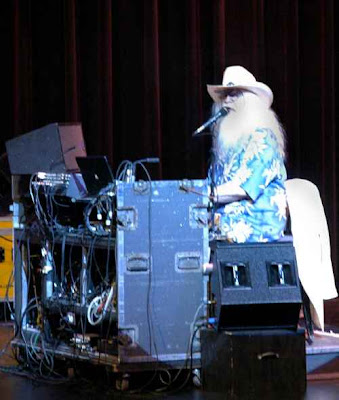 This comment arrived by e-mail because it failed to publish. I'm copying it because it could be of interest to Leon fans who land here via Google search. It's from my husband's son-in-law, VP of the Arts Council and arranger of the concert:

"Leon moves slowly because he was in two motorcycle accidents in the '80s in which both of his legs were severly injured. Plus, he is 65 and hasn't always treated his body like a temple! Something most people also don't know about him, which I noticed again when escorting him to and from the stage to his van - he was partially paralyzed on the right side at birth, which has left him with a right arm that just kind of hangs limp at his side when he walks. That affliction makes it even more amazing that he's a virtuoso on piano and guitar.
The song the organist sang is "Rosie" by Jackson Browne. The organist and lead guitarist, by the by, have only been with Leon for 2 months, but I thought overall it was the best band he's had since the early '80s.
Leon has always loved to cover Dylan songs and has done some of the most innovative remakes of Bob's songs. He's always done 1 or 2 in concerts but just hadn't done "Hard Rain" in public for a while. (He also did Dylan's "It Takes a Lot to Laugh, It Takes a Train to Cry" in Saturday's concert, which is one of his best Dylan covers.) Ironically, in the movie 'Remember the Titans," the soundtrack includes Leon's version of "Hard Rain" - it's played when the high school football players are taking an early-morning training run through the mist on the battlefield at Gettysburg.
Our crowd was nearly 690, which meant about 60-70 empty seats, all of which belonged to season ticket holders. It's the second-largest crowd we've drawn for a concert since the CTAC took over the series in 2001. We knew some season ticket holders would have no interest in Leon and we also knew we were contending with Xmas parades in 4 area towns and OU playing football on TV. But the general admission ticket buyers turned out in force.
We lost about 2 dozen people in the first half of the show because the music was too loud. And even the Leon Lifers who stayed on through the whole thing felt the music was right at the edge of being at an uncomfortable volume. What they don't know is that we spent extra money to bring in a technical experts from an OKC sound company who've worked Leon's concerts before, and they were able to control things enough that there wasn't any distortion. Leon has always loved to play loud, and after all, it is rock 'n' roll!
Talk about reclusive: Leon had played in Fayetteville, Ark. on Friday night and they drove straight through to Duncan. They arrived about 8:30 a.m. and parked in back of the Simmons Center, and Leon didn't emerge from the van until 5 minutes before it was time to go on stage, then he immediately went back to the van after leaving the stage. He did, though, sign autographs at the van for people who ventured back - they just wouldn't let us announce that he was willing to do that. Fred, it was just like in Lawton: People handed their item to the bus driver, who took it in to Leon, who signed it and the bus driver returned it!! I still swear those autographs we got that night probably belonged to the bus driver!!!!!
Aside from the 3 blues songs Leon sang, all of the other oldies were music by groups and artists with which he's been associated in the past as a touring partner, session musician, songwriter or producer.
Leon has a long history of making social and political statements, especially on his first four albums. As reference, I'd suggest listening to the following:
- 1969 album "Asylum Choir II" with Marc Benno. Cuts: "Sweet Home Chicago," "Down on the Base," "Tryin' to Stay Alive" and "Ballad for a Soldier," which is a truly biting shot at the war and military.
- 1970 album "Leon Russell." The album introduced "A Song for You," but it also contained "Shootout On the Plantation," "Prince of Peace," "Give Peace a Chance" (Not the John Lennon song, but a Leon original that was popularized by Delaney and Bonnie) and "Roll Away the Stone."
- 1971 album "Leon Russell & The Shelter People." Cuts: "Stranger in a Strange Land," "Of Thee I Sing," "Alcatraz" and a cover of George Harrison's "Beware of Darkness." Also has his versions of "Hard Rain" and "It Takes a Lot to Laugh."
- 1972 album "Carney." Mainly a lot of fun and love songs, but the album did introduce "This Masquerade" and "Tightrope," his only top 10 solo song. It also includes "If The Shoe Fits," which is a terse bit of sarcasm directed at the music media and "Magic Mirror," one of the most introspective songs ever written.
Ann, all of these cuts are still very relevant today, and if Fred doesn't have them, I do.
OK, I guess I've revealed myself to be a total Leon Russell freak! But, hey, there are a lot worse things to be. My biggest thrill at the concert was that he was in good voice (at least, as good as can be expected), that he and the musicians said they had a good time and he was also more interactive with the audience than during any of the previous six concerts of his I've attended."

I've compared your natal chart with Leon's - I can see why you connect to his music!