Coming up tomorrow -17th December - The Lord of Misrule


The first day of the Roman festival Saturnalia.
It was a period of great feasting and festivity, with a lot of
drinking and eating. Slaves would become masters for the
festival, and everything was turned upside down. This part
of the Roman festival survived into the 17th Century.


Saturnalia in our world will not look quite like this, not unless the finger printing staff at the Immigration and Citizenship Office in Oklahoma City are having an off day (or on-day?) Or unless HeWhoKnows decides to let his hair down. 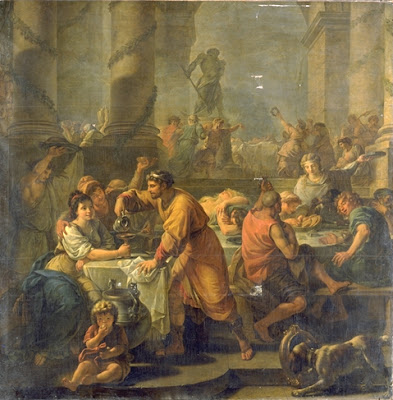 This'll be our version of it.
Good old Saturn - gotta love him!

Tomorrow, 17 December, Saturnalia for us will be spent acknowledging a different side of Saturn - laws, government, red tape. It's the date I've been summoned for fingerprinting at the "local" office of the Immigration and Citizenship Service, 80 miles distant. There'll be a gaggle of planets in Sagittarius quite close to my natal Venus (19.59 Sagittarius), so I'm thinking that I'll adopt Sagittarius as "the immigrant's sign".

This will be the third, or maybe fourth time they've taken my prints. This time, I understand they are to assist in a background check to be carried out by the FBI. Yet another background check. (All very Saturnian!) They've done it all before, too, when they first allowed me into these shores, as Mrs.HeWhoKnows. They are insatiable!

I'm told, also, that notification of a date for my main interview and test on civics may be expected "within 365 days". No voting for me in 2008 then. Yet more Saturnian limitations.

Due to wintery weather here, lots of ice, we're going off to the City later today and hope to find a nice warm motel where the power has been restored after last week's ice storm. Blogging will probably be suspended until Tuesday. Brrrrrr!
Posted by Twilight at Sunday, December 16, 2007

Ah! How well I remember the eternal fingerprinting, photographing, and general who-ha of living permanently in America. We truly may as well be Martian "aliens", for all the rubbish we have to endure. "Aliens", indeed! How I despise that term. Thankfully, my permanent residency doesn't now need to be renewed for ten years - bliss! As I've mentioned before - citizenship? Never in a million years!

We had about eight inches of snow in the last 24 hours in Illinois. Power's still on, though, thank goodness. Our ice storm was last year - November 28th - that was rough. Enjoy your stay in the city.

Well, my 10 year greencard would probably have seen me out, RJ - but as a citizen I'll have much more freedom to come and go, and stay away for extended lengths of time. I felt that it might be worth all the hassle to have that option, the way things are going. A kind of insurance policy! Hope I won't need it, but I'm counting on nothing. :-)