Innuendo, eroticism from Rockwell and Leyendecker? 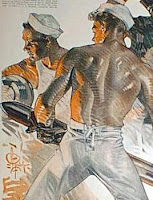 Continuing yesterday's theme, a look at two of the most popular, prolific and talented illustrators of them all from The Golden Age: Joseph Christian Leyendecker and Norman Rockwell.

Leyendecker was born in Germany but came to the USA as a child, with his parents (small illustration, left, is one of his). Rockwell, born 20 years later, idolized Leyendecker, it's easy to see similarities in their work. Both were perfectionists, and although both became fabulously wealthy - like pop stars of their time, neither could be said to have led an idyllic life. Their devotion to their art must have exacted a toll on their personal lives. Rockwell suffered from bouts of depression. He married three times, two of his wives also suffered from depression, and there are suspicions of suicide attempts in both cases. Leyendecker was gay. Nowadays we would say, "So what?" Back then it was not an easy lifestyle, too much publicity of the fact could have cut short a promising career.

Norman Rockwell's stereotypical homespun American scenes earned him the affection of the public. It has been suggested, in recent years, that there is hidden innuendo in some of his illustrations. This is really a case of "to the pure, all things are pure"....and the opposite applies! Perhaps Rockwell did, occasionally, insert items which could be seen as suggestive - playful, mischievous additions, which only those looking for such things would see. Most people didn't see them, and those who did, until fairly recently, kept quiet about it! For instance, is there a phallic symbol in his "Rosie the Riveter" illustration on the right? 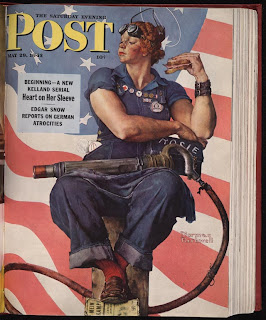 Leyendecker also used mild eroticism (see top of post) in some of his illustrations for commercial advertisements. He realised, good businessman that he was, that sex sells, and most of the work of both artists was used as some kind of "come-on" to customers.

Rockwell's chart is on the right, Leyendecker (12 noon version) left... should enlarge with a click.

There's an Air Grand Trine in Rockwell's chart, linking Mercury with Saturn and the Neptune/Pluto conjunction - a combination of communication, hard work, power and imagination - which served him well. His Scorpio ascendant may be linked with his bouts of depression. Scorpio is a highly emotional sign, fairly incompatible with his Aquarius Sun, and not too happy with Capricorn Moon either. Virgo at midheaven signifies his perfectionism. Sun and Mercury in humanitarian Aquarius, in my view, accounts for his insight into "the human condition", the way he was able to perceive the fun, the sadness, or the sentimental in everyday life, and paint these for the public to share. It's ironic that his own life didn't match his illustrations. Perhaps depicted life as he would have liked to experience it.

J.C.Leyendecker was born in Montabaur, Germany on 23 March 1874 (no time of birth available).
Sun, Venus and Neptune in Aries. Saturn in Aquarius (the sign it traditionally rules), opposing Aquarius's modern ruler Uranus in Leo. A strong opposition which may or may not relate to the challenge of being a gay man in those days. It was a newly acknowledged way of life, and challenged the establishment (as far as sexual orientation was concerned). A Mercury in Pisces/Jupiter in Virgo opposition involves mutual reception(each planet in the other's home sign) making each more potent. Mercury, the communication planet and Jupiter the publishing planet, two hugely important factors in Leyendecker's career are given emphasis. The perfectionist traits of Virgo, too are here. I wouldn't be surprised to find Virgo as his rising sign.

Sources:
Biography of Norman Rockwell (one of many)
Reconstructing Rockwell by Christina Larson
How Innocent Was He? by Richard Halpern
Leyendecker biography
more Leyendecker
Explore Google Image for more examples of the art of these two illustrators.
Posted by Twilight at Friday, December 07, 2007

The Fred Jones Museum of Art on the OU campus has one Rockwell original. It is quite surprising, as it doesn't convey the usual feel-good innocence that most people associate with his works. You can see it here http://www.ou.edu/fjjma/collections/american/rockwell_rebel.html
or get Dad to take you some day. They have a number of other interesting pieces.

Thanks for the link, kal.

OU campus will be on our itinerary one day soon, then.