We saw the movie "The Golden Compass" on Friday evening. After publicity indicating that the film is "anti-religion", we doubted that our local movie theater would be showing it - so were pleasantly surprised. I guessed the film wouldn't be as controversial as was publicised, and I was right. But there is a message in the film which fits with Pluto's imminent move into Capricorn, touched on here yesterday.

From information gleaned via Google, it appears that the books do have a more overtly anti-religious message than this movie, and one which grows more insistent as the trilogy moves along. In the movie, the plot seems to have been considerably diluted, and unless one has read the books, it would be hard to detect any message that is specifically anti-religion.

I went with an open mind, and came away with an anti-establishment, anti-brain-washing, pro-freedom message rather than one of anti-religion. I got a feel more akin to that of "V for Vendetta", albeit with a more fantastical backdrop and spectacular special effects. 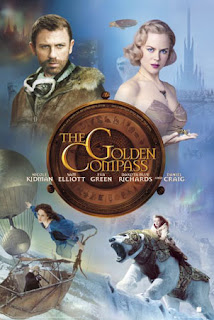 "The Golden Compass" will probably offer different messages to different viewers, but all with a theme of individual efforts to break down tyranny, dominance of institutions, and restriction of human freedoms. These are all aspects of Pluto in Capricorn - plain as day!

A movie review which I particularly liked for its fairness and insight is at Sprituality and Practice. It gives away much of the plot though, so anyone planning to see the film is warned!

The review ends: "We wish her (the heroine) well and hope that youth will take this movie to heart, especially its call to be wary of all institutions that stifle the soul and try to limit the spiritual search for truth."

I'll confess that my primary reason for wanting to see this movie was that Sam Elliott is in it. It turned out that Sam Elliott, as a come-on, introduced me to a fascinating tale. I'll be watching for the almost inevitable sequel, with relish.
Posted by Twilight at Sunday, December 09, 2007

I haven't seen this movie yet and probably won't. I was reminded when you said Sam Elliot is in it that it's hard to tell if he's really acting since he is so visceral, so much his character, in every role! I think Hollywood skipped over him when he might have enjoyed the popularity of whathisname, uh, Viggo Mortensen. I think they should have found Sam a role in Lord Of The Rings, even if not Aragorn. Guess he would have stolen too much thundeer.

My favourite role of his is Wade Garret in "Road House".

But anything he does draws me in - I guess that's visceral?

He should be much more famous than he is. He's well known around these parts, but I've mentioned him to others, in Britain, and they'd say "Who?" :-)